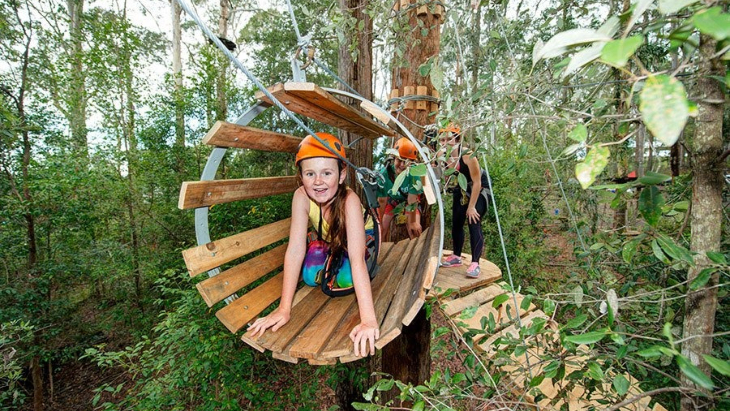 Parks and playgrounds are an absolute lifeline for parents with rambunctious youngsters—especially when large gardens and outdoor spaces at home just aren’t a reality for the majority of Sydney kids.

Luckily, in addition to the great existing range of playgrounds that pepper our city, there are a fair few new and upgrades to existing ones in the works, too. Here’s what you need to know.

If you live on the North Shore you're going to be thrilled to hear about the new Bobbin Head Playground. Built with nature and imaginative play in mind, the upgrades to Bobbin Head playground include:

North Bondi's Barracluff Park and playground upgrade is an eagerly awaited one within the Eastern suburbs community.

The plan involved increasing the target age range for play equipment and experiences, improving seating, picnic settings and drinking fountains, and improving universal access to the playground and through the park. The new Barracluff Park playground has doubled in size and includes nature and wild play areas, better equipment and a tennis wall.

The Wentworthville Memorial Swimming Centre has opened after a mega $12+ million-dollar makeover and over two years of works being done and just wait until you take a look at the new digs. Additions to the new Wentworthville pool include a brand-new Olympic-sized swimming pool, lifts for people with disabilities, a new learn-to-swim pool, a splash pad, children’s playground with pirate ship, changing rooms, and a new kiosk.

As part of a huge upgrade to Arthur Phillip Park in Northmead, there is a new playground incoming! The proposed playground has been designed to be an accessible play space for users of all physical abilities—shifting the focus away from disability, and encouraging all users to play together, ensuring that all areas of the playground are exciting engaging and challenging for everyone.

As part of a staged delivery plan, the concept plan for the playground will include a large natural play area, including opportunities for children to engage with natural materials such as logs, balance beams, steppers, climbable boulders and cubby house structures! As additional funding becomes available a new nature-based water playground is on the agenda for Arthur Phillip Park.

There’s no current completion date for this upgrade, but we’re hopeful it won’t be too long!

Alongside increasing wildlife habitat and garden beds, the upgrade to Ernest Pedersen Reserve in Glebe includes a redesigned play area for younger children, as well as new play equipment for nature play including a sandstone balance wall, stepping stones and logs, a timber swing and a see-saw and bark mulch and softball.

The work is due to be completed mid-late July and will be suitable for toddlers through to primary school-aged children.

Ok, it’s not due for completion until November 2022, but we couldn’t not mention Campbelltown Billabong Parklands; and the incredible $31 million state-of-the-art water recreation space that will grace the city next year.

The project includes a range of recreational water play facilities, landscaped areas, parklands and amenities over the four-hectare site, including a stream, swimming lagoon and a zero-depth play area.