A Lost City of Adventures is Coming to the Blue Mountains 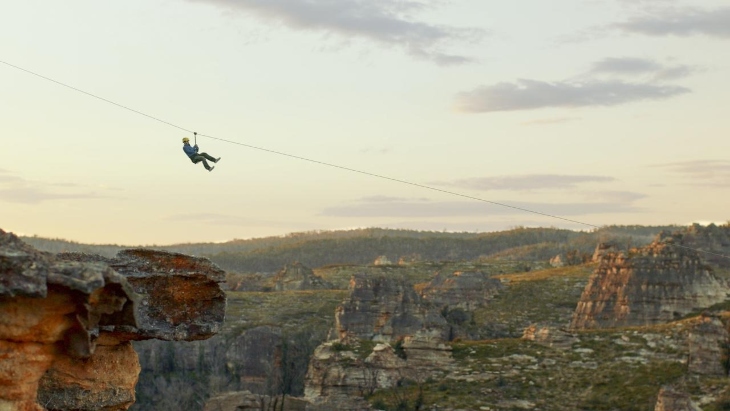 $50-million dollars is being splashed out to transform and preserve one of NSW's most unique natural sites in the Blue Mountains.

The new eco-tourism adventure destination in the Blue Mountains is set to include Australia’s longest zip-line, an elevated canyon walk, safari-style accommodation and plenty more.

The Gardens of Stone National Park, which is bordered by the Blue Mountains National Park, Wollemi National Park, and Lithgow, is set to receive one mega facelift, with $50-million dollars earmarked to transform 30,000 hectares of the spectacular ancient ‘Gardens of Stone’ and ‘Lost City’ sites into the largest and most impressive eco-tourism adventure parks the state has ever seen.

While there's no denying that the Blue Mountains National Park and surrounding natural attractions are pretty spectacular, the addition of the new Lost City Adventure Destination is set to catapult one of NSW's most famous national landmarks into a whole other realm in terms of its tourist attraction status and environmental preservation status.

In speaking to NINE News,  NSW Premier, Dominic Perrotett said "This is one of the most important environmental announcements this government has made."

"This new set of reserves will improve access to this spectacular region attracting domestic and international tourists," he said.

Visitors to the new Lost City Adventure Destination can add multiple attractions to their itinerary, including:

Also speaking to NINE News, NSW Treasurer, Matt Kean said "This new set of reserves will rival the Three Sisters in Katoomba as the destination for visitors and tourists to the mountains west of Sydney."

"It will also provide a much-needed lasting legacy for the environment, protecting and providing habitat for numerous threatened and endangered species for future generations", he added.

The first stages of the new Lost City Adventure Destination are expected to be completed by early 2023 - we seriously can't wait!