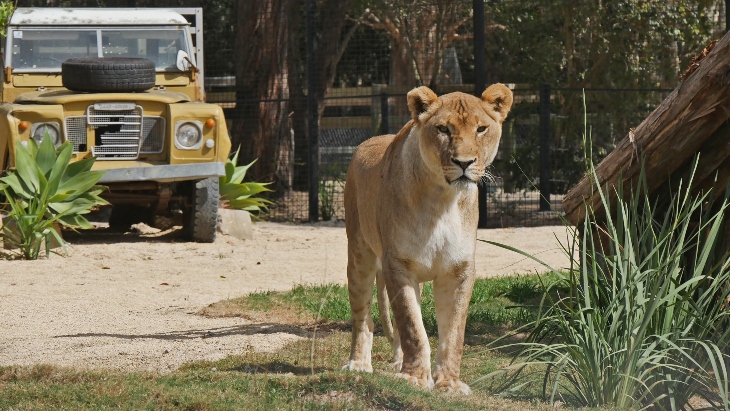 We love new openings here at ellaslist, particularly when we've been confined to the four walls of our homes for so long! One of the biggest openings we've been looking forward to at ellaslist is a brand-new zoo that's opened just over an hour outside of Sydney!

Central Coast Zoo in Wyong Creek is open to the public and is home to some big-wig animals from the animal kingdom, including a pride of full-grown lions!

Central Coast Zoo was ready to open in spring 2021, but lockdown had other plans, and the opening date has been pushed back a few times. While staff at the new zoo have been pretty tight-lipped about their official opening date, they have been sharing plenty of exciting snippets on their Facebook page, including the arrival of all of their exotic animals and the opening of their exclusive animal encounters (more on that below!).

The new zoo has officially opened for private animal encounters. Located within the grounds of Amazement Farm & Fun Park, booking an encounter through Central Coast Zoo includes admission and access to Amazement and its facilities, shows, rides and animals.

Animal lovers can start getting excited as the new zoo will be teeming with them, from small critters to big and boisterous beasts. African lions, lionesses, meerkats, snakes, foxes, African servals, ostriches, iguanas, tortoises, alligators and plenty more are currently settling into their new home at Central Coast Zoo.

While visitors aren't yet allowed to wander the zoo freely, animal encounters are available and are already a massive drawcard for the new animal park. Private animal encounters can be booked online and give visitors the chance to meet the new residents of the zoo, including meerkats, exotic reptiles, monkeys and even lions!

One of the most highly-anticipated animal arrivals at the new zoo is a pride of six full-grown lions fresh from their previous home touring with Australia's Stardust Circus. The three brothers and three sisters were star attractions of Stardust Circus, but, unfortunately, due to Covid-19, they couldn't continue touring with the circus.

According to zoo owner Jenny James, "There was no zoo in Australia that had the facilities to rehome all six animals as their existing pride. Some zoos offered to rehome one, two or four animals but could not take on a new pride of six, so Central Coast Zoo began to build an amazing home for these majestic creatures."

The zoo's team leader of exotic animals, Caroline Shemwell, says "Everything went well and it's a real privilege to have them here".

Where is Central Coast Zoo?

The new zoo is located in Wyong, just over an hour north of Sydney and is neighbours with the Central Coast's Amusement Farm and Fun Park.

When is the new Zoo Opening?

The official opening date for Central Coast Zoo has not been released, but visitors can book private animal encounters 7 days a week via the website.

Other New Openings to Look Forward to

Central Coast Zoo visit today 30 Jan 2021, was fantastic, we, went thinking we would be there only til lunchtime, but didn't leave til closing. The train ride was great value, the deer in the forest, feeding the camels, ostrich were fun, definitely worth a visit especially for family. We had originally planned to visit Hunter Valley Zoo, but when comparing value Central Coast Zoo was 10/10. We did a Meerkat Experience which tickets included the entry, train and beautiful meerkats. Will definitely go again and take the grandkids next time.