A Brief But Wild History of Luna Park Sydney One of Sydney’s greatest icons is celebrating its 85th birthday this October, and this perpetually happy camper still knows how to kick up their heels!

Flashing its signature smile, Luna Park is opening its big pearly whites for a huge celebratory extravaganza! In a birthday bash befitting such a massive milestone, the festivities will continue throughout the October school holidays.

While we can’t wait to party, this beloved octogenarian also deserves a little reflection. Just how did Luna Park come to perch itself on the edge of Sydney Harbour back in 1935 and continue winning hearts for almost a century?

As you’d expect from one who has stood the test of time, the theme park’s history is as colourful as it is long, with as many twists and turns as the Wild Mouse! 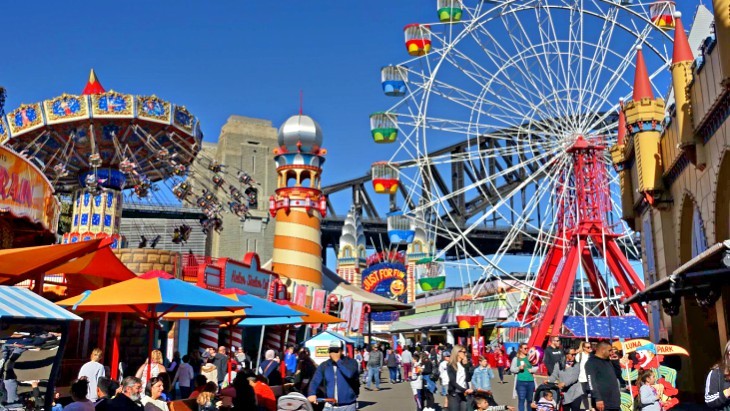 Modelled on the first Luna Park that was a raging success on New York’s Coney Island, American entrepreneurs brought the concept to Australia, opening similar parks in Melbourne in 1912 and Adelaide in 1930.

While Adelaide’s Luna Park Glenelg was a hit, keeping spirits high throughout the Depression, the park was denied permission to expand, and the owners, forced to seek out a new location, finally stumbled on the vacant former Harbour Bridge factory site. Hello, Harbour City!

Glenelg’s loss was Sydney’s gain, as rides like the Big Dipper and River Caves were relocated to create the park, ensuring a triumphant new beginning on 4th October 1935, and continuing its success under the same owners until 1969. At that point, the equipment and remaining lease of Luna Park was sold to developers, who proposed a multi-storey Trade Centre. However, the Government rejected the bid, opting to preserve the precious open spaces along the Sydney Harbour foreshore.

So, thankfully, the shareholders continued to run the site as an amusement park. 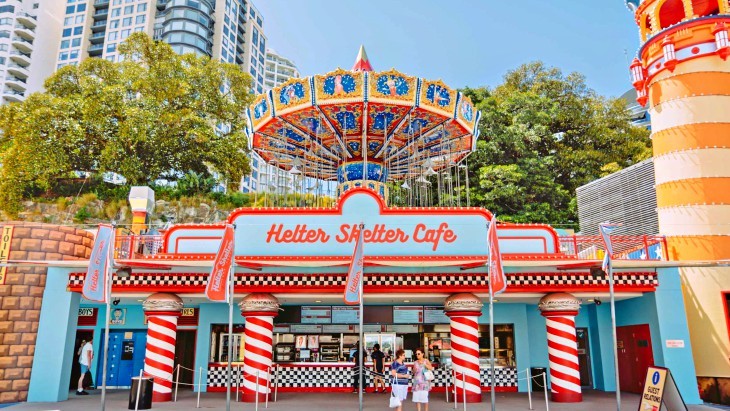 Every winter until 1972, Luna Park would close so existing rides could be overhauled and new attractions could be sourced from overseas. During the ’50s and ’60s, rides including the Rotor and Wild Mouse were introduced, which still operate today. Much of the original Art Deco style fantasy architecture has also been retained. In the 70s, a group of popular Australian artists were commissioned to redecorate the Park.

But there was a change of fortune in June 1979, when a fatal fire claimed the lives of seven people on the Ghost Train. It was Luna Park’s darkest day. The lease ended and the NSW Government sought a new operator, with little success, forcing the park’s closure.

In the aftermath of this uncertainty, a beacon of light emerged! ‘Friends of Luna Park’ was formed, which included a large number of the artists who contributed to the revitalisation of the park ‘70s, and they continued to campaign to save Luna Park from the threat of demolition.

And hurrah - it worked! In 1981 a new operator was awarded custody of the giant smiley face and the park reopened in May the following year.

Alas, by 1988 the park closed again, this time for renovations after an attempt to redevelop the site as a high rise adult entertainment centre was shared publicly. By 1990, the lease was once again terminated after the amusement park failed to re-open on deadline. The Government took control and a heritage study was commissioned, leading to major restoration of the main buildings and a new public foreshore boardwalk in the following years. A new roller coaster and other rides were also installed.

On 20 January 1995, Luna Park re-opened under the NSW Government’s Luna Park Reserve Trust and a private carnival operator. However, pesky neighbours complained about the noise from the Big Dipper, initiating a legal dispute that forced a reduction of the ride’s operating hours.

The bad luck continued in 1996, as financial difficulties forced the park to close. After a long hiatus, new owners took over the lease in 1999, but in 2001 they made a sad goodbye to the iconic Big Dipper following the continued noise complaints.

In 2002, things were looking up! The leaseholder formed Luna Park Sydney Pty Ltd and the new company took over the 40-year lease. A total refurbishment of buildings and rides began to breath new life into the embattled park.

On 4 April 2004, the Luna Park that we know and love reopened, retaining the unique identity and heritage of the site while adding a Big Top auditorium, carpark, restaurant and function facilities. In late 2013, some much-anticipated arrivals passed through the gates. Introducing its first new rides since the park reopened in 2001, Luna Park welcomed the exhilarating Hair Raiser and the beloved Carousel. The Tango Train was added in 2016 and in 2019, Volare - Australia’s highest and largest Wave Swinger - made its debut.

With overwhelming support from Sydneysiders and travellers that have loved the long-running amusement park, it’s now 2020 and time to party!

Pay tribute to the tears and triumphs and join the fun at Luna Park Sydney from 25 September to 11 October for a unique festival experience. There will be exclusive birthday entertainment from the Showtime team and the chance to win amazing prizes in the Birthday Bonanza giveaway, plus good old family fun with classic carnival games and all-time favourites.

Tickets are $50 per guest with Unlimited Rides for your session. Find out more at LunaParkSydney.