Top Train Rides & Activities for Kids In & Around Sydney 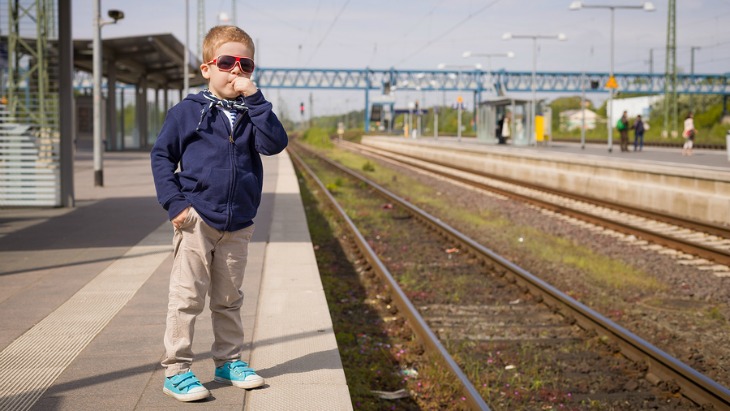 It's no secret that kids love trains! Boys and girls alike are entranced by the clickety-clack and chugga-chug of engines from the time they are tots. Trains on the telly have always been on high rotation at my house, starting with Thomas and Friends, Driver Dan’s Story Train and Dinosaur Train. Moving on, of course, to the famous Hogwarts Express featured in Harry Potter!

We’ve been doing a bit of digging to find Sydney’s Best Train Activities for Kids, so your kids can experience the real deal. Here are our top picks…

Scenic World in the Blue Mountains offers a variety of different experiences and they are all spectacular (Read this for the best bits). And for the train mad, the Scenic Railway is the main attraction. It’s the steepest incline railway in the world, with a 415m descent which takes you through a cliff side tunnel down into an ancient rainforest. The ride itself is quite short but from here, you can explore the Scenic Walkway; 2.8kms of boardwalk through the ancient rainforest, including 380 metres of wheelchair and pram accessible terrain. The scenery is amazing, with plenty of great family photo opportunities.

Catch the Scenic Cableway back up the incline – it’s the steepest aerial cable car in the Southern Hemisphere. If you have time, check out the Scenic Skyway. It takes you on a 720-metre journey, 270m above ancient ravines and dazzling waterfalls, over Jurassic rainforests. You’ll get 360-degree views of the iconic Three Sisters, Katoomba Falls, the Jamison Valley and best of all, the floor slides away to reveal a glass bottom so you really do feel as if you’re floating on air! Scenic World is very family friendly and all experiences are suitable for children of any age.

For a warm-up, check out the fabulous Powerhouse Museum. A visit to Australia’s most popular museum is one of our all time favourite low-cost activities for kids in Sydney. It is the perfect rainy day destination and best of all, the Museum is suitable for toddlers right through to young adults. 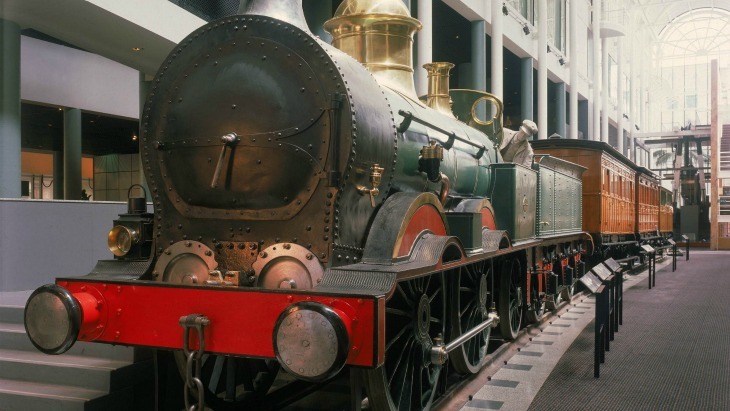 The first exhibition you’ll come to is Locomotive No. 1. Our kids were literally speechless and completely awestruck the first time they caught eyes on this magnificent old engine. On permanent display, Locomotive No. 1 hauled NSW’s first passenger train. Peek through the train’s window and see characters from the 1800′s and listen to snippets of their conversation. This locomotive is one of the most important objects in the Museum’s collection and has been in the Museum’s possession for more than 120 years.

Make your way to the Transport exhibition on level 2 which features trains and trams as well as cars, space craft and horse and carriage. Here you’ll find Locomotive 1243, one of the few surviving 19th-century passenger locomotives built in NSW. Kids can step on board and blow the whistle and hear characters from the 1800′s discussing their roles on board the great trains in days gone by.

The trains come puffing (literally!) into the Hunter Valley every April for the annual Hunter Valley Steamfest. Featuring a diverse range of family-friendly entertainment - from carnival rides to market stalls, roving performances, live music and of course real-life steam trains, a day at Steamfest feels like you've stepped back in time to a 1950s carnival. Held in and around the Maitland Station Precinct, kids and kids-at-heart can ogle at the impressive line-up of machinery on display. Hear the toot-toot of the train whistles as the steam trains take off from the platform and get swept up in the historical significance of the Show 'n Shine Display of over 500 classic cars and vintage hot-rods. 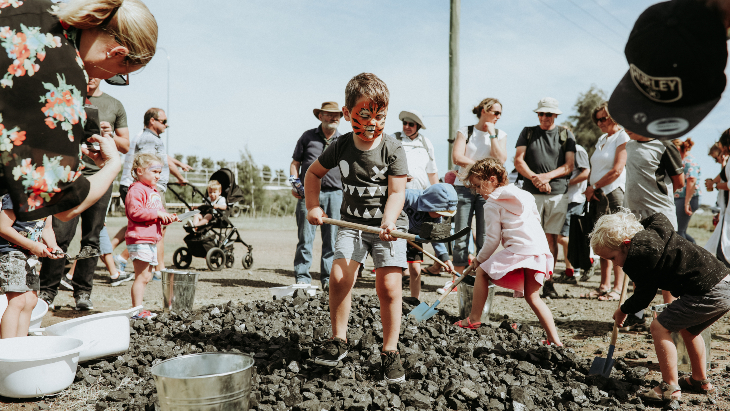 The highlight of Steamfest is undoubtedly the vintage steam and diesel trains that run on Saturdays for eager adventurers to take a ride. Be transported back in time to when steam power was the height of locomotive technology. Ticket holders can sit back and enjoy the picturesque surrounds of the Hunter Valley from your comfy carriage onboard one of Sydney's oldest steam trains. Your little train enthusiasts definitely won't want to miss this ride! 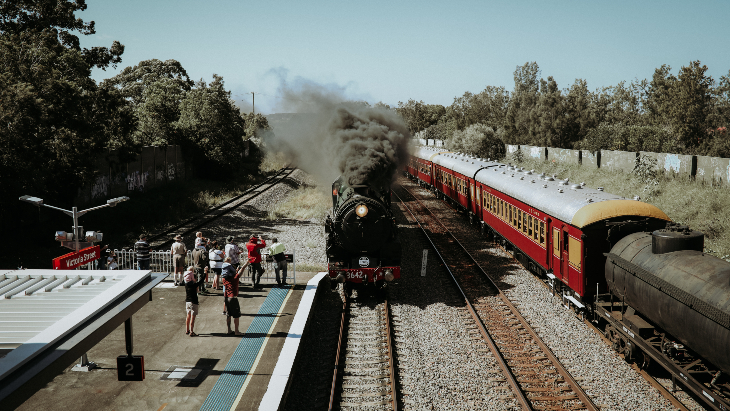 Formerly known as Trainworks. Head to historic Thirlmere for one of NSW’s top train spots. NSW Rail Museum is one of the biggest train and rail attractions in the Southern Hemisphere! There is plenty of history on offer.  You can see magnificent old steam engines and carriages and learn about the history of train travel, building and industry in NSW. Kids will find plenty to do at Trainworks - there’s a train inspired playground and a locomotive, steam machine, special-purpose carriages such as the mail van, sleeping and dining cars that kids can climb in and explore. There are interactive displays and behind the scene behind-the-scenes views of maintenance and conservation of the heritage fleet in the roundhouse.

One of Trainworks biggest special events is their Day Out With Thomas running several times throughout the year. Thomas and his friends visit on selected weekends during school holidays. Meet the full-sized Thomas the Tank Engine and take a genuine steam train ride from Sodor Island Railway Station pulled by Donald the black engine, see Toby, Henry and the Fat Controller as he oversees all of the exciting activities on offer. The day includes mini-train rides, Thomas movie, jumping castles, inflatable slide, face painting and storytelling. Read ellaslist Explorer Sarah’s review of her family day out with Thomas.

Another way to get up close and personal with Thomas the Tank Engine is thanks to the TrackSAFE Foundation run by the NSW Government. Held every year at Central Railway station (August 12-13 2018), the 90min fun rail safety learning sessions run every 15 minutes between 8am and 3pm. This event is suitable for 2 to 5 year olds and their parents and carers. Bookings are essential and tickets, only $5 per child including goodie bag, chug out super fast. 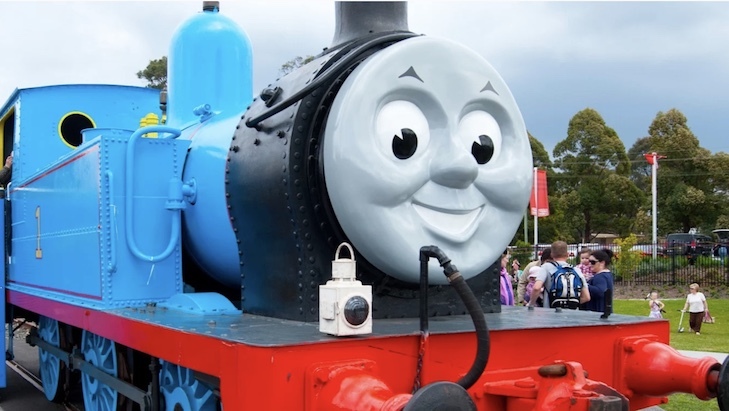 Mini train enthusiasts will love getting close to the action on these ride-on miniature trains. It’s a fun family activity that won’t break the bank. Don’t forget to wear closed toe shoes.

Wascoe Siding Miniature Railway in Blaxland (Lower Blue Mountains) is open 10am-4pm on the first Sunday of every month (except January). Run by a host of volunteers who clearly love sharing their passion for trains with the young and old! It’s free entry and costs just $4 per person. (pictured)

The Sydney Live Steam Locomotive Society in north-west Sydney has three miniature steam locomotives. The park grounds are a popular location for children’s birthday parties or small group afternoon gatherings. For the enthusiast, it is a good spot to just lie back and watch those steam trains work hard pulling heavily loaded passenger trains. Public Running Days are on the third Saturday afternoon of each month from 1.30pm. Entry is $4 for adults and $2 for children. Rides are $2 each for all ages CASH ONLY.

Hornsby Model Engineers open their grounds to the public on the second Sunday of every month. Gates open at 9:30 – rides from 10 am to 3 pm. Enjoy a train ride with the kids, watch the action or check out the working model railways. Entry for adults is $8, kids free. Rides are $2.50 per person. 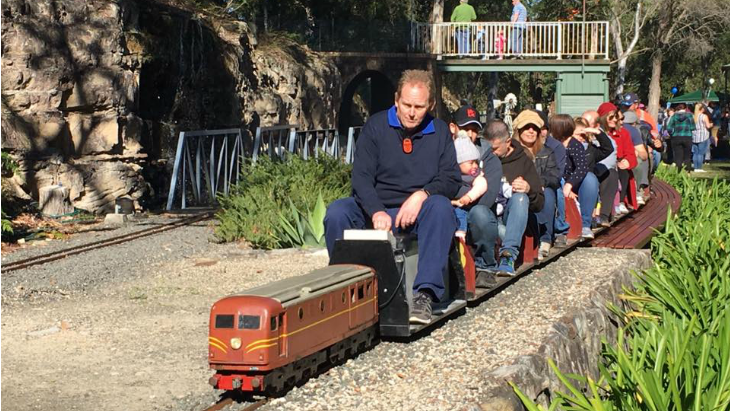 Every Sunday you can visit Sydney Olympic Park for Riding the Rails. These short train rides take visitors on a round part of the former Royal Australian Navy Armament Depot – now a 52-hectare heritage site known as Newington Armory. This informative tour on board the heritage-listed electric railway shows how wartime workers moved bombs, bullets and armament around the historic site. There are more than 100 buildings dating back to the 1890s, including explosives storehouses and workshops, cottages and wharf. The kids will learn plenty of facts about the various building designs and usage, during this guided tour and will have the chance to explore the armament display up close, in what is still a restricted-access building.

The family can easily spend the day at Olympic Park – there is a great choice for parks, playgrounds and picnic areas to explore, and make sure you check out our favourite aquatic centre and water playground, . 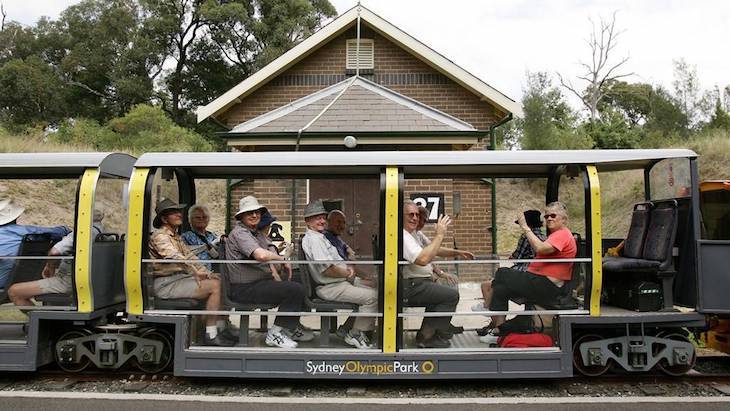 The Sydney Tramway Museum in southern Sydney has a whole day’s worth of activities, including regular tram rides on the museum’s own tram line from the old Railway Square waiting shed! A round trip takes about 15 minutes and there are 2 or 3 different trams being used. The historic waiting shed, which stood in the middle of Railway Square (near Sydney’s Central Station) from 1907 to 1973, has been painstakingly re-erected at the Museum.

Aside from the tram rides, the museum has a number of trams on display in the Display Hall, many of which can be entered, including the prison tram. There is also a large display of photographs of Sydney tramway scenes and some small items on display.  There is a small kiosk (light refreshments) and souvenir shop, plus a picnic area with electric barbeque facilities. A day ticket covers entry to the museum and unlimited tram rides for the day. 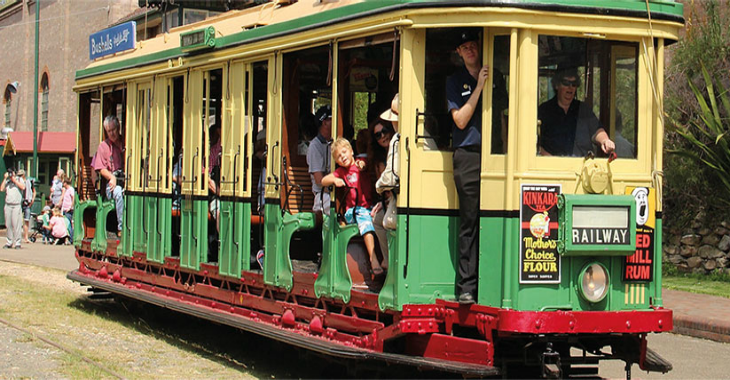 Transport Heritage NSW is the tours and events operating arm of the NSW Rail Transport Museum, established for the purpose of collecting, preserving and presenting the railway heritage of NSW for the benefit of the community. They’ve taken active exhibits from their collection on tour, thrilling and entertaining guests with experiences from the Golden Age of Train Travel. 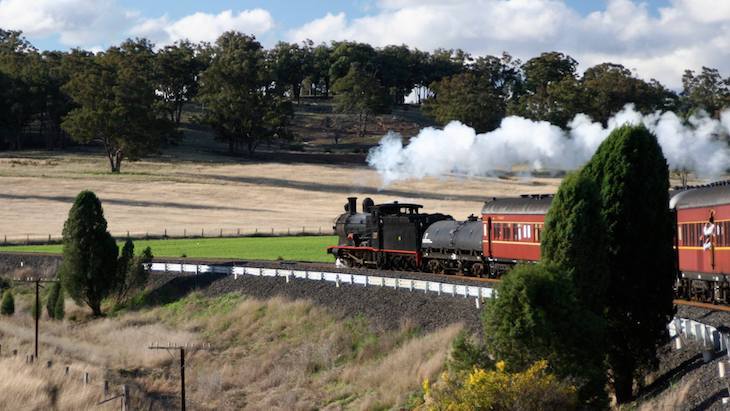 Take a day trip on a restored heritage train that operates from Sydney through to Robertson and Moss Vale via Wollongong on select Thursdays and Sundays with The Cockatoo Run. The journey offers spectacular coastal scenery prior to the ascent of the Illawarra Escarpment. The line climbs 600 metres through rainforests, past waterfalls and the spectacular viaduct. The train makes a stop at Summit Tank to admire the view over Lake Illawarra out to the Tasman Sea.

The train is hauled by one a Heritage Diesel Locomotive and consists of fully restored 1930s and 1940s built carriages complete with its original open air windows, and a buffet car offers light refreshments and souvenirs. 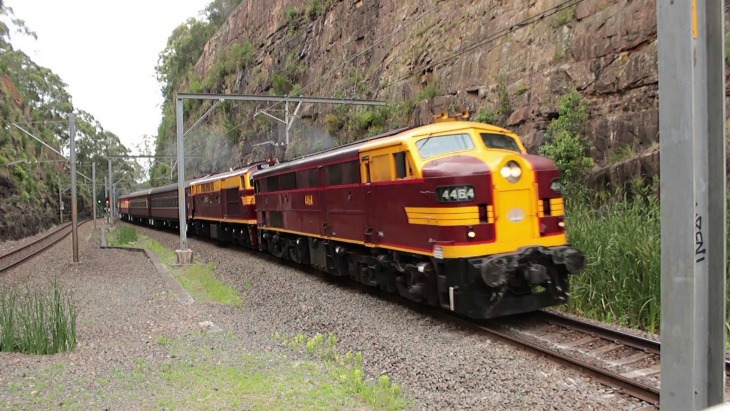 Less than a 2hr drive south of Sydney in Albion Hill, The Illawarra Light Railway Museum is train central. Home to a historic collection of locomotives, passenger cars, rolling stock and a miniature railway, this place is a paradise for train fanatics. Entry into the grounds with its picnic areas, wood fired BBQs and children’s play areas is free. Family Tickets which include unlimited rides on the Mainline, Bay Road & Miniature Train (2 Adults & 3 Children) $70.00. Single tickets available. 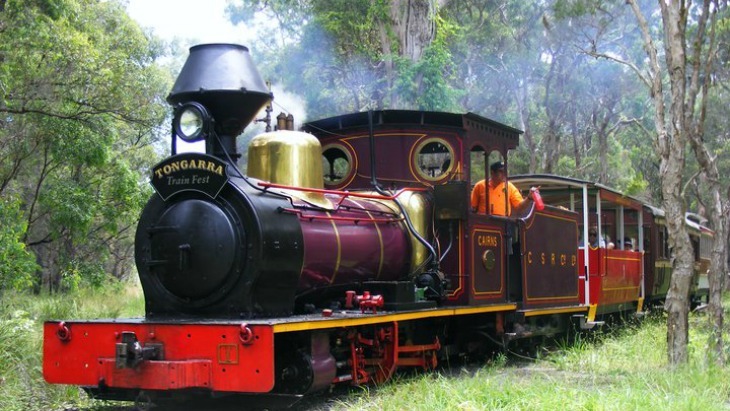 Toys and trains…name a child who’s not going to like this place! Situated in the beautiful Blue Mountains village of Leura, the Leuralla Toy & Railway Museum is based in a historic early 20th Century mansion. It houses a world-famous collection of toys and model trains. A European-style model railway weaves through a landscaped mountain set complete with viaducts, tunnels, bridges, chairlifts and a model of The Matterhorn mountain. The 5 hectares of award-winning manicured gardens are not to be missed either. 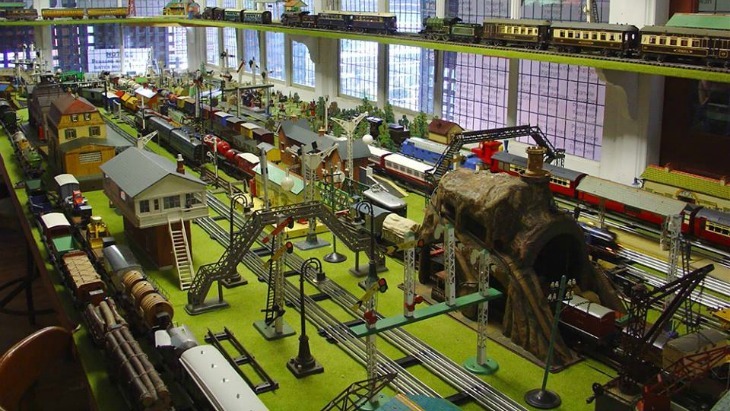 For a super easy way to please your train crazy kids, you don’t have to spend a lot or travel too far for a fun day out for the whole family. On Sundays, for just $2.50 per person, your family can spend a whole day on the trains, zipping around anywhere in Greater Sydney from Bathurst to Bomaderry and everywhere in between (see website for details). Unlimited travel is also included on buses, ferries and light rail.

Board The Real Deal

And if this wasn’t enough train destination inspiration, we’ve rounded up the best family friendly train rides you can take from Sydney and enjoy with the kids. Escape the city, board the train and journey in style to 6 of our favourite destinations.