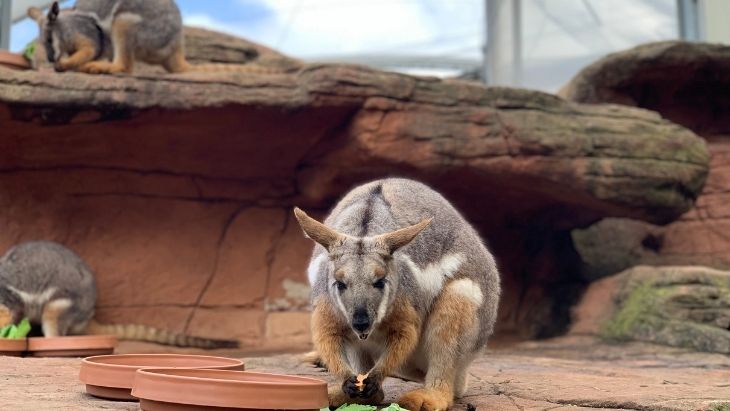 Armed with tickets to Merlin’s Darling Harbour attractions, my 16-month old daughter Olive and I, along with my mum’s group friend and her son, arrived in the city bright and early on a Thursday morning, primed for some Madame Tussauds Sydney and SEA LIFE Sydney Aquarium action—after successfully introducing the word ‘fish’ into little O’s vocabulary over the past week.

We returned two days later with Daddy in tow, gearing Olive up for some WILD LIFE Sydney Zoo fun. Following an acute animal obsession that’s been rife in our household for the past few weeks, Miss O ran in all guns blazing in search of “amines” (animals) and roaring at all and sundry (spoiler: there were no lions.)

Here’s what we made of our 2 days of Sydney sightseeing.

The wax figures are undeniably impressive, and for older kids —especially those with specific interests—it would make a great activity, as the journey through the Zones totally engages the senses. Being from the UK it was an enlightening trip down the glittering path of Aussie legends, there are so many sections—including Film & TV stars, sports heroes and an Australian history section.

The all-new music zone, Sydney Live, is set to be a sure-fire hit with kids too. They will absolutely love performing the best gig of their lives alongside Troye Sivan, then posing for their own album art, rocking out to the crowd and stepping into the spotlight as the headline act of Sydney Live.

Naturally, figures from outside our sunny shores make appearances too, including world leaders, the royal family (my favourite, of course), and some blockbuster characters from the Justice League and Marvel zones. Kids will love the interactive things to do, such as learning dance sequences, controlling fireworks over Sydney Harbour Bridge or taking photos on set with some of the TV stars.

As a parent, I loved seeing who I could recognise as well as learning more about each person through the information provided.

This is where the day really amped up. Being there on a Thursday meant it was really quiet and Miss O and her friend could really run free and explore for themselves. Because there are so many fish right there, and the kids are able to get so close up to them, it was super engaging and they loved pointing at the different water animals and screeching “fishies!” at the top of their little lungs (apologies to those trying to enjoy a quiet afternoon of shark spotting…).

For slightly older kids, the Discovery Rockpool would be an excellent way of getting hands-on with some of the sea creatures, while Miss O was quite content to give a cursory glance and runoff in pursuit of some bigger fish to fry…

Shark Valley and Dugong Island—the parallel underwater tunnels that house some of the world’s biggest aquarium sharks and Pig the dugong was a huge highlight for our two, and a lot of pointing and “wow” -ing ensued. The Penguin Expedition was another high point for Miss O and her friend (and the cooler temperatures very welcome—chasing after toddlers is no mean feat!), as well as the Sydney Harbour exhibit, thanks to lots of cool lights and sounds!

On Saturday morning we arrived at Darling Harbour again, coffees in hand and a rambunctious toddler bursting out of her pram in pursuit of some beloved animals.

We were lucky enough to be asked if we wanted to take part in the daily Wombat Encounter—due to COVID restrictions, only 2 (or 2.5, in our case) people are allowed in to meet Ringo the wombat each day, and it was a definite highlight of the experience. We were able to pat Ringo while he munched on his corn cobs and sweet potato, and it was great for Miss O to see the resident roo’s up close; the drawback of wildlife parks with such young ones is that they often don’t quite know what they’re looking at, so this was a real bonus.

After our encounter, we enjoyed journeying through the park, seeing snakes, lots of native Aussie animals including the adorable koalas and the brand new inhabitants of Kangaroo Walkabout. We felt very privileged to be amongst the first to meet the four sister Kangaroo Island Kangaroos who just arrived from interstate last month. The adorable sisters Julie (6), Nutmeg (4) and Kirby (3) already look right at home and put on quite the hoppy show for us. They sadly lost 6-year-old Tabby, recently, and while she'll be sorely missed, her sisters are hopping about in her honour.

We also marvelled as we came up close to Rocky the saltwater crocodile (the only animal where Miss O’s well-practised growl held much clout.) All in all, it was another great experience that I'm sure will become even more exciting as she gets older!

To make things even easier, you can take advantage of a special price when you book a Sydney Big Ticket multi-attraction pass. The pass is available from $40 for children and from $57 for adults – a huge saving of up to $37 per person! Make the most of your summer holiday, book now!