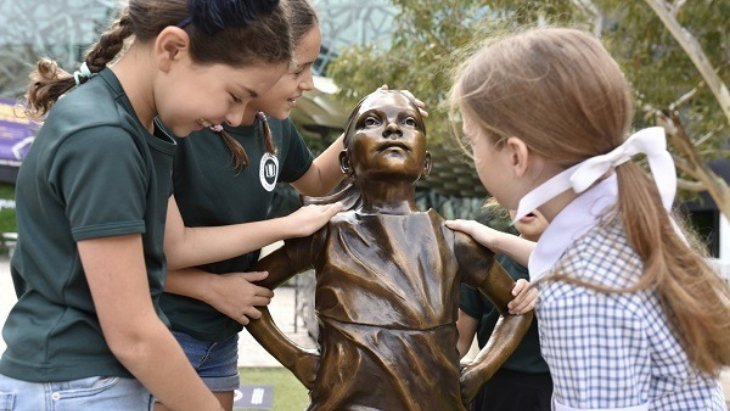 Just in time for International Women’s Day, an iteration of New York’s infamous ‘Fearless Girl’ statue has landed in Federation Square and will be calling Melbourne home for the next three years.

Intended to inspire conversations about gender equality, the work is a limited-edition reproduction of the famous sculpture by US artist Kristen Visbal, which was first installed directly facing off against Arturo Di Modica's Charging Bull in New York's Wall Street. The statue depicts a young girl looking boldly out into the distance with hands on hips and chin in the air. The work was first commissioned by investment company State Street Global Advisors and appeared on International Women's Day in 2017, and the statue has since become a symbol for female leadership and gender diversity in the workplace; making its Wall Street location particularly poignant. The only other cities to have hosted one of the statues are Oslo, Cape Town and of course, New York—meaning our girl is in good company.

One of just four in the world, the Aussie iteration of Fearless Girl was commissioned by law firm Maurice Blackburn, with its partners HESTA and Cbus Super, in order to raise public awareness of its fight for gender equality. The law firm is currently calling on the government to make five key reforms for safer workplaces in Australia as the Human Rights Commission conducts its inquiry into sexual harassment in workplaces.

Our Fearless Girl will be setting up camp in Fed Square for the next three years, in an effort to inspire conversations about gender rights and equality.