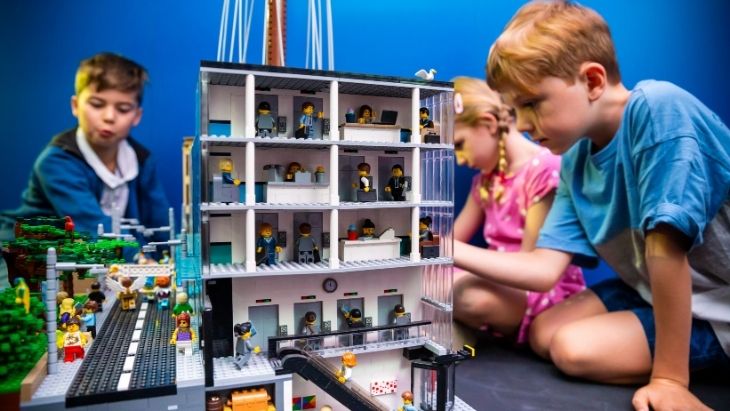 A jaw-dropping extravaganza created by ‘The Brickman’, Ryan McNaught, himself, LEGO® City has officially landed at one of the city's favourite landmarks—Sydney Tower Eye!

To celebrate the awe-inspiring exhibition as well as their own 40th anniversary, Sydney Tower Eye is offering guests the chance to experience the wow-factor of a LEGO® City, combined with the epic city views of Sydney’s best vantage point and a range of exclusive activities. Here’s what you need to know.

Boasting over 20 models created from more than 600,000 LEGO® bricks, the exhibition showcases the life and architecture of five of the world’s most iconic cities. We’re talking New York, Dubai, London, Tokyo and (drum roll)…Sydney!

Kids and adults alike will absolutely love learning about the city’s evolution over time, starting as early as 1000AD. The exhibition features eight never-before-seen-in-Sydney LEGO® skyscrapers, which everyone from the littlest to the largest LEGO® fans is sure to delight in witnessing.

Because the iconic exhibition is being hosted at Sydney Tower Eye in celebration of the landmark’s 40th anniversary, they’re offering the chance to engage in LEGO® City in a way that honours the incredible creativity of the exhibition, as well as the experience that Sydney Tower Eye provides.

After browsing the exhibition, guests are invited to the Observation Deck, where Sydney Tower Eye is hosting a range of exclusive events. These include meet and greets with Emmet Brickowski from The LEGO® Movie. a selection of exclusive LEGO® 4D Movies that you can’t see anywhere else in Sydney, plus a ‘Make & Take’ Experience, where visitors can choose their favourite LEGO® polybags. To take home, there is a tonne of free LEGO® worksheets and activities to complete from the top of the tower, or to save for later! And if you're feeling extra daring? Why not give SKYWALK, Sydney's highest outdoor adventure a go after the exhibition, too?

This must-see exhibition is on now until end of January 2022. The cost of a LEGO® + Observation Deck combo ticket is $49.50/adult and $40/child. Offering a super-memorable way to engage little LEGO® fans, book your tickets now!

More Things To Do