Magpie Season Is In Full Swing! Here❜s How to Survive The Swooping Attacks 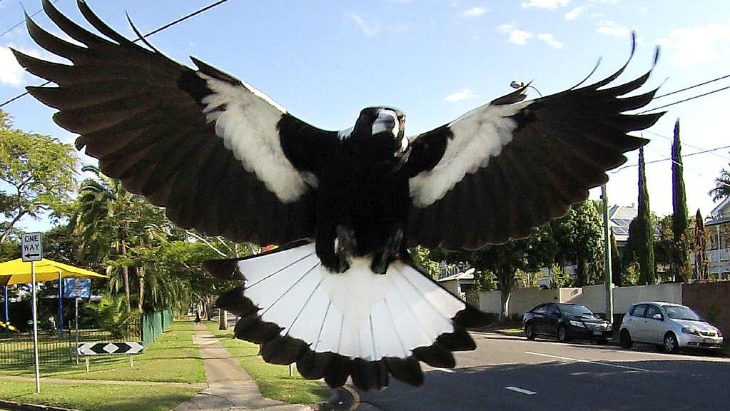 Stone the crows! Magpie Swooping Season is officially upon us!

According to the Magpie Alert interactive map, there have been at least 636 attacks and 56 injuries across Australia so far in 2020, with Queensland bearing most of the brunt, followed closely by NSW and ACT. Unwitting cyclists are the most highly targeted prey!

While they seem like angry, bloodthirsty birds terrorising locals, swooping only occurs when chicks are nesting, as protective parents ward off threatening humans. While we can empathise with their maternal character, they are also downright dangerous.

Last year, one particularly bad-ass magpie was such a problem it had to be put down. The infamous maggie was well-known in Bella Vista for its attacks on Old Windsor Road over the past three years, and allegedly it wasn't just swooping around trying to protect its nest.

The Hills Shire Council defended their decision to shoot dead the bird, saying they attempted to relocate the magpie multiple times, before agreeing with National Parks and Wildlife Service to get rid of it for good.

How To Survive Spring Swoopings

These black ’n white birds may seem pretty innocuous but come mating season (usually for 4 to 6 weeks at the start of Spring), they transform into ferocious swooping demons, hell-bent on attacking innocent pedestrians, cyclists, mums with prams, kids or anyone crossing their path. 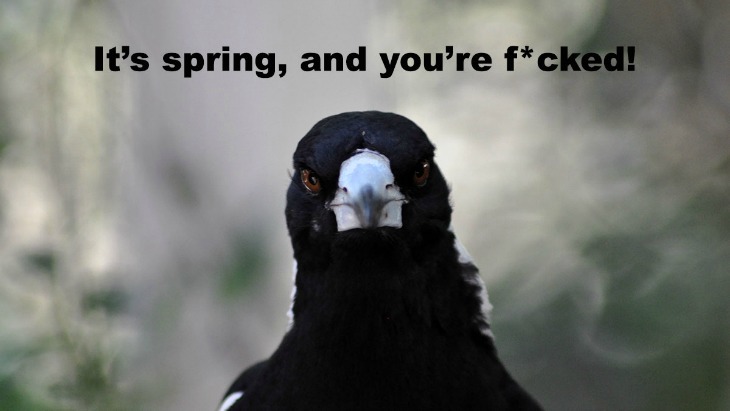 Here are some top tips to survive Magpie Swooping Season:

Did you Know - Most of the swoopers are male magpies defending their eggs and chicks, which are in the nest for about six to eight weeks between July and November.

1) Don’t fight back if a magpie swoops. Throwing things or shouting at a magpie are likely to make it more aggressive next time anyone else enters the territory around their nest.

2) Wear a hat (broad-brimmed is best) and sunglasses or take shelter under an umbrella.

3) Make a hat out of an ice cream container. If the magpie swoops, it hits the plastic and (hopefully) does less damage

4) You could also try drawing or sticking or sewing ‘eyes’ on the top or back of you hat.

5) Get to know where the local magpie nests are and avoid these routes during the breeding season.

6) Magpies usually swoop from behind so magpies will be less likely to swoop if they are watched constantly, or if people walk in a close group. So walk with friends.

7) Waving sticks or umbrellas in the air can help scare the magpie away.

8) Walk quickly but do not run. Put your folded arms above your head to protect your head and eye area.

Remember that magpies are protected in NSW and it is illegal to kill them, collect their eggs or harm their young.

If you feel a particular magpie is a serious menace, you can report it to your local council or the National Parks and Wildlife Service on 1300 072 757.