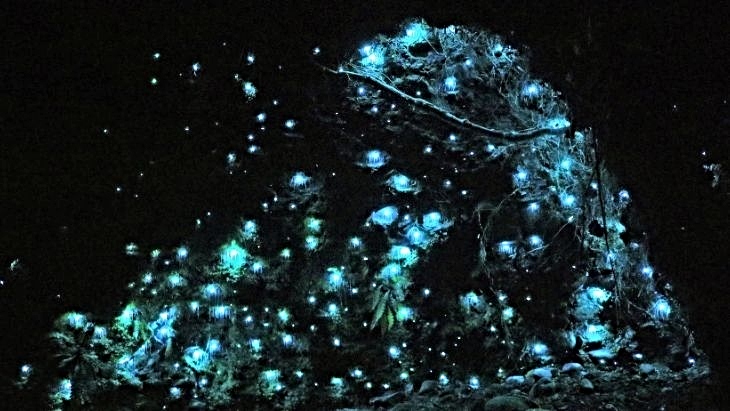 Although Australia is famed for its koalas, kangaroos, wallabies, wombats, echidnas and other, less-than-friendly species like crocodiles, snakes and spiders, there’s another, more obscure, creature vying for attention: the fungus gnat!

Despite the less than glamorous name, this little one shouldn’t be overlooked. The small, and rather rare, species is most commonly known as the glow worm - a much more radiant sounding moniker although they actually aren’t worms! - and it is an epic sight to behold, as multitudes of them illuminate dark caves in an incandescent spectacle.

There are a few special spots where you can witness this unique bio-luminescent phenomenon, so take a trip of discovery to one of these glow worm caves to visit near Sydney.

What Are Glow Worms?

According to Australian Geographic, these luminous locals known for their spectacular bioluminescence or ‘living light’ are the larvae of a primitive fly – the fungus gnat. A chemical reaction between an enzyme and pigment in the larvae’s body with the oxygen in the air causes them to emit a blue-green light – visible through the transparent skin in their abdomen. This light lures prey closer, tricking them into becoming entangled in the larvae’s silken threads.

They can be found in dense rainforests of Gondwanan origin and caves or rocky structures, thriving in permanently wet habitats. During the day they are inconspicuous, but in the darkness, these luminescent larvae sparkle, dotting caves, tunnels and walkways with blue-green light.

The gorgeous glowing larvae of Australia (and New Zealand) are extremely sensitive, and any change to their environment could be detrimental. When visiting glow worms caves remember:

You can, however, sit back and admire their astounding beauty!

Where To Find Glow Worm Caves Near Sydney

The walk into the tunnel follows a disused railway line that once descended into the Newnes Valley and now provides a gorgeous lead up to such a stunning spectacle.

Positioned underneath a densely populated glow worm overhang, a custom-built viewing platform allows you to climb up for a very personal experience with the glowy little things! Each tour has been carefully designed to create an unforgettable experience that is a highlight of a visit to the Blue Mountains.

Situated in the Bundanoon section of the Morton National Park, the beautiful Glow Worm Glen showcases some stunning glow worms - and the walk up to it is almost as beautiful. Locals recommend starting the walk at sunset so that it’s dark by the time you reach the glen. Then you can really enjoy the luminescent locals in all of their glory!