Sydneysiders love to make the most of summer days and balmy nights – and what better way to do it than to bring the best of the indoors, outside!

Outdoor movies are a quintessential summer activity, and there are loads of family-friendly events that the kids will love. Here’s our pick of the best kid-friendly outdoor cinemas in Sydney.

Strathfield Movies in the Park - Strathfield Park, Between Homebush and Chalmers Roads, Strathfield
Catch FREE outdoor movies in Strathfield Park on selected Saturday nights through summer. Make the most of the cinema experience and pack a picnic, bring a blanket or chairs and your friends and family to enjoy the great entertainment and kid-friendly film highlights.
Please note: Due to the Covid-19 pandemic, the 2020/21 Movies in the Park schedule has been cancelled.

American Express Openair Cinemas - Sydney University, Camperdown
Kicking off in January, this one is popular with inner-westies - and not just for its movies. You can also expect gourmet food, a fully stocked bar, DJs and live music, plus your furry friends are encouraged to join every night. Kids will love the line-up of family-friendly blockbusters including Addams Family and Frozen 2.
When: 2021 season to be confirmed. Outdoor Cinema at Sydney Olympic Park - Sydney Olympic Park
Previously known as Movies By The Boulevard, they have combined with the much loved Sydney Hills Outdoor Cinema to create a  new experience at Cathy Freeman Park, Sydney Olympic Park. This family movie event is on throughout school holidays with everything you need for a great night out including a bar, food and a kids play zone. General admission tickets are FREE and you can see the latest releases like Aladdin, Dumbo, Toy Story 4, Avengers: End Game, Jurassic World: Fallen Kingdom and BumbleBee plus lots more. There's also food trucks - Happy as Larry,  Smokin’ Grill & Pull n Shots as well as the licensed bar and candy bar plus the 4 unique seating areas including Couch Class and VIP tents which feature butler service!
When: 2021 season to be confirmed. 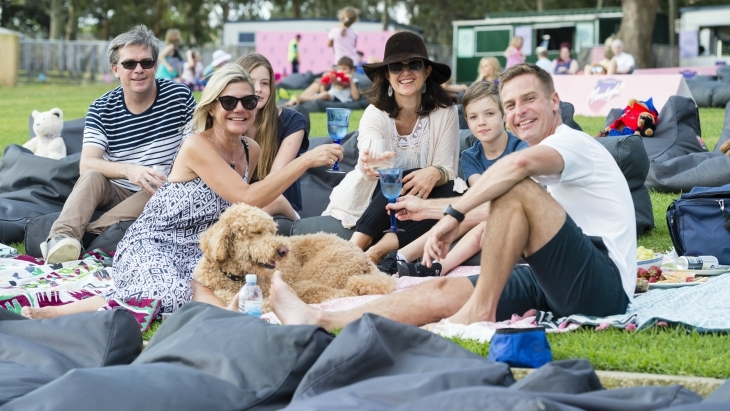 Moonlight Cinema – Belvedere Amphitheatre, Centennial Park
The original and still the best! Moonlight Cinema in beautiful Centennial Park is one of the most popular outdoor cinema experiences in Sydney. With films running every night excluding Mondays, it sells out fast and is almost always busy. Avoid the queues by booking online and bringing a picnic. This year's family flicks include new and recent releases like Frozen 2, Lion King, The Addams Family and Maleficent: Mistress of Evil and classics including Home Alone and Elf. Plus the smash-hit musical The Greatest Showman is back by popular demand! Don’t forget a blanket and some comfy cushions too, or get in early to grab some Bean Beds - they're $9.00 each and sell like hotcakes! Tickets for several family-friendly films are available at Family Pass Prices.
When: Season commencing November 2020 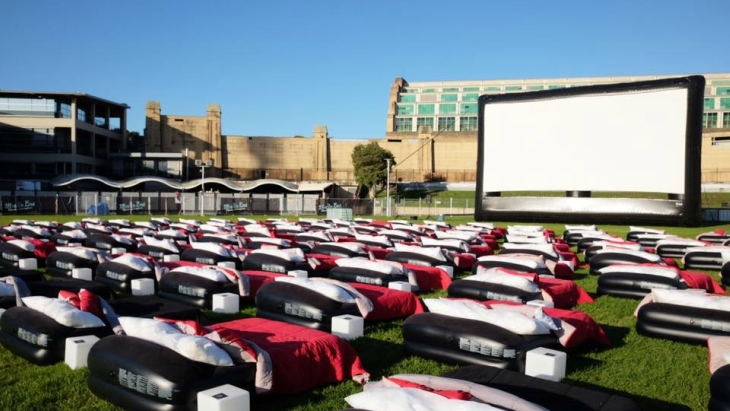 Mov'nBed – Entertainment Quarter Moore Park
If you find cinema chairs too stuffy and bean bags are just not for you, perhaps you need a bed to watch your movies. Mov’inBed cinema is the biggest outdoor bed cinema in the world and brings in a 150 queen size beds with LED-lit bedside tables, comfy pillows and even a blankie in case it gets chilly. The movies are all the latest and greatest and we love that you can get food from Burger Project and Fratelli Fresh brought directly to your bed. Oh, and we are so there for the bottomless popcorn! Bed Couple Admission is $73.80 ( admits two + $4.80 booking fee)
When: 2021 season to be confirmed (No screenings on Mondays) 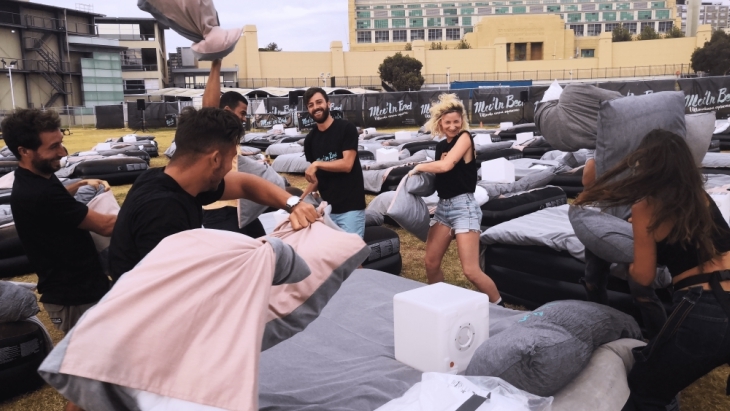 P.S. We really hope Mov’in Bed are also doing something special that will remind you of your childhood sleepovers - a massive pillow fight! They did this last year... so fingers crossed! American Express Openair Cinema - Dolphin Lawn, Bondi Beach
You can’t go past a cinema experience at Sydney’s most iconic beach. Sea air and the laid back vibe make this a summer must-do, and there's a film showing every night of the week. Bondi too out of the way? Check out American Express Openair Cinema at the University of Sydney instead. Get there early to secure some good seats, and so you can chill out over a picnic before the films light up the big screen after sunset.
When: 2021 season to be confirmed. 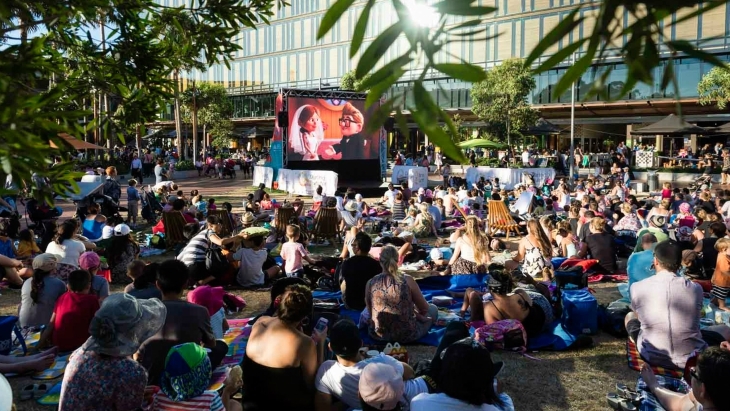 Christmas Movies In Darling Harbour - Darling Quarter Village Green
What better way to warm up for Christmas than with six nights of FREE festive films, including Elf, How The Grinch Stole Christmas and Miracle on 34th Street. Sit back on a picnic blanket on the Darling Quarter Village Green grass for the 6pm or 8.30pm film (or both!). Pack some snacks or grab something yummy to eat nearby (see below).
When: 2021 season to be confirmed

Night Owls Kids’ Film Festival - Darling Quarter Village Green
We love this FREE cinema under the stars! With live entertainment from local musicians, entertainers and artists each night, plus short films from Little Big Shots and family feature films including Mary Poppins Returns, Toy Story 4 and Aladdin, the kids will be thrilled. There's also after-hours films for the adults on dedicated nights, with a mix of fun films over the course of the festival. Also, check out our guide to eating at Darling Harbour with kids.
When: 2021 season to be confirmed Westpac Open Air Cinema - Mrs Maquaries Point
Possibly the city's most picturesque outdoor cinema, you may even have trouble watching the film for the views! All summer evening, this amazing harbourside venue transforms into a festival of film as the giant screen rises from Sydney Harbour! Expect an exciting mix of preview and premiere screenings as well as some recently released favourites including True History of the Kelly Gang. There is a fully licenced bar and decent food for purchase making for a pretty sophisticated night out (so you might want to leave the young kids at home). Tickets sell out so get yours early.
When: 2021 season to be confirmed

American Express Openair Cinema - Metcalfe Park, Pyrmont (next to Star Casino)
With a great mix of films for family night (or date night), head to Metcalfe Park and get comfy with an old or new favourite film. This year’s schedule is full of cult hits like 10 Things I Hate About You, Love Actually, Elf, Mean Girls and Clueless, plus the season's best family-friendly releases including Abominable, Maleficent: Mistress of Evil, The Addams Family and Frozen 2.
When: 2021 season to be confirmed 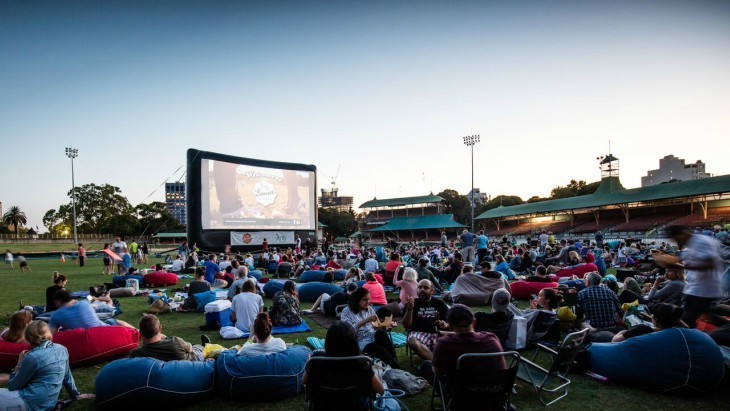 Sunset Cinema - North Sydney Oval, Cnr Miller and Ridge Streets, North Sydney
The hallowed turf of the North Sydney Oval outfield will see people of all ages and walks of life come together to experience movies in the great outdoors! The outfield is lush and green, but you might still want something more comfy to sit on. Make sure you look out for the FREE Junior Sunsetter activity packs. This means you can head to the North Sydney Oval early to soak up some rays while the kids are kept entertained, before settling down to watch one of the family-friendly films offer once the sun sets. Pack a picnic, or order off The Greens' epicurean onsite menu, which includes options for the kids, not to mention boutique wine, craft beer, and a little something for your sweet tooth.
When: 2021 season to be confirmed 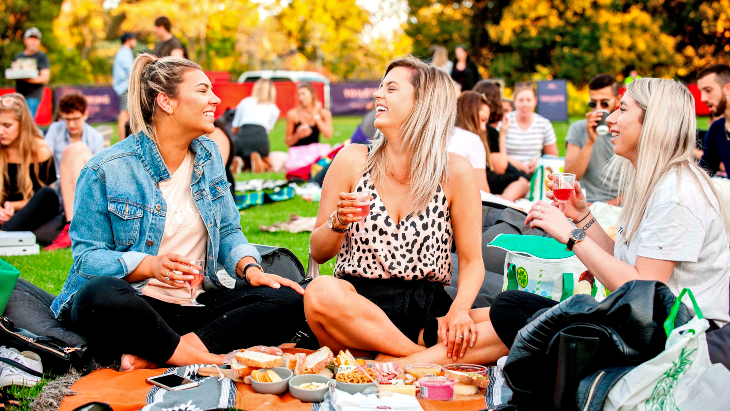 Moonlight Cinema - The Amphitheatre at Lizard Log, Western Sydney Parklands
The original Moonlight Cinema is bringing the quintessential summer experience to a brand new Western Sydney location for a limited season. The biggest blockbusters, new releases and cult classics will be showcased at the fabulous Lizard Log Amphitheatre for night after night of cinematic splendour and family-friendly entertainment, under the stars. The program is jam-packed with acclaimed films including family-friendly flicks like Frozen 2, Jumanji: The Next Level and Star Wars: The Rise of Skywalker. Prepare a picnic and your favourite treats or indulge in the on-site licensed bar and candy bar.
When: 2021 season to be confirmed Skyline Drive-In Cinema - Cricketers Arms Road, Blacktown
50 years on and Blacktown Drive-In has seen a revival, transforming into the Skyline Drive-In. Expect an old-school experience featuring the hottest new films, and ‘Happy Days’ style retro diner for a film experience like no other. There's typically one film screened each night - keep an eye on their website to catch something perfect for you and the kids.
When: Throughout the year.

Enjoy your evening out with the kids with our top tips for a fabulous outdoor cinema experience!