The Best Beaches in Brisbane 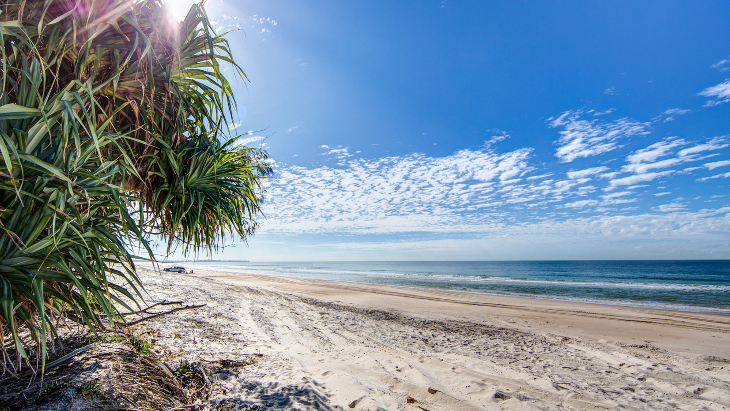 Nothing beats a day soaking up the sun and surf at one of Brisbane's best beaches. While you wouldn't call Brisbane City a coastal city per se - it's more of a river city due to the Brisbane River snaking its way through the middle - that doesn't mean there aren't loads of great beaches and bay inlets to savour those sweet summer rays. In fact, we've found eight incredible beaches in Brisbane to add to your weekend to-do list!

The Best Beaches in Brisbane

Located in the Moreton Bay Region, Suttons Beach is hands down one of the best beaches in Brisbane. Aside from the absolutely breathtaking waters, Suttons Beach is one of the most popular beaches in Brisbane due to the fact that it's a patrolled beach with small waves so it's fantastic for families with kids. There's also a playground nearby along the promenade - need we say more?

RELATED: Check out These Waterfalls Near Brisbane

Get ready to walk on water to get to this secluded Brisbane beach! While King Island at Wellington Beach isn't technically a beach, you will thank us for introducing you to this little gem when you're looking for a refreshing oasis away from the city come summer. Located on the Redlands Coast south-east of Brisbane, the magical sand bridge appears at low tide and connects Wellington Point to King Island and is a spectacular excursion the whole family will love. The King Island walk is roughly two kilometres return.

You can't have a list of the best beaches in Brisbane and not include the iconic Streets Beach in Southbank. Yes, Streets Beach is a man-made beach and yes, it's fabulous, in fact, it's Australia's only man-made inner-city beach - cool! Streets Beach draws in the crowds with its gigantic blue lagoon and beautiful white sand, making it the perfect spot to while away a lazy afternoon.

If the kids are keen to visit a Brisbane beach but aren't so keen on the waves, the Wynnum Wading Pool at Wynnum Foreshore is the go. Kids love splashing about in the refreshing waters of the Wynnum Wading Pool, which is actually a Heritage-Listed tidal pool that was built all the way back in the 1930s. The Wynnum Foreshore is also a great spot for a family walk, bike ride, or snack stop at the Manly Harbour Village further along the Esplanade.

Sylvan Beach is one of the most family-friendly Bribie Island Beaches due to the calm waters, and toilet and barbecue facilities. Red Beach is a top pick if you're bringing the pooches with you as it's one of the only pet-friendly beaches on Bribie Island. For those keen for a spot of fishing, head to Skirmish Point, and for the closest patrolled beach to the mainland, Woorim Beach has lifeguards, picnic areas, barbecues, and even a playground.

Nudgee Beach is the closest beach to the Brisbane CBD and offers calm waters, two playgrounds, sightseeing, and even mangroves so you can completely envelop yourself in nature. Nudgee Beach is located in Nudgee and borders the Boondall Wetlands but also has its own Nudgee Wetlands Bird Hide. Families love popping over to Nudgee Beach to play on the sand at low tide or go for an adventure along the mangrove boardwalk.

Located around 30 minutes north of the CBD, Lower Moora Park is most frequented because of the Lower Moora Park Playground but did you know there's also one of the best beaches in Brisbane there too? The enchanting bay at Lower Moora Park offers calm, shallow waters for little ones, but it does get super busy on the weekends - get there early!

Raby Bay Foreshore Park is another one of the best beaches in Brisbane, offering calm waters, a playground, walking and biking tracks, parking, and even some waterfront dining nearby. There are three bayside swimming spots to enjoy a splash at Raby Bay Foreshore Park and all three offer oh-so refreshing waters, clean sand for sandcastle building, and even kayak and stand-up-paddleboard hire right by the bay - so good!