Ain’t Nobody Jumping For Joy With These Trampoline Results Recently, independent, non-biased agency Choice, tested 8 of the most popular trampolines on the market. And the results are frightening.

Trampolines have shared a love/hate relationship with parents for years now. On one hand, they can help in the development of a child’s co-ordination, balance and motor skills. On the other, they can be incredibly dangerous.

Did you know that, despite efforts in recent years, according to ABC news, serious injuries trampolines have actually increased? The report suggested that the development of nets have created an unfortunate complacency amongst parents who mistake them to be safe and secure. In fact, 3000 trampoline related injuries are reported every year (think about all the non reported ones too!). They are the second biggest cause of hospital-treated injuries on play equipment with children aged five to nine are the most frequently injured, though there's also an alarming number of injuries to children aged under five. According to Choice most injuries happen when children fall off or hit the side of the trampoline, but there are also risks for young children who can wander underneath and get hit when another child bounces above.

So, Choice decided to out the most popular 8 models to the test.

Choice writes, “We put trampolines through expert testing to find the models that are safe, durable and easy to use. Of the eight models tested, all but one had major safety failures". See the full report here.

Brands tested were (in order of results): 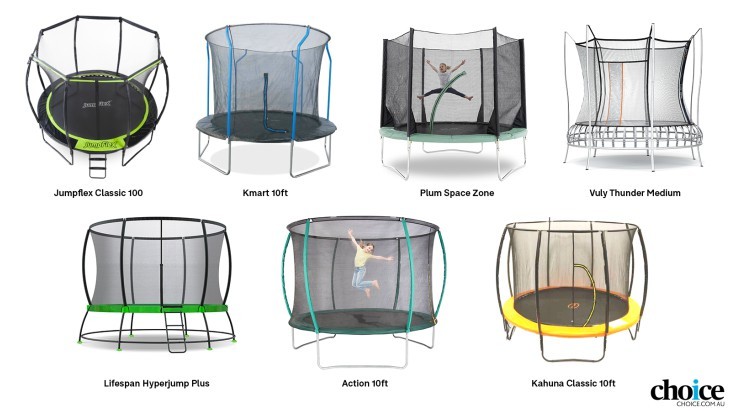 Of those tested, Springfree Trampoline Medium Round R79 was the only model to pass. So essentially, 7 out of 8 failed the test, that’s so frightening especially when outcome clearly doesn’t reflect the monetary outlay.

If these numbers aren’t alarming enough for you, imagine our surprise to learn that the current Australian standard for trampolines, AS 4989:2015, is only voluntary. Choice (and ellaslist) believes trampoline manufacturers should follow the Australian safety standard to protect children from injuries.

Don’t despair, if you are still keen to buy your children a trampoline, then Choice have put together a great buyers guide outlining what to look out for, putting it together correctly and trampoline safety.

Please remember that all trampolines need regular inspection and maintenance, and children under six should always be supervised by an adult.