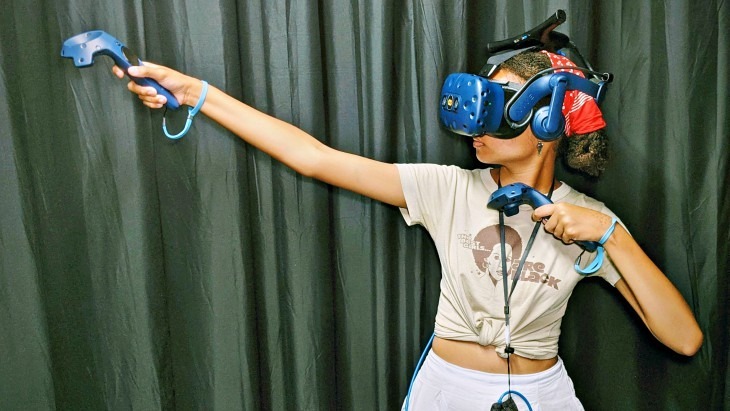 * Small meal deal includes a choice of a pie or a sausage roll and a drink.

Whether you're after adventure or sci-fi, you can escape reality in one of six VR escape rooms for up to an hour and a half of fun! Beyond Medusa's Gate (Set in Assassin's Creed Odyssey) will transport you to ancient Greece. Huxley II will take you on a journey to the centre of energy. You can also Escape from the Lost Pyramid of Nebka or to Huxley in 3007 AD to a world where humans are replaced by machines.

The Escape Room adventures are for 12 years above. Prices start from $49.00 and cater to 1 - 4 players and VR Kingdom has 2 dedicated VR escape room areas so you can run 2 games at the same time in 2 different rooms, enabling up to 8 players at the same time...

Get ready for a game of Safe Night or Shmooter for up to 6 friends.

Safe Night, the zombie shooting game,  is set in 2041. The world has been in ruins for several years after the nuclear war. Radiation has affected all living creatures, turning those who survived into irradiated and mutating monsters. Only some people have not been affected - including you! This game can take up to 4 players at a time and are for those aged 16 years and above and prices start from $49.00.

Try 3 different games in 30 minutes. Zombie shooting, Sci-Fi shooting and an Adventure game. Each game is 8-12 minutes each, depending on the game so the three of them will be around a 30 minute session.

VR Kingdom is located at G/F, 418 Gardeners Rd, Rosebery.  They are located about 4.9 KM from central station. There is free street parking nearby. The closest station is Mascot, which is only a 17 minute walk (1.3km). The other station is Greensquare, which is 24 minutes walk (1.9km)