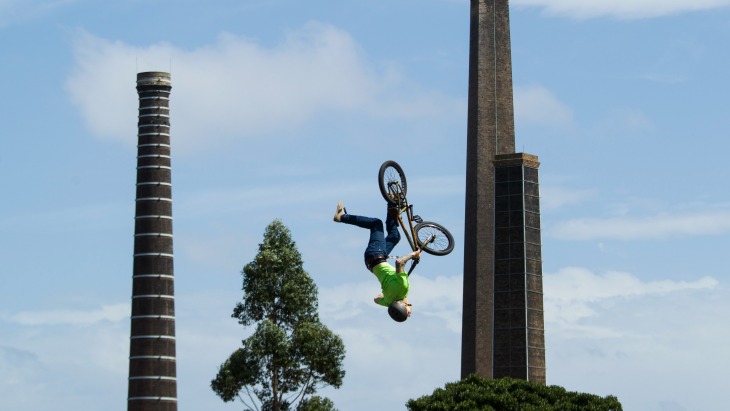 The City of Sydney’s annual four-week festival – Sydney Rides Festival is on again from 3 to 29 October – boasts more than 30 events that celebrate bikes and family fun in the outdoors.

Suit Ride and Try A Bike session: Join in for the official launch of the 2017 Sydney Rides Festival with a bike ride in business attire for city workers and the chance to take part in the try-a-bike event over lunch in The Domain.
Where:     The Domain, Mrs Macquarie's Road, Sydney
When:      4 October 2017; 12-1.30pm

Chocolate Rides and Foodie Rides: After a sell-out in 2016, the almost calorie-neutral Chocolate Ride will return this year with a bike tour of Sydney’s tastiest chocolatiers, gelato and confectioners. The Foodie Ride promises participants a glimpse of cheesemakers, smoke houses and delicatessens, led by expert guides along cycleways, shared paths and quiet backstreet routes. Bookings essential at sydneyridesfestival.net.
Where:    Marrickville & Alexandria
When:     14 & 21 October 2017

Spring Cycle: A once-a-year opportunity for beginners, regular riders and lycra lovers to cross the magnificent Sydney Harbour Bridge by bike and cruise across the Cahill Expressway and The Rocks historic area, with the routes all car-free for the day. The 10km Sydney City Ride ends with a family-focussed event in Pirrama Park at Pyrmont. Participants can also join the 16km River Ride, 50km Classic Ride or ride alongside Australian tour legend Robbie McEwen on the 105km Challenge Ride to Sydney Olympic Park. Departing from St Leonard’s Park from 6am. Pre-booking essential at springcycle.com.au.
Where:    Pirrama Park, Pyrmont
When:     15 October 2017;

Mechanics Challenge: Stop by Martin Place for lunch to cheer on the fastest mechanics in the land, with inner tube changing races, chain greasing sprints and a tyre pumping challenge.
Where:    Martin Place, Elizabeth Street, Sydney
When:     27 October 2017; from 12.30pm

Cycle Speed Dating: Forget swiping right, speed-dating by bike is the new way for singles to mingle! Already a success in London and Queenstown, Cycle Speed Dating gives Sydneysiders the chance to chat before a relaxed ride and matchmaking.
Where:    Starts in Surry Hills
When:     28 October 2017; from 5pm

Light the City: – 28 October Sydney’s two-wheeled twilight event returns to a traffic-free Mrs Macquarie’s Point for a Halloween-inspired community celebration. Friends and families can fancy dress to impress and enjoy spectacular harbour views, gourmet food trucks, epic illuminations and the popular silent disco as the sun goes down and trees light up. Bike hire is available on the night. Mrs Macquaries Road, the Domain, 6pm–11pm.
Where:     Mrs Macquarie's Rd, The Domain, Sydney
When:      28 October 2017; 6-11pm

Visit sydneyridesfestival.net for all the latest updates and full program guide.