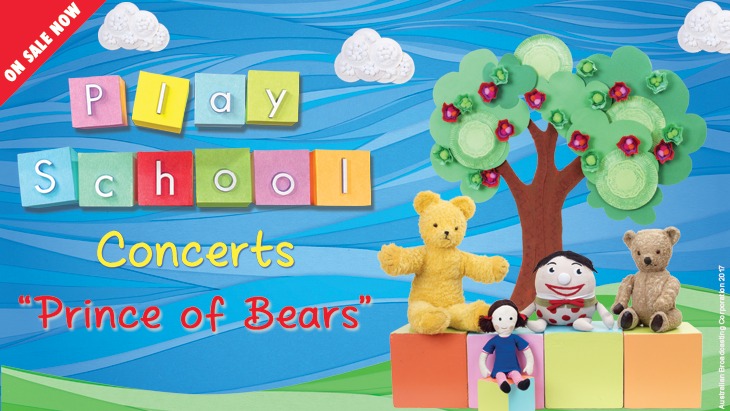 Don’t miss out on the chance to see your children’s favourite television show live in concert when the Play School Concerts come to town July to October 2017.

These popular Play School live shows are specially designed to delight pre-schoolers and parents alike. The concert features songs, games and stories, presented by two Play School presenters, along with the real stars of the show the toys

As with the television program, everything in the concerts is carefully paced especially for children. There are songs to move to, as well as quiet times to just watch and listen. The familiarity of the material and the presenters combined, totally engage the young audience and there is lots of audience participation.

The story for this years show is "Prince of Bears". Prince Big Ted has a royal crown, he has a royal cloak but doesn’t have a royal castle. He sets off to find one, and is joined by his friends Humpty, Jemima, Little Ted and the Play School toys as he travels through a fun filled world of nursery rhymes, songs and stories. Get ready to sing, dance and jump for joy, with a live show that will delight and captivate all Play School fans.