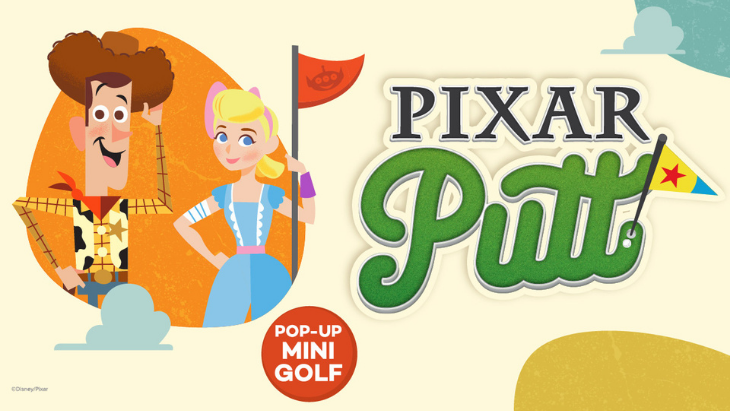 Following last year's successful debut season in Sydney, when the colourful mini-golf course took over Darling Harbour, Pixar Putt is back for the School Holidays in a new Parramatta location.

The immersive pop-up mini-golf experience is made up of interactive holes inspired by the stories, characters and icons from some of Pixar’s most beloved films including Finding Nemo, The Incredibles, Monsters, Inc., A Bug’s Life, Wall-E and Inside Out.

Pixar Putt will also see the debut of five brand-new holes, including Disney-Pixar’s latest hit, Onward which features ‘Guinevere’ the van; a new Toy Story 4 hole featuring Benson, the ventriloquist puppet henchman; completely redesigned holes inspired by Pixar favourites, Ratatouille and Coco; plus a hole inspired by the brand new movie Soul which is scheduled for a cinema release in December!

Pixar Putt will be operating under a full COVID Safe plan with only 4 golfers per hole and 18 holes spread over 800 square metres at the Bankwest Stadium Precinct. There is plenty of space for patrons to stay safe, have fun and kick some serious Putt!

There will also be extended putting hours for all ages on Thursday, Friday and Saturday nights, with Pixar Putt After Dark open until 10pm.

Pixar Putt is Sydney’s must-do school holiday attraction and is set to take guests to infinity… and beyond!

Tickets are on sale now and advance bookings are recommended.

Find out more and book tickets at pixarputt.com.au.