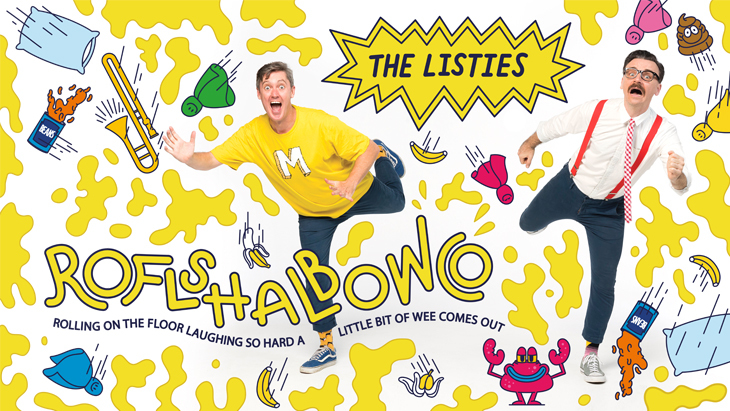 Monkey Baa Theatre Company kicks off the 2020 season with the hilarious, irreverent and hugely popular The Listies, from 10–25 January 2020 at ARA Darling Quarter Theatre. After a sell-out season last year, Matt and Rich are bringing their brand-new stage show R.O.F.L.S.H.A.L.B.O.W.C.O (Rolling On the Floor Laughing So Hard a Little Bit of Wee Comes Out) back to Darling Harbour to fight the post-Christmas blues!

The Listies walk the line between connecting with kid’s humour (including their love of the poo-jokes and the absurd) and cracking up the adults with cheeky contemporary socio-political asides. It’s genuine dual-appeal, win-win entertainment for the whole family. Critics have been bowled over by their balls-to-the-wall hilarious shows. Sydney Morning Herald proclaimed that “No-one else does comedy for kids this brilliantly, and what’s more the adults have just as much fun!” and The Age adding that, "If the Wiggles are the Eagles then the Listies are the Sex Pistols."

Gratuitous, ridiculous, hilarious, and possibly hazardous, Australia’s maestros of kids’ comedy return to Sydney this summer. Packed with insane, interactive, and irreverent escapades, this show will make you R.O.F.L.S.H.A.L.B.O.W.C.O (rolling on the floor laughing so hard a little bit of wee comes out). Bring a towel!