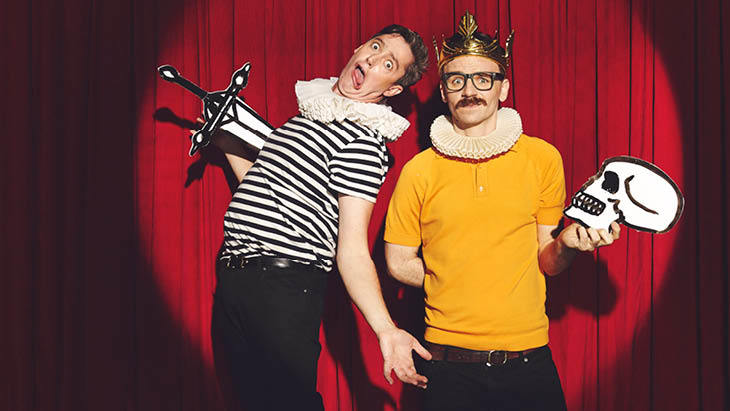 Sydney kids and families will be dazzled by The Tragedy of Hamlet: Prince of Skidmark, a family show at the Glen Street Theatre in Belrose this August 2018!  An hour-long comedy bomb with ninjas. And zombies.

The Listies, maestros of children’s entertainment, have pulled apart Shakespeare’s classic and glued it back together with hilarious costumes, turbo-charged silliness and plenty of interactivity.

Hamlet is full of thrilling things that kids love in a good story: ghosts, castles, sword fights, fake blood and spooky stuff. Enter super-sonic gags, expertly timed stage trickery and special effects unlike anything kids have seen before and you have a very cleverly disguised Shakespearean tragedy that'll have the kids howling with laughter.

And that’s not all… expect bonus pillow fights, pirates, ninjas, ninja pirates, aliens, ninja pirate aliens, zombies and a bunch of other hilarious stuff in this fun-filled hour of mayhem that mischief. The only thing we can be sure of is that everyone dies at the end – including the audience!

“One of the funniest introductions to Shakespeare imaginable.”
★★★★ Sunday Telegraph

"If you want your kids to have fun at the theatre and fall for all its magic, get them to a Listies show as soon as possible... Nobody else makes Shakespeare this fun."
★★★★ Daily Review

"this is Hamlet with everything you could have wanted and more, and it’s the perfect way to introduce a young person to the magic and chaos of theatre, as well as to the work of Shakespeare."
★★★★ Arts Hub