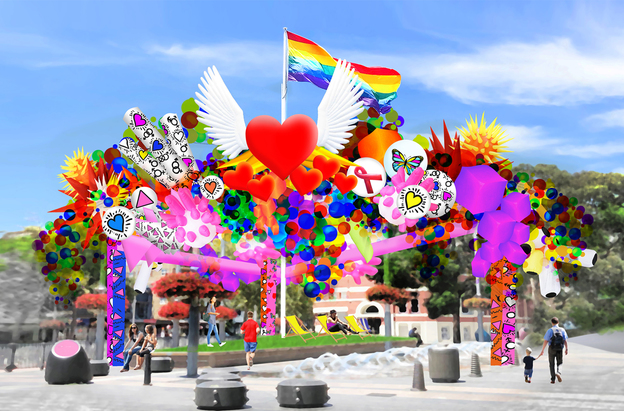 A new inflatable art installation will take pride of place at Taylor Square on June 24 2018 to mark four decades of the Sydney Gay and Lesbian Mardi Gras and cement the precinct’s place in its history.

40 Years of Love, which its creators describe as a “big, bold and sassy artwork based on concepts of public protest, joyous celebration, community activation and engagement”, was announced as the winner of the Taylor Square Public Art Project by Lord Mayor Clover Moore.

The project winner, launched by Sydney Gay and Lesbian Mardi Gras and proudly supported by the City of Sydney, is designed on a large triangular aluminium truss that rises above the existing grass island and water fountain to transform the space into a light-ﬁlled pavilion.

The installation, by artists Matthew Aberline and Maurice Goldberg from art studio Goldberg Aberline Studio (GAS), invites those passing by the historic Darlinghurst precinct to stop, stretch out on the grass to view its complex detailed work, and ponder the Mardi Gras story. Furthermore, to coincide with the anniversary, the City of Sydney just announced it will bring back the rainbow crossing as a permanent fixture to Taylor Square! Yipeeeeee!