Write A Letter To Your Child On Their First Birthday 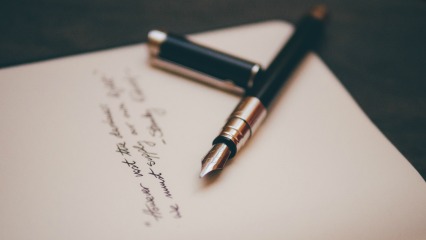 Check out this heartwarming video of 18-year old birthday girl Abby Van Metre opening letters that were written to her when she was 1- some of which were written by people who are now passed on. It’s definitely inspired us to do the same, and get relatives of our young children involved too!

Amongst the 25 letters in the time capsule, 7 were from deceased relatives including Abby’s grandfather, great-grandparents, uncle, and more. Her mother described it as “the most precious gift we could have ever given to her.” The sweet gesture was an idea that came to Abby’s parents in 1999, and asked guests of Abby’s 1st birthday party to write letters in lieu of presents. They didn’t read them at the time, saving them for their daughter, and so, as you can imagine, had one teary, joyful night when the capsule was opened. The video, shared by Abby’s mum on Facebook, has been viewed over 12 million times.

We find this so truly inspiring, proving that it really is the thought that counts. Put a moment like this in the works for your child and consider it as an idea for their next birthday party!