Would You Take A Family Gap Year To Have The Adventure Of A Lifetime?! 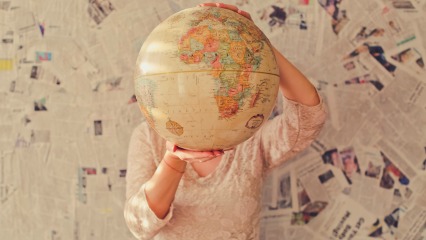 Meet the Argentinian Zapp family, who took a 16-year adventure of a lifetime…and had 3 kids along the way! This daring family has travelled through South and North America, Asia, Australia and Africa, finally coming to and end to let their children put down roots.


The Whole World Is A Classroom For The Zapp Children

An “antique 1928 Graham-Paige” has successfully transported this family around the world, and into over 2500 homes of strangers who became friends along their travels. It began in 2000 as a road trip for the parents, the then-childless Herman and Candelaria Zapp. The driving just kept on going, and the couple were  eventually met along the way by 3 children, all of whom were born in different countries and therefore have different nationalities, according to Petrolicious. Petrolicious asked about the children’s education at a meeting with the Zapp family in Budapest, which they have been getting for years through distance learning. Herman said: “Which school will bring you to dive at the Great Barrier Reef, then to see the Pyramids in Egypt, and go across the whole of Europe? Just look at our backyard today…" 
‘World-Schooling’ On The Rise

Think the Zapp family are a pretty unusual bunch? Well, they’re not the only ones taking this unconventional approach to family and schooling life. Taking extended trips and ‘world-schooling’, or learning on the road, is on the rise.

Why would a family choose this way of life? According to The Guardian, it is driven by a desire for parents to spend more time with their children, rid themselves of the stresses and pressures of jobs and modern-living, and learn about new cultures and experience a different lifestyle. The Guardian tells the story of the Robins family who are taking their 10 and 7 year old children on a 4-moth South-American adventure. “We want to take some time to step back from life, the treadmill of working hard to pay a mortgage, not having enough time for family or to follow our interests,” says Jo Robin.
Similarly, David Hurst told The Guardian: “To our minds, they are learning in a more interesting way. We don’t know if we’re right, but it’s our gut instinct. We don’t have a TV in the van and the boys only have one small box of toys each. We encourage them to spend as much time as possible outside." The Hurst family have taken a 3-month campervanning trip across 13 countries, during which their children will experience “education by astonishment”.

The Robins Family; The Guardian[/caption]

Courtney Adamo, British blogger and mother of an extremely stylish family shared her knowledge about home-schooling on the road with The Telegraph.  Adamo is a self-labelled ‘bohemian’, and the idea of taking a family gap year was a conversation she had with her husband many, many times before he agreed. She says that one of the biggest challenges for families like theirs is selling the idea to friends, family and the kid’s school, but to persevere, because “you only live once.” Although Adamo is not an “education expert”, here are her home-schooling tips, courtesy of The Telegraph: Would you take a family gap year? We want to know! Comment below.