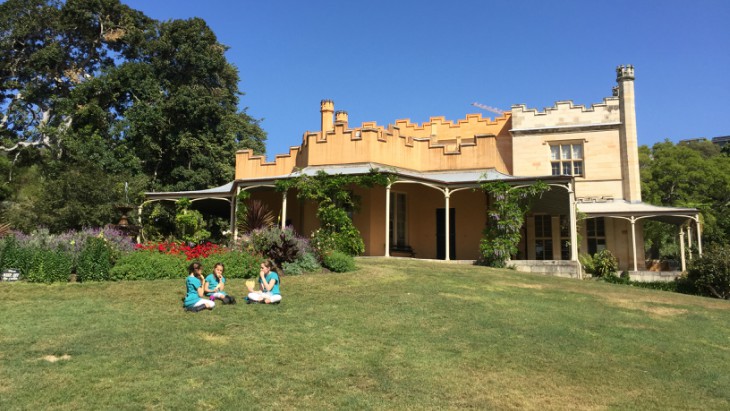 As we drove up to the property we could tell we were going to visit somewhere special. There were tall old trees lining the driveway and we could see lots of little bridges leading to what seemed like secret colourful gardens. Yes, Spring really is the best season to visit Vaucluse House. Kids In The Kitchen

The children were given a brief history of the house to introduce the Wentworth family. We were then led to the original kitchen area where we washed our hands in the traditional manner using soap and a towel in an old basin before being seated at an old wooden table. Here we were told how we were going to make Milk Pudding (also known as Junket) and an Iced Tea but needed to collect some ingredients from the garden to create our meal. 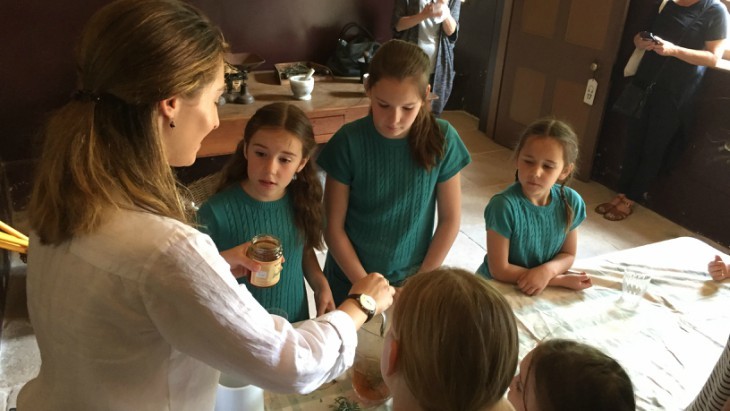 We were led out through the house and down to pick some lavender in the main garden, then we head to the ‘Kitchen Garden’. This garden was beautiful- full of fresh vegetables and edible flowers. I overheard one of the parents perfectly describe it: like we were in a Beatrix Potter book following Peter Rabbit through Mr McGreggor's Garden. We also needed to collect honey but obviously, couldn’t do that ourselves but my girls were still fascinated by the 4 giant bee hives containing 30,000 bees in each. We were able to taste some of the honey which had been collected earlier and it certainly was yummy, needless to say after that my girls were constantly reminding me to buy some in the gift shop before going home, which of course I did. 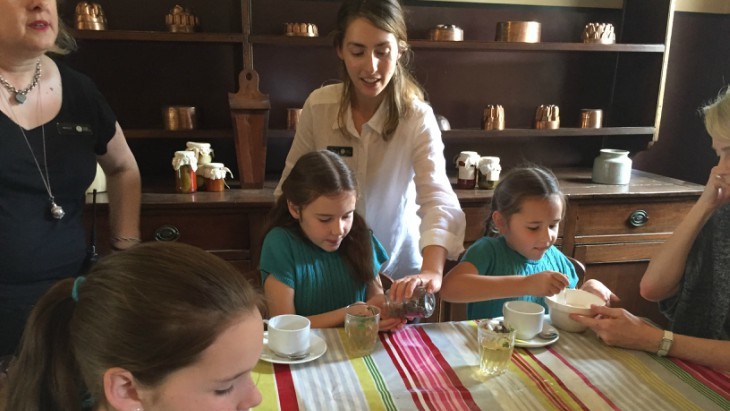 We headed back to the kitchen where all the children excitedly pulled apart mint leaves and lavender to add into the iced tea mixture, as well as the ‘Wentworth honey’ of course. They added sugar, lavender and choc chips to their puddings to make them a little more enticing to the children but as I had forseen, many weren’t fans of their own cooking! The girls claim making the food was their favourite part of visiting Vaucluse House. 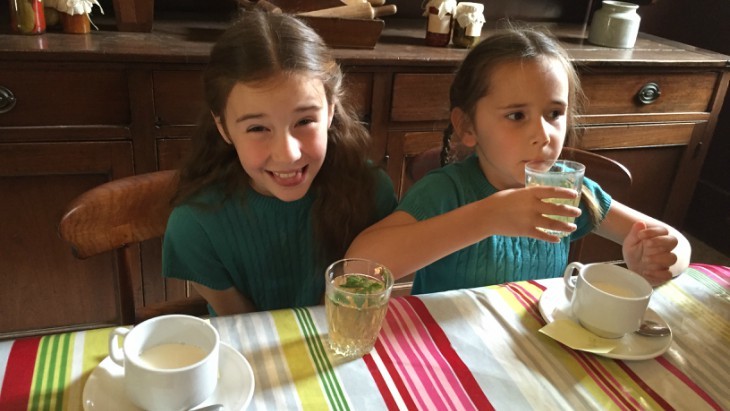 This tour was a smaller group and aimed to give the children a more hands-on approach to the history of the house. The children were able to collect the eggs, feed the animals, carry the water bucket after collecting it from the well, gather the sticks for the fire and take it to the various parts of the house where they learned what jobs the servants needed to do. 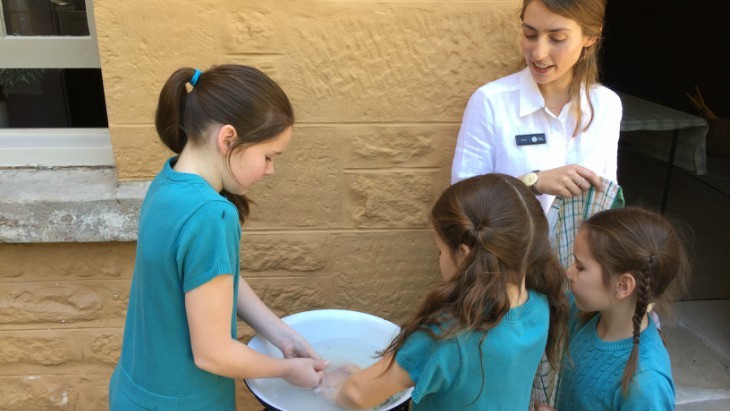 My 11-year-old was shocked when she learned about the scullery maids tough duties, as those servants were usually only a year older than her. In the kitchen the children took turns at folding the washing, grinding the spices, chopping the lavender, weighing the cooking ingredients and sweeping the floor. 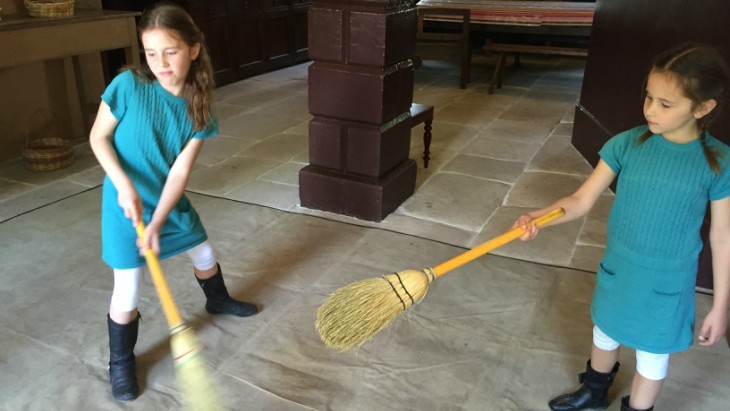 We learned where the small accommodation was for the male and the female servants and how close it was to the smelly stables. 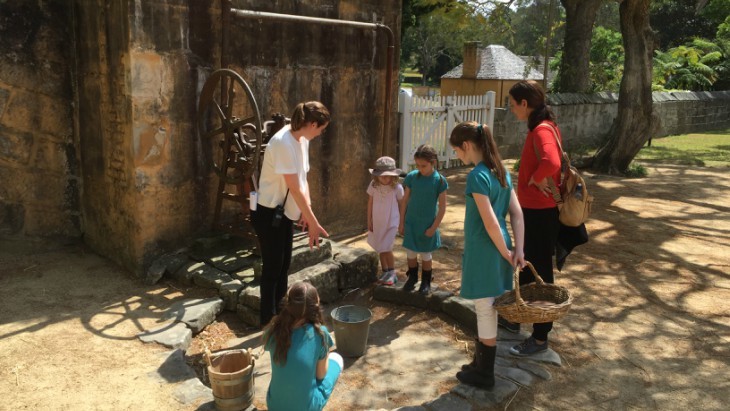 We would highly recommend this tour for families as it is short and kept the attention of all the children but also gave the adults interesting facts about how the house was run. These family-friendly tours run during the school holidays. 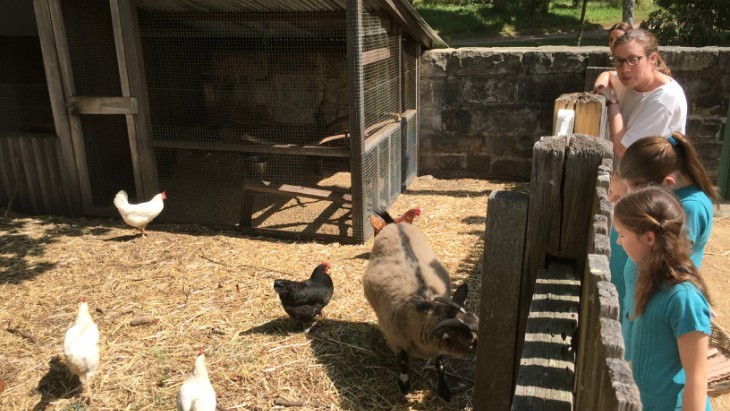 There is a recorded tour where you can guide yourself around (1-hour+) or there is a guided tour (45-minutes). Our guide was nice enough to take us on a modified tour which was separate to the actual ‘Wentworth Tour’ as she did say the information is very detailed and bores most children under 10-years-old because you don’t move as quickly through the house. However in saying that, I think she was very surprised by how much all my girls wanted to learn more. The more information she gave them, the more questions they thought to ask, at one stage even my 8-year-old wanted to know more about the paintings, especially who was in them. The bedrooms were a favourite because of the furniture and the traditional games, but for my 6-year-old, it was the high short beds. This modified tour was perfect for us and encouraged my children to talk about all they’d learned on the way home and even research it more the week that followed. On arrival, we weren’t sure where we should head to first so we went to the Tearooms and the staff there were extremely friendly and helpful. We did leave there though to find our first tour meeting point but promised to return there before leaving the House- and believe me, they didn’t disappoint! The lady who had helped us earlier had a really lovely conversation with us, asking the girls what they had learned and what their favourite parts were. We ordered 2 serves of the scones which arrived warm on old china plates. They were soft, had a light crusty shell, included jam and cream and I can honestly say these scones were the very best I have ever tasted!! 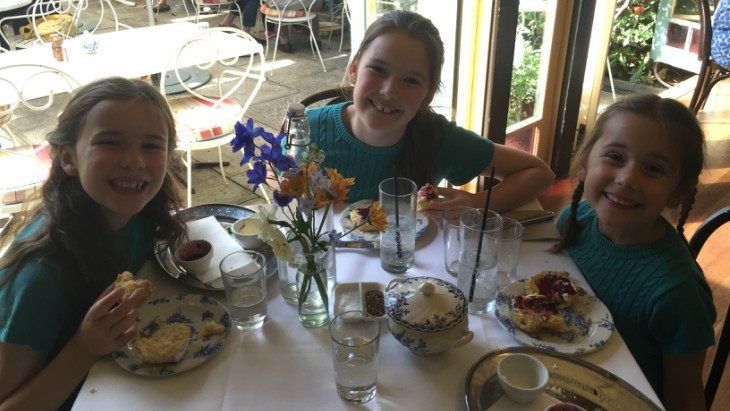 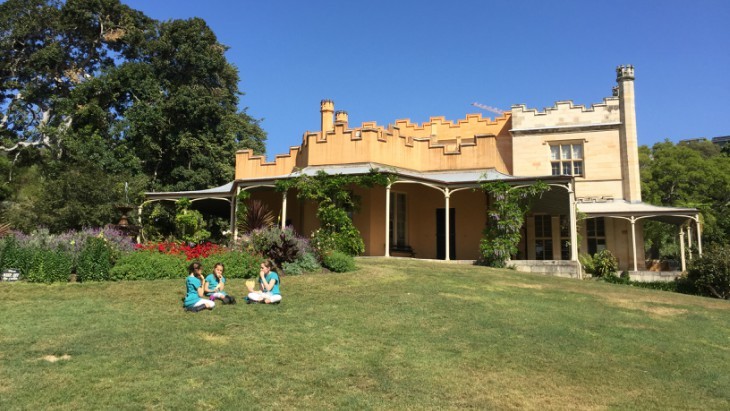 You can find Vaucluse House at 69A Wentworth Rd, Vaucluse. For more information and to book in for the 'Kids in the Kitchen' workshops, visit their website.