We Do Some Glorious Time At Old Melbourne Gaol 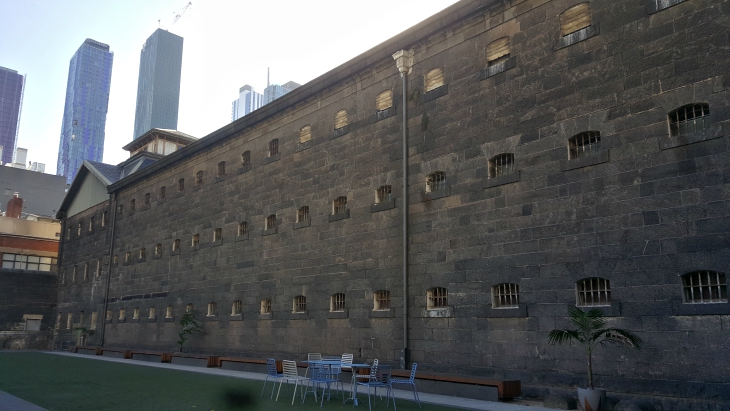 If you are anything like me and have curious kids who like gruesome tales of prisoners, fights, hangings and escapes – and plenty of scary role-play action, then Old Melbourne Gaol is for you!

After purchasing our tickets at the entrance to the museum, we headed out back along Russell Street and joined a large huddle of people gathering together for the Old City watch House Tour.

As soon as we heard the key turning in the lock and the door opened to reveal the imposing figure of a stern looking duty officer, hands clasped behind his back and feet planted firmly on the floor, we knew we were in for a treat. 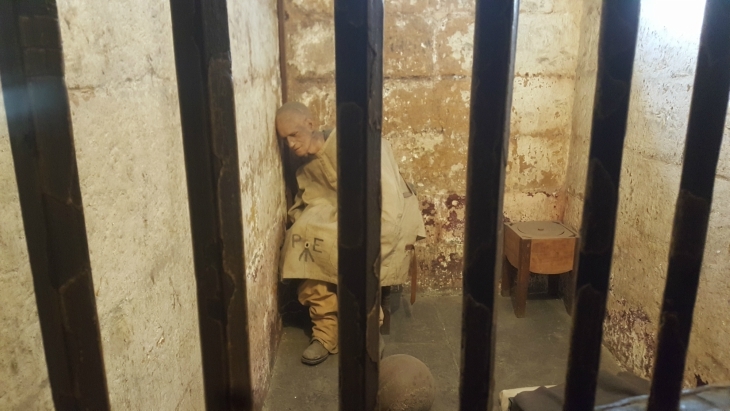 “Right you horrible bunch of criminals,” he snarled at us. (Mr 4 year old gripped my hand a little tighter than usual at this point.) “Welcome to your new home until the courts decide what to do with you, you miscreants, you scum of society, you lowest of the low. Follow me! Women to the left, men to the right.”

We shuffled in and lined up shoulder to shoulder, our backs pressed against the damp brick walls, while the duty officer paraded up and down in front of us. “No talking. No coughing. No laughing. No spitting. No burping. And absolutely no farting!” (This last instruction, of course, caused an explosion of stifled laughter from the older children amongst us.) We were led up to the station desk and handed cards detailing the profiles of criminals we had to ‘act’ during processing – car thieves, robbers, people causing public disturbance, drug dealers, drunks, all based on real people – before being led along another corridor where we had to place our belongings on the floor and stand with our arms outstretched, backs against the wall, ready for inspection.

The intimidating officer paraded up and down in front of us, issuing commands while peppering his commentary with the history of the watch house and the Old Melbourne Gaol. Orders understood, we were marched to the main cell block where we were divided into smaller groups and locked into dark, damp cells – empty apart from the original hard narrow benches lining the walls and an exposed stainless-steel toilet in one corner. 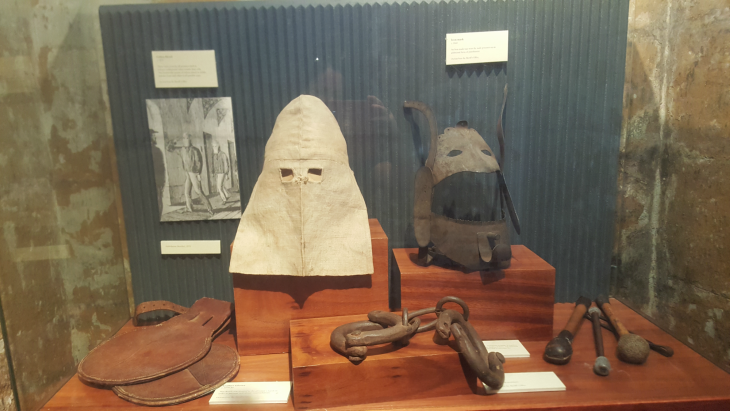 About fifteen of us were crammed into the cell, in which four or five prisoners would have spent the night before being sentenced in the neighbouring supreme court (the very place where Ned Kelly was sentenced to death by Judge Redmond Barry) and the conditions would have been very cramped. The cells were grim – cold, dark, damp and mildewy, just as they would have been in 1994 when they were last used. At the sound of the key turning in the look, my little boy asked to be picked up.

The smallest of windows gave us minimal light until our fellow prisoners started switching on their phones eradicating the darkness. But even in those briefest of dark moments it was enough opportunity for all of us there to realise that this was not the kind of place anyone would choose to be in, especially, as one of the young girls pointed out, if you had to use the toilet in front of everyone!

We then moved to the men’s exercise yard – a small concrete enclosure emitting the meanest strips of light through metal ceiling grills. Again, there was a single toilet in the corner with a small wall on one side to preserve any remaining modesty, and a row of three equally exposed shower heads attached to the wall – this seemed to greatly bother the children on the tour, more then the thought of incarceration and possible hanging. 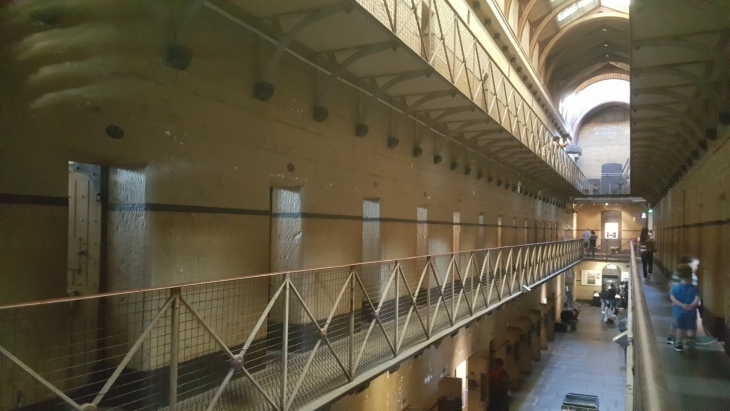 At the end of the tour we took mugshots holding a board with a prisoner number on (free of charge) and then professional photos in a mocked-up cell (available for purchase at the exit) and then walked through the court yard towards the main building.

If you thought that the kids would have had their fill of gory details by this stage – the wet cell for vomiting drunks, the padded cells for those likely to do themselves harm, the messages carved by prisoners in the walls – you would be mistaken. Ours wanted more and there was plenty more to come!

Continuing with a self-guided tour, we walked past the site of the gallows where some of the 133 executions were carried out from 1851, before relocating inside where they remained until the gaol closed in 1924. The information map was an excellent resource in addition to the signage around the buildings and we discovered that as recently as 2004 the body of an executed man was found beside an old wall. 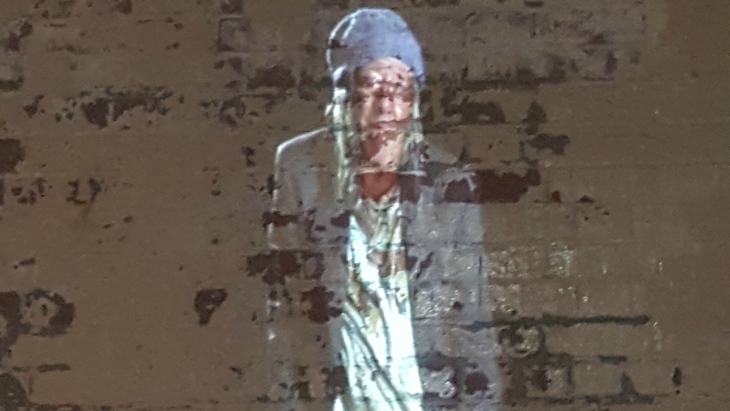 A big hit with the active imaginations of the kids was the drain to the cess pit – in the cells the prisoners used buckets for toilets. These were emptied daily into the drain and the smell must have been unbearable in the hot Melbourne summers.

Within the gaol there was also a hospital, which had a room for storing the bodies of the executed prisoners, many of who had ‘death masks’ – plaster casts of their heads for research purposes – made, including the infamous Ned Kelly, and we saw some of these on display.

In the main part of the gaol lots of cells had been set up with models of former prisoners and information about them, and the kids enjoyed answering questions in the newly produced ‘Escape the Gaol’ booklet, which we had picked up at the entrance. 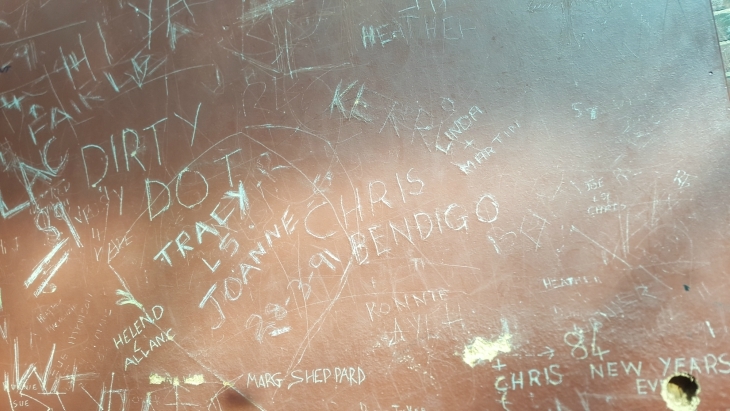 All in all, we had an excellent day out at Old Melbourne Gaol, and spent considerably longer there than expected because the interactive tour was informative, exciting and engaging. The tour brought the sense of the museum alive and we would highly recommend it, and although the kids were frightened at times, all in all they loved it!