The Grounds Of Alexandria Easter Egg Hunt Descends Into Mayhem 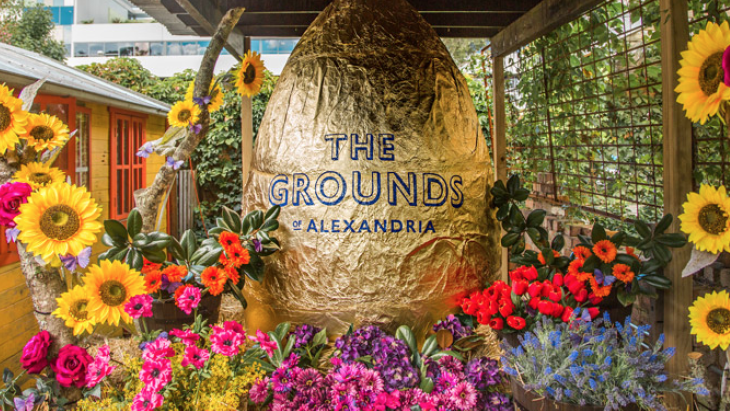 I don't know whether to file this under 'first-world problems' or 'this is why we can't have nice things'. You know what, it's probably a bit of both and to me it sums up what living in Sydney is all about. Pure madness wrapped up in shiny foil packaging. It all started with an innocent little (free) chocolate egg hunt on the day before Easter at the Grounds of Alexandria, but somehow it ended in tears, bruises and a hell of a lot of damage control from the popular Sydney cafe.

You see, the chocolate egg hunt, which was meant to be a little bit of a fun for the kids, quickly descended into chaos when the organisers failed to pre-empt the amount of people who would show up. Lines went out the door and down the street, kids waited for over an hour just to get in, and of course, when they did, there were no chocolate eggs left - somehow 40,000 eggs disappered within 15 minutes! To make matters worse, the kids who did get in first were leaving with buckets full of eggs, parading them past the kids in line, rubbing more salt into the weeping wounds than Augustus Gloop leaving Willy Wonka's and heading straight to a Weight Watchers camp.

What should have been a colourful, Instagram-worthy celebration of Easter quickly became a scene of mayhem and despair, which I can only compare to the sinking of the Titanic for men with steerage class tickets.

Here are some of the reviews left on the Grounds of Alexandria's Facebook page after the event: 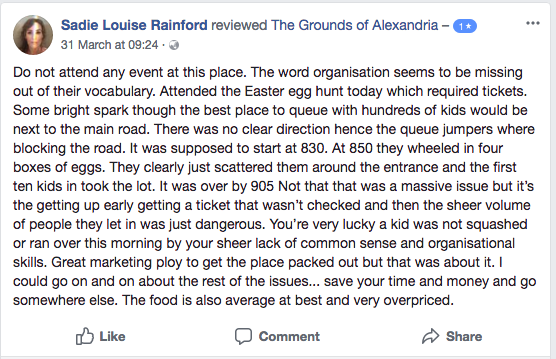 Naturally the Grounds went into crisis mode and quickly wrote an apology on their Facebook page:

"An Easter egg hunt without any Easter eggs. Kinda like Christmas without presents, Halloween without treats (or tricks) or peas without carrots," the statement read.

"A lot of people left angry and disappointed, and most importantly kids left without chocolate. To those we disappointed, we apologise from the bottom of our hearts and would love if you reached out to us with your details so that we can make this up to you." 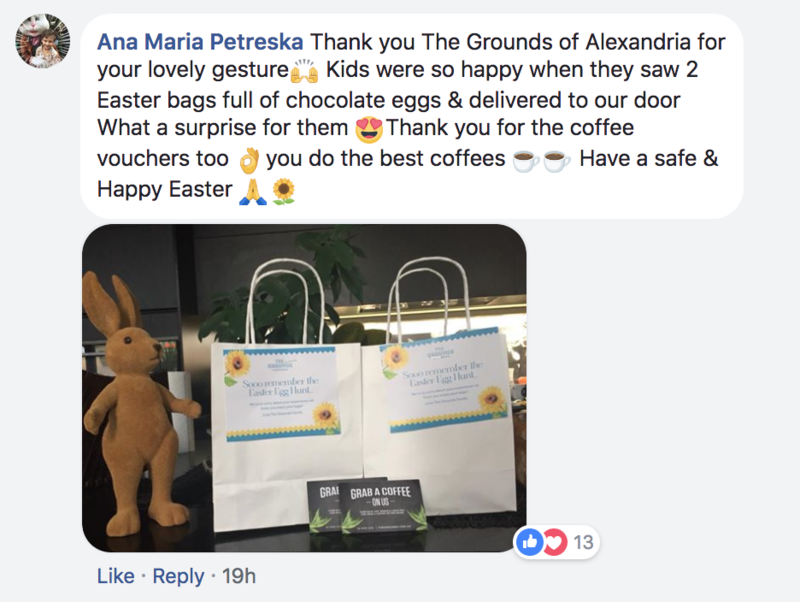 Later the team spent the hours (and days) travelling far and wide across Sydney and beyond to hand-deliver eggs to little hunters who missed out in an attempt to turn the situation around. As of Tuesday afternoon, they had visited hundreds of homes.

What Can We Learn From This?

It might be easy to point the finger at the organisers and sure, they ballsed up a bit - people preregistered for the event so they must have known how many people would show up. Perhaps they could have staggered the event. perhaps they could have put a limit on eggs. But is the Grounds really to blame for this? While most of the bad reviews left by parents would say an astounding yes, I tend to place my blame on bad parenting. Was there any need to fill your overflowing buckets with chocolate when you knew other people were waiting to join in? I mean, you could have just bought a bag of $2 eggs and thrown them in front of your kids for the same effect. The egg hunt is meant to be fun for everyone, not a survival of the fittest.

Now, full disclosure, I wasn't there to witness the depths of depravity. I was, however, at a nearby Easter Egg hunt at Camperdown Commons which was a lovely display of community spirit. My son is only three so doesn't have the sharp eyesight or problem solving skills of the older competitors in the race, but when he came out empty handed he was showered with generosity from other kids and parents who saw him scrambling around with nothing. He was happy to receive just one and sat there in the sun enjoying the crunchy cookie goodness. Yes, the hunt was for handmade gingerbread bunnies, so perhaps it is symbolic of the situation. Cadbury = greedy corporation, after all.

But what I really see from all of this is pure selfishness and greed from the parents. Yes Sydney is a dog-eat-dog city and we would probably push over our own grandmother to get to the front of the line for a free scoop of Messina, but is this the kind of message we want to send to our kids at Easter? Easter is supposed to be about sacrifice, giving to others and acts of kindness. I really hope those who ransacked the Grounds like looters after Cyclone Marcus are taking a good hard look at themselves..... I wonder if the chocolate still tastes as sweet!