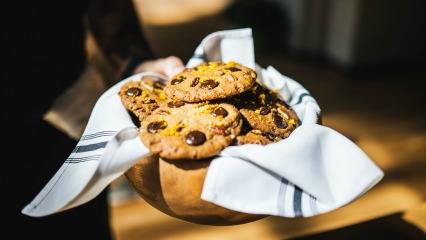 It’s the cookie Olympics! Country Living’s Lyndsey Matthews did the hard work for us and baked over 400 cookies in a bid to discover what the best kind really is.

Chewy? Crispy? With a homemade taste or a store-bought tanginess? Cookies are one of society’s ultimate dividers, a constant battle emerging between cookie enthusiasts to answer the age-old question: which is best? Thirty-five lucky co-workers were the guinea pigs in Matthews’ epic experiment. She gave them 9 batches of slight tweaks and twists to the ever popular Nestlé Toll House recipe, and asked them to score the baked treats out of 5 based on categories such as texture, appearance and taste. According to her “vocal” and “opinionated” survey group, here were the best cookies, ranked: This cookie scored an overall 4.18 out of 5. To make your cookie chewier, Matthews says to replace the all-purpose flour with bread flour. It was the winner in every category judged, with co-workers taking the remainder of the batch home (even after guzzling down mountains of cookies). Try it and let us know!

Whilst the other batches tampered with the original recipe, Matthews’ coworkers rated the original, unchanged recipe as the second best. It scored at overall 3.66 out of 5.

In third place is the butterscotch cookie- the butterscotch flavour, however, is subtle. How do you make it? Substitute the granulated sugar in the recipe with brown sugar. Matthews’ coworkers said they loved the chewiness and unique flavour. Overall score 3.55.

Whilst it looks thin and uneven to the eye, coworkers appreciated the taste and soft texture. Matthews says to “Double the baking soda to release more carbon dioxide when baked to make the cookies puff up more like a slice of cake” to make this little guy. It scored an overall 3.53.

Matthews rated this personally higher than her coworkers, who gave it an overall 3.41 to take it to fifth place. Whilst she believes it to be a fuller, richer cookie, the others didn’t seem to be as impressed. To make it, chill the dough from the Toll House recipe for at least 24 hours.

Crispy and less smooth than the other cookies, this ranked pretty poorly in all categories, scoring an overall 3.17. To make it, “swap out one stick of butter for the same amount of shortening”.

Matthews attempted to create a very visually pleasing cookie- and received the opposite result. It ranked near last for appearance amongst the target group, scoring an overall 3.07. It was made by adding about 28.3g (1 ounce) of corn syrup and the same amount of granulated sugar. Matthews suggests that for a pretty cookie, chilling the dough for longer is what really does the trick.

Whilst this cookie is easy on the eyes, the hack on the original recipe did not achieve the desired effect. It came out dry, instead of moist. To make this dud, add 2 extra cups of all purpose flour to dry ingredients. It scored an overall. 2.57.

Last, and least! Whilst there may be a few of you out there who adore a crispy, crunchy cookie, this one ranked last in every category by Matthews’ survey group. To make it, add 1/4 teaspoon baking powder and 1/4 teaspoon baking soda to dry ingredients. It scored just a 2.5 out of 5.

Thanks to Country Living and Lydnsey Matthews for the awesome experiment!