Six of the Best Indoor Playgrounds in Melbourne Shopping Centres 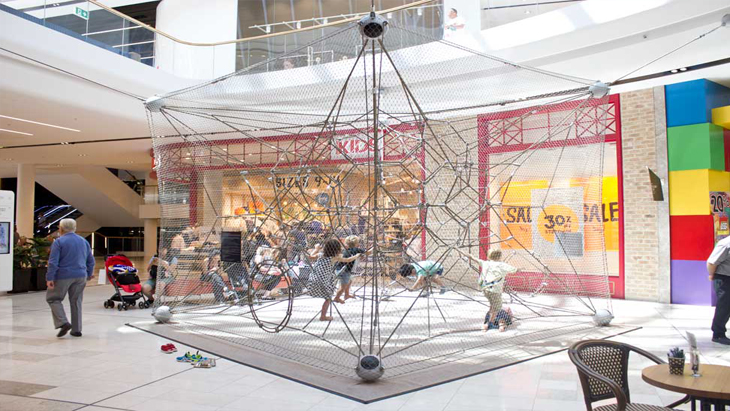 There comes a time in all parents’ lives when you need to do the shopping and the kids have to come. After wrestling prams and trollies through brightly coloured aisles filled with everything a small child could want to touch and pester you to buy, there’s nothing better than a nice sit down (preferably with a good drink) while the kids let loose some of that endless energy in a safe space.

In the last few years, shopping centres in Melbourne have really put a ton of effort into these family-friendly play areas, and as such we’ve got some of the best around. So grab a cup of something re-energising and park yourselves at one of these indoor playground wonderlands. Eastland left no stone unturned during recent redevelopments when it was time to create some cool places for kids to play inside its walls. This great rope spider-web cube set in a bright, airy space on the ground floor had even me wanting to get inside and scramble my way to the top!

Dotted throughout the centre are also soft play areas that double as contemporary art pieces, giant shiny blobs just begging to be crawled over and slid down, but as a standalone are just a beautiful feature.

But by far the most fun is the hidden slide out the back of Jimmy Grant’s (if you’re in the carpark, you’re in the right place!) – it’s one of the fastest slides I’ve ever seen, with my waif-like four-year-old getting shot out at the end as though from a cannon, before shouting “I want to go down again!” despite the momentary look of fear. I was tempted to go down myself… maybe next time. “Fully-fenced!” I hear you cry. “Child-proof gate!” “Comfy Couches within full view!” – yes, the Westfield Knox Play World really is all that and a bag of chips. There is plenty of brightly-coloured equipment to keep kiddos of all ages happy for a while. Cubbies to crawl around inside of, wheels to turn, telescopes to look through, wall games to play, a globe to spin – it’s anything but boring.

Plenty of family-oriented shops nearby and within a stone’s throw of both the food court and the cinema, definitely add this one to your list of places to hang when it’s too hot or cold outside. On level 3 of the Myer side of this gigantic shopping mecca, you’ll find the semi-fenced children’s play area, and a few welcome couches for you. The big slide shaped like a cloud is a hit with youngsters, as is the climbing frame and cute caterpillar. For the technology-minded, there’s a touch-screen computer game, and the big kids seemed to love tearing through the tunnel before launching themselves up the frame and down the big green slide. Inspired by the nearby Darebin creek, the Play World created just for Northland features a climbing frame with slides, rocking horse, table and chairs, and interactive fish pond (that I spotted both adults and children getting stuck into!).

The seating is wider and longer than it used to be, and even features a mobile charging station for parents. It IS right outside Toys “R” Us, and if your family is anything like mine, you’ll have to factor in a trip through the aisles there too!

There isn’t a ton of equipment in Playland, but both my four and five year olds had to be dragged away from it when it was home time. Right amongst the most family-oriented area of Westfield Doncaster lies the kid magnet otherwise known as Play World. You can sit with a Jamaica Blue coffee and eye off the window displays of maternity/baby/children’s stores nearby as the little ones let off a bit of steam.

There is plenty of seating, and it’s located underneath huge skylights so is quite a pleasant place to pass a little time. The kids will be occupied with two slides, a big red car (no Wiggles to be found though), wall puzzles, and padded climbing maze filled with bits and bobs to go over, under, and through. Another fully-fenced, fully kitted-out play space inside the North precinct – the whole place is interactive and pretty high-tech, with lights, touch-screen games (focused on violence-free creativity, reaction and logical thinking). The games are also built in to a long communal family food court table just outside the play area.

The little ones can run, jump, slide and crawl through the padded area, chill out in the book nook with a beanbag or two, or have their photo taken on the big screen in an astronaut’s outfit, as an alien, or as Chang-E, the Chinese goddess of the moon. Again, I had trouble getting my kids out of here, but at least there is plenty of seating for adults, and the area is quite large.

Where do you go when the groceries have to be done with kids in tow, but it’s terrible weather outside?