Should We Fight Our Kids Battles? 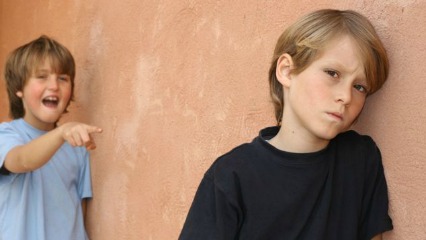 Although my son is only two years old, I cannot help but worry about the possibility that one day somebody might hurt his feelings. It’s enough to make me want to homeschool him while simultaneously teaching him self-defence manoeuvres. Alas, I am going to do my best not to be a helicopter parent. I know that giving him certain freedoms and independence is good for him and I just have to hope that he grows up with confidence and forms healthy friendships along the way. You can choose your friends but you can’t choose your son’s friends, right?

I know it’s not going to be easy. I remember when he was about 21 months old, we were in the park together and a boy around five years of age asked him what his name was. I replied for him, as you do, “his name is Billy,” I smiled. “Ewww that’s a girl’s name,” the boy announced to the whole playground. My blood boiled. Of course Billy had no idea what the boy had said but I felt like I had been stabbed in the heart. Would he be teased at school for his name? Should we revert back to William once he starts school? Is Billy more of a girl’s name? I can’t believe a five year old made me feel so insecure. I wanted to lecture him and tell his mother (where the hell was she?!) that he was rude. But of course I smiled, gritted my teeth and said, “that’s right, Billy can be a girl’s name or a boy’s name. What’s yours?” (I can’t remember but it was probably Brutus.) This particular incident is different; Billy was oblivious and carried on playing with dirt (as I spiralled into self-doubt) – but I wonder how I will react if this happens a few years later at school. I am sure I would want to swoop in and intervene. But should I?

According to friendship expert Dana Kerford, phoning up the other parents or marching up to the school demanding a solution can do far more harm than good.

“Parents need to view these situations as opportunities to teach their child valuable life lessons,” says Kerford who is founder of URSTRONG. “The message that we want to give our children is, ’You’ve got this!’ not, ’Don’t worry, I’ve got this for you!’.”

Instead of turning it into a United Nations style round-table, try to coach them from the sidelines so that are equipped to deal with conflict – it’s a natural part of growing up, after all. Dana shares the following Dos and Don’ts for helping your child deal with conflict:

1. Use it as an opportunity to learn valuable skills: Social skills don’t always come naturally to kids so use this as a chance to teach them, this also helps build resilience and strengthens their empathy.

2. Listen and understand: What might seem small to an adult can be huge in the eyes of a child. By listening and empathising, your child will feel validated.

3. Teach them to stand up for themselves:  Encourage your kids to confront their problems and not simply put up with bad behaviour – these are life skills that will be useful right into adulthood.

4. Teach kids the difference between healthy and unhealthy friendships: Another one that will be useful for many years to come. Do their friends make them feel good about themselves? If not, they should minimise the time they spend with people who make them feel bad and spend most of their time with friends who treat them well.

5. Be a good role model: Your children are watching and will mirror your behaviour. “If we don’t want our child to gossip, we don’t gossip” says Dana.

7. Tell them you’ve been there: Providing examples from our own life experience can help guide kids to a solution and make them feel less alone.

A word on bullying:

Bullying is different from normal conflict and can be distinguished by: “the severity of the action (such as a push on the playground vs. a punch in the nose), the frequency of the action (such as an isolated or rare incident vs. repeated or chronic behaviour), and the individual’s ability to defend him- or herself” Bullying also looks different between boys and girls. Bullying among boys is usually more direct and physical or verbal. Girls, however, tend to gossip or exclude the person from social activities.

If you are concerned that your child is being bullied it is best to approach the school, rather than the parents of the child, as schools are equipped to deal with these situations and take them very seriously.