The Best Playgrounds in Brisbane 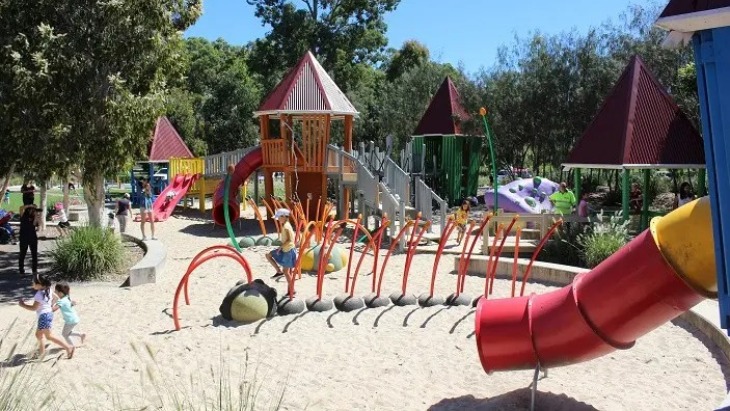 Did you really even have a childhood if you didn't visit the playground? And are you really even a parent if you don't try and get the kids out of the house and burning energy at a nearby playground nearly every day of the year? Yep, the best playgrounds in Brisbane have come to the aid of many a tired parent and many an energetic child time and time again - and we love them for it!

If you're looking for a new playground in Brisbane to test out, we've scoured the streets for 16 of the best playgrounds to make the most of the glorious Brisbane weather - enjoy!

16 of the Best Playgrounds in Brisbane

First up on our list of the best playgrounds in Brisbane is everyone's favourite Frew Park. The ginormous, space-like playground in Frew Park is located where the old Milton Tennis Centre used to be and offers plenty of outdoor play for Brisbane kids including tennis courts, playing fields, and the sprawling all-ages playground.

Calamvale District Park is a huge hit with Brisbane kids who love to climb, run, jump, swing and fly! The ginormous skywalk is undoubtedly the biggest drawcard of Calamvale District Park, but kids will also be drawn to the plentiful features of this Brisbane playground including the flying fox, basket swings, spinning discs, a miniature skywalk for the littlies, and bike tracks for little racers. Party-goers can also book one of the three designated sites within the park for birthday parties and special events.

Another awesome playground in Brisbane for kids who love scaling to new heights, Rotary Park in Bellbird Park is all about climbing and sliding! With a giant tube slide, climbing nets, rope climbing dome, and climbing structure with its own lookout, it's safe to say the kids will be pretty puffed after all that climbing! There are also smaller climbing nets and a tube slide for the littlies plus swings, bike tracks, picnic tables and seating.

The sprawling South Bank Parklands delivers the playground goods with not one, not two but three playgrounds. Frequented by families who love to picnic and play, Picnic Island Green offers plenty of green open spaces surrounded by native vegetation and tranquil wildlife (don't miss the fishpond!) plus an adorable playground with a basket swing, cubby house and slides.

Riverside Green Playground is one of the most popular playgrounds in Brisbane and for good reason. The brightly colour playground is pure adventure heaven with a pirate-themed toddler zone, climbing wall, skywalk, belt bridge, giant hamster wheel and something called a supanova spinning wheel!

For those keen for some water play with their playground adventures, Aquativity is South Bank's water park and will keep kids entertained and refreshed with wading pools, fountains, tipping buckets and more.

The stunning green oasis in the heart of Brisbane City that is Roma Street Parklands isn't just for nature lovers, but playground lovers too. The Children's Garden Playground within Roma Street Parklands is a state-of-the-art play space nestled amongst the stunning natural gardens of the Parkland. Kids can get active and explore imaginative play on the jungle-themed treehouse, slides, tunnels, rope bridges and more.

If you're looking for a playground in Brisbane that's close to the water, Lower Moora Park at Shorncliffe is the spot to go. Part fort, part wooden pirate ship, the theme at Lower Moora Park playground has a nautical/adventurous feel and will ensure hours of imaginative play as kids get to explore all the nooks and crannies of the wooden play structure and get busy in the sandpit. And once you're finished at the playground, a stroll along Shorncliffe Pier is a must just for the great views.

Whites Hill Reserve is a beloved Brisbane playground for southside families. The playground is massive and features lots of accessible play equipment including swings and diggers and even has an enclosed dog park if you want to bring your furbaby along for a family day out.

The massive playground at Darlington Parklands has so much to offer kids they won't know where to start! The super playground in Yarrabilba opened in 2014 and has been keeping Brisbane kids entertained to no end with wall-to-wall fun starting with the free water park. Water fountains, water spouts, splash pools, rock pools, running streams and more are accessible 365 days a year.

For kids who love imaginative play, Hidden World Playground in Fitzgibbon will become one of their favourite playgrounds in Brisbane. The colourful playground resembles a princess castle or knight's fortress with its multiple towers and adjacent bridges and walkways. The bright red spiral slides lead down to the huge sandpit area and there's plenty of room for kids of all ages to run about - and don't forget to look for the hidden purple creature!

Hawthorne Park is a fabulous bright and colourful playground in Brisbane that is fully shaded with shade sails that provides a unique play opportunity for kids of all ages and abilities.

Attention train lovers! Head to Milton Train Park for its fully fenced playground with a train theme. This Brisbane playground is a winner for us as it has netball and basketball courts to keep the older kids entertained while the little ones run around.

Also located in Yarrabilba, Buxton Park has one of the coolest things we've ever seen in a Brisbane playground: a grass caterpillar! The grass caterpillar at Buxton Park gets its name from its bumpy shape and the fact that it snakes its way around the playground offering loads of fun for kids to run, jump and ride on. Other playground essentials included at Buxton Park are a huge 8-metre play tower, two huge slides, in-ground trampolines, and even an outdoor obstacle course!

Another sprawling botanical oasis in the Brisbane CBD, New Farm Park not only offers gorgeous natural surrounds, but also a fun creative playground. New Farm Park Playground is nestled amidst the giant fig trees of the sprawling 37-acre park and is the perfect spot to test the limits of adventurous kids. The New Farm Playground has fort-like structures for no end of imaginative play plus swings, slides and plenty of space to run.

Also known as Wynnum Bandstand Park, this gorgeous playground is protected by shade structures and trees and has a nautical theme. There is a play carousel for wheelchairs and also a supportive swing seat with a safety chain and harness.

Keong Park is also known as Turner Playground and is a real hidden gem as far as playgrounds in Brisbane go. It features a large green space with lots of room to run around, a bike and scooter track nearby as well so the older kids don't get bored. You can also hire the community centre that's attached to the playground for kid's birthdays and special events.

We love playgrounds in Brisbane that have lots of different areas for kids to interact and create their own games, and Teralba Park in Everton Park offers just this. From playing 'Shop' to digging for treasures in the sandpit, swinging on the swings, running through the maze, playing on the seesaw and sliding down the slides, there is so much on offer at Teralba Park Playground.

Other Things to do in Brisbane