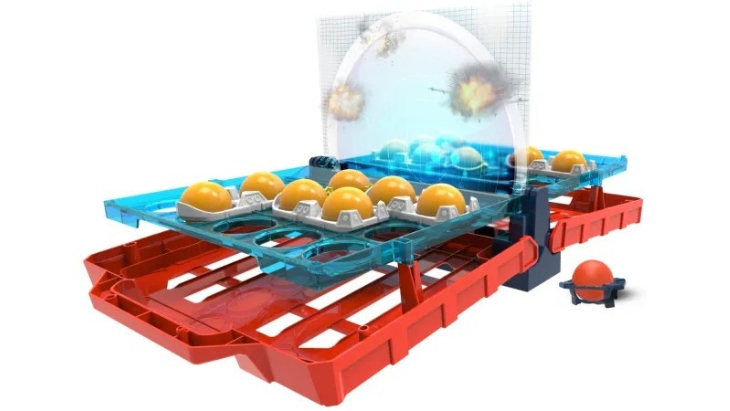 Beer pong is an icon of youth; usually represented by red plastic cups, rowdy groups of house partiers and lots of people with questionable aim.

For those that like to relive their youth, Hasbro is realising Battleship Shots—a game that fuses traditional Battleship elements with your classic game of beer pong. Note: for the young’uns, simply sub the beer for juice. Easy peasy!

The Mechanics Of The Game

In Battleship Shots, the game differs dramatically from your usual Battleship as there are no more tiny little marker pegs to worry about. Each player still strategically arranges a tiny fleet of ships however they see fit, but it’s now on a much smaller 3x5 grid that remains visible to your opponent at all times.

Now, instead of blindly calling out coordinates in the hope that you’ll score a hit, players physically bounce balls over a divider onto their opponent’s grid, hoping one lands inside a ship which counts as a hit. The winner is the first to sink their opponent’s entire fleet, or the first player to get a special red ball to land in their opponent’s tiny life raft.

In our opinion, it sounds like a fun family game to play when you want to blow off a little steam—especially if you incorporate a rule that players take a shot whenever they take a hit. Kids can get rowdy on juice, and parents can hark back to their uni years by taking shots out of red cups. What’s not to love?

Now, to the bottle shop for battleship!