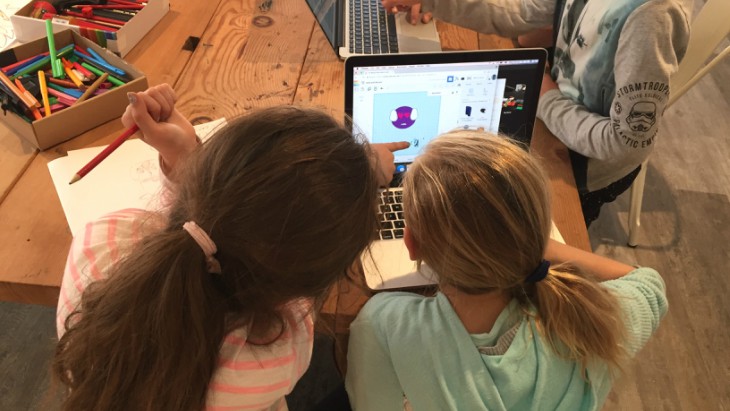 School holidays are great for family time and short trips. They’re also the perfect time to try something new. This break, my 8-year-old daughter, Nicola, tried TinkerTank’s School Holiday Camp, in Manly, where she tested out robotics, coding, 3D printing, animation and video production. TinkerTank is the country’s first Maker-Space for kids 5 and up and teaches STEAM (Science, Technology, Engineering, Arts and Mathematics).

Book one day or as many as you want. (We opted for one day.) She had dabbled in robotics before school and liked a coding camp she’d taken earlier in the year, so I thought this would be a good fit. You don’t need to have any prior experience though.

A Staff Of Magnificent Mentors

Essentially, staff members are called mentors and run the show. The mentors gave a pep talk for the day, surveyed who had experience and gave a run-down on how the day would go. There’s only one rule for the kids to focus on: respect (for others and for the materials). I liked that they didn’t overwhelm them with tech talk and had a great “can do” attitude about all the activities. I was immediately struck by how sweet, friendly and open all the mentors were. Each person genuinely wanted to be there and had a love for kids. You could see it in their eyes with how they interacted and spoke with the kids. 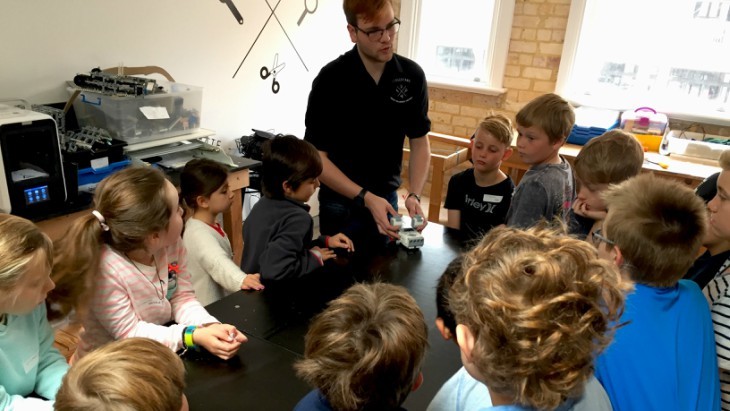 TinkerTank is on the first level of the building and you need to get buzzed up to enter. They have two offices flanking the stairs. This helped keep noise down and broke up the space. There’s a bathroom on that same level and kids are told they can go when they need to, but that they shouldn’t ever go up or down the stairs without one of them.

A Typical Day at TinkerTank

Kids walk in and get a name tag. Then they seem to all flock for a peek at Spike, TinkerTank’s pet bearded dragon. The camp’s all-ages and they break up the day into two parts: morning and afternoon. Groups were split into age group and topic interest. Students on our day were split into three groups with the choice of picking two activities throughout the day: 3D printing, stop-motion video, LEGO robotics and coding. Nicola raised her hand to be put in the 8 and up group with previous robotics experience. Technically, this group fit, but I was a bit surprised at how much she jumped right in. This showed me how comfortable she felt right off the bat. 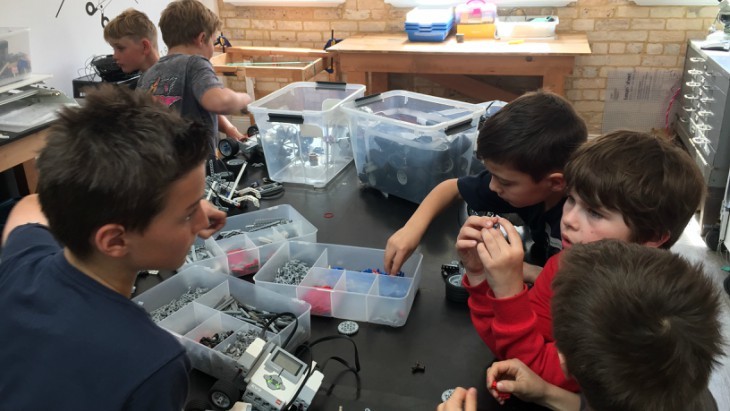 Her mentor gave a 5-minute recap of how to build a robot, which doubled as a how-to for the newbies. He spoke in ways kids could understand: “The motors are like our own arms and legs.” (I might have picked up some tech knowledge along with them too.)

Equipment was set on the table in easy-to-reach, big plastic tubs, while all the parts were colour-coded. Kids paired up with a buddy to build a bot together. There were multiple tables with stools and places to stand. Once the robot is created, you do challenges with it, like drive it across a wood plank without falling off, attaching to a zip-line type string and sliding across and climbing up a rope swing. Challenges are hard but not unattainable. 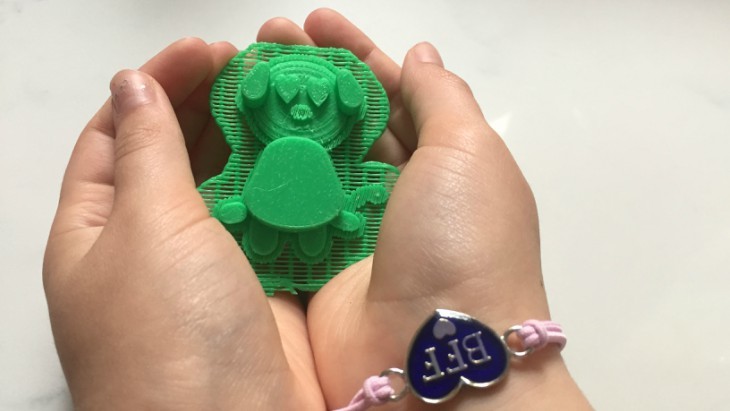 Inside the groups, all projects are student-led, so the kids decided what type of robot they wanted to make and then the teachers helped them build it. Later in the day, in Nicola’s group, some kids wanted to make stop-motion videos while others wanted to create a 3D model. Both the videos and the models were of things the kids created or dreamt up. Nicola made a puppy with her buddy that was then printed on a 3D printer. Others created scenes with LEGOs and then used iPads to shoot it with a special software program.

At the end of the day, some kids entered into a battle bots contest while their peers (and parents just before pick-up) cheered them on. Stop-motion movies were shown on the big screen and 3D models were printed. 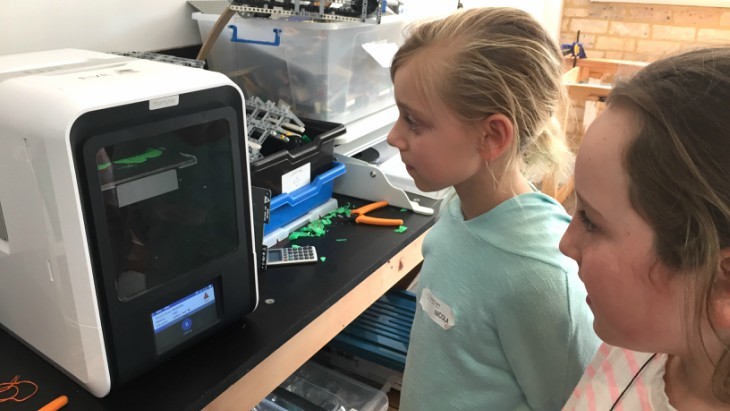 What Makes TinkerTank Stand Out?

In addition to the stellar tech-savvy staff, the camp really exposes kids to things they might not normally have access to at home. The mentors even showed me how she could make her own stop-motion movie at home with certain apps. I figured the all-ages range might pose a problem, but I couldn’t have been more wrong. Mentors constantly circled around the tables, jumping in to troubleshoot and connect with each student along the way to ward off frustration. Robots can’t go home with students at the end of the day, but 3D models can, as well the videos. (Those are even uploaded to a YouTube channel for easy viewing.)

The Kid's Verdict Is In

She said, “5 stars, Mum, I loved it!” Immediately followed by, “Can I have my birthday party there?” (Which is still 6 months away.) She said one of her favourite parts was high-fiving her new friend when they finally got their robot to finish a difficult challenge. 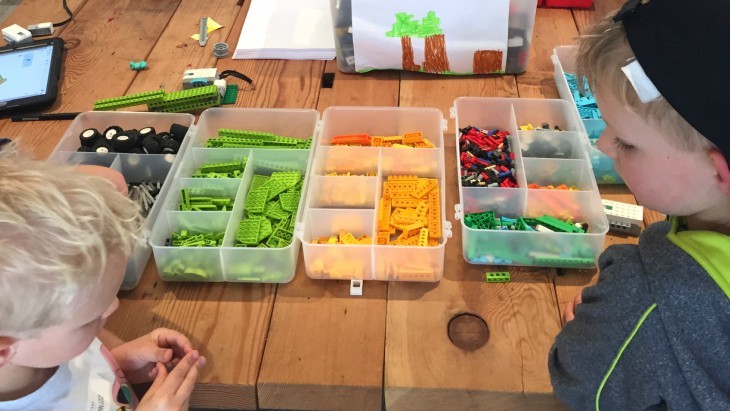 What Made Mum Happy

TinkerTank is not only a blast for the kids, it’s educational and inspiring all the same. The project-based groups kept things interesting and the mentors really have a way of making kids feel special and that their problems are heard. I also liked that the mentors didn’t immediately give answers to problems. I often heard things like, “Hmmm, why do you think your robot did that?” And then the kids would follow up with their thoughts. That turned it into more of a collaborative.

They also take the kids outside for lunch by the beach and snuck in some outdoor play. We’ll definitely go back. 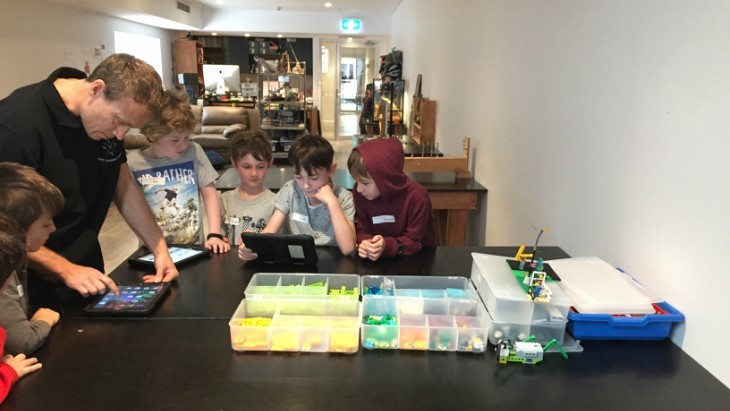 Not all 3D models get printed before camp ends. The printing takes time and it’s not always feasible before pick-up time. Because of this, they run the printers throughout the night and then items are ready for pick-up in the following days. We did have to go back for ours. No biggie.

They offer after-school busses to several schools, like Harbord Public and Seaforth Public School, as well as Before School care and drop off to Manly Village Public School.

Memberships are flexible and student lead. There are no minimum terms, just $45/week and you can skip and pause whenever you like!