The Best Kid-Friendly Caves To Visit Near Sydney

Australia is celebrated for its bountiful natural wonders, and there are unique and stunning places to discover at every turn. Within hours of Sydney, you can be transported to another world, full of exotic hideouts and hidden gems. These spectacular caves systems are a sight to behold, and children will be awestruck by the geological masterpieces. Take a trip to one of these amazing spots for an eye-opening, mind-boggling adventure. The Blue Mountains is well-known for the unparalleled beauty of its world-heritage wilderness, and the Jenolan Caves is probably it’s most famous natural phenomenon - and the most magical. About 3hrs from Sydney, and dating back more than 340 million years, this limestone cave system is one of the largest, oldest and most spectacular in the world. There are 9 caves to explore surrounded by fascinating limestone formations and flowing underground rivers.

As well as taking in the beauty and scale of this national treasure, there is so much more to see and learn with roaming wildlife, bush walks, underground activities, a range of tours and aboriginal culture all around the caves. The Blue Lake Loop walk is a short, easy walk so the best for families with young kids, and you can access some special spots like Devils Coach House lookout and Nettle cave. The dedicated children’s discovery tour, Bones & Stones, will have them hunting for fossils and bones inside the secret parts of the caves. 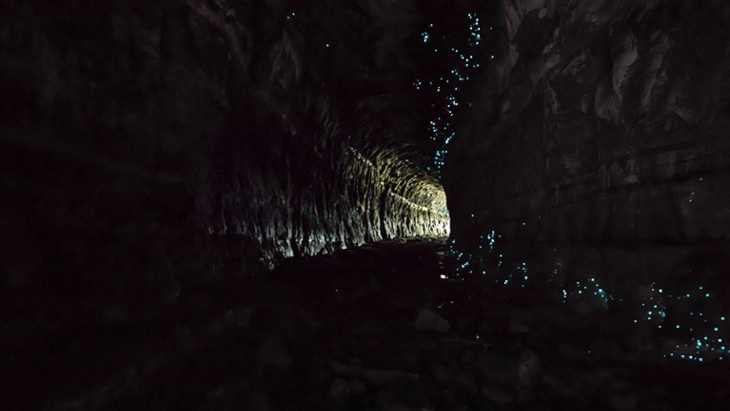 An old abandoned railway line has become home to a multitude of sparkling creatures, creating the Glow Worm Tunnel - one of the best places near Sydney to witness this breathtaking spectacle. They are however sensitive to disturbance like noise, lights and touch so tread carefully. The dark, moist conditions make it an ideal glow worm habitat and thousands of glittering glow worms have attached themselves to the walls and roof of the 400-meter tunnel to emit their blue glow (an ingenious skill to lure prey!) They are even visible during the day - a rare feature attributed to this pitch-black tunnel.

Located in the World Heritage-listed Wollemi National Park, about 3 hours from Sydney, there is plenty more to seek out in the picturesque area. The Glow Worm Tunnel walking track is a fun experience for families and offers impressive views of pagoda rock formations, native flora, and local wildlife, en route to the illuminated tunnel. Look out for the Jurassic Wollemi Pine - a 100 million-year-old living fossil from the dinosaur days.

Find out more about Glowworm Caves Near Sydney. 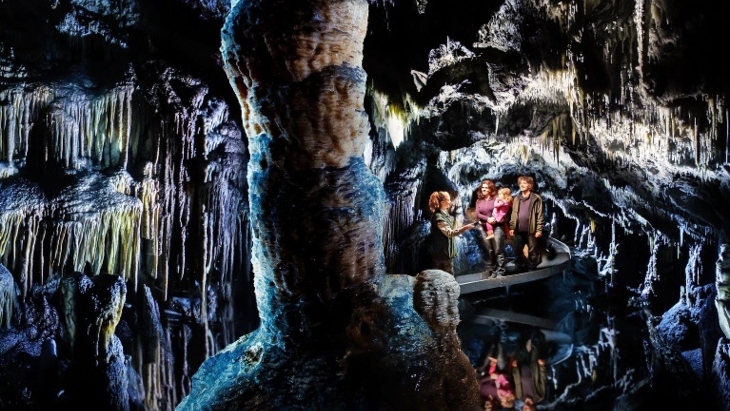 Yarrangobilly Caves are a wonderland of stalagmites, stalactites and cave corals. Located in Kosciuszko National Park, this spot is a bit further afield - about five and a half hours from Sydney - but well worth the road trip to discover this awesome underground world. It is a wonderful spot for a family weekend and you can even stay at Yarrangobilly Caves House! There are six caves in the region, and three are lit and open for exploration. Take a guided underground tour of the spectacular Jersey Cave or Jillabenan Cave and witness their impressive delicate structures. The largest cave, South Glory Cave has automated feature lights that assist you through a self-guided tour, perfect for taking the time to investigate the incredible formations.

Once you’ve emerged from the caves, take a short walk to the Yarrangobilly Caves Thermal Pool - a geothermal highlight that fed by natural springs. The pool stays at a constantly-warm 27 degrees - even in winter, surrounded by snow! Don’t forget your swimmers so you can soak in this magical, steamy pool. It gently overflows like a waterfall into a smaller wading pool for kids to splash around in. There is a picnic area by the pool and several walking tracks around the caves to take in the striking natural surrounds. Wombeyan Caves is an easy drive two and a half hours south from Sydney and a local hotspot. With an expansive cave network, there is so much to explore, you might want to camp out for a night or two at the site’s well-serviced camping grounds.

There are guided tours to the Wollondilly, Junction and Kooringa caves, and Figtree Cave is a fantastic self-guided experience. Kooringa Cave is the smallest of the show caves but is one the most decorated and impressive, packing in a spectacular array of stalactites and stalagmites. Wollondilly Cave is the longest and most varied cave in the network and stretches across an incredible five major chambers, linked by passages created by free-flowing streams. Junction Cave boasts unique formations of stalactites and stalagmites that have been created over millions of years and it’s renowned for its rich colours and spectacular embellishment. The self-guided Figtree Cave experience is leisurely and hands-free with the interpretation and lighting electronically controlled. The trip through the cave, culminating in Victoria Arch, is easily accessed by all ages.

As well as a maze of underground passages, streams, and caverns to discover, there are bushwalks, creeks, waterfalls and water holes to explore, and endangered species, such as several species of wallaby, bird, possum, and wombat to meet in their natural habitat, so it’s a fantastic place for kids to spend some quality time in nature. Just a three and a half-hour drive from Sydney and you’ll be transported to another enchanting underworld with the largest natural limestone bridge in the southern hemisphere! Archway Cave is the most famous of the Abercrombie Caves and the most extraordinary feature of Abercrombie Karst Conservation Reserve. Take a self-guided tour through the huge rock formations, see an original gold miners platform and be captivated by striking views of the karst landscape. Everyone will love this unforgettable cave experience, especially the kids.

A trip to Archway Cave and the surrounding reserve promises an incredible adventure. There are great camping facilities at the Abercrombie Caves Campground and you can relax by the tranquil creek that runs through it. There are tours to other caves in the Abercrombie Caves system to explore and magnificent waterfalls and bushwalking tracks. Look out for local wildlife such as wallabies, lizards, scrub wrens and lyrebirds.