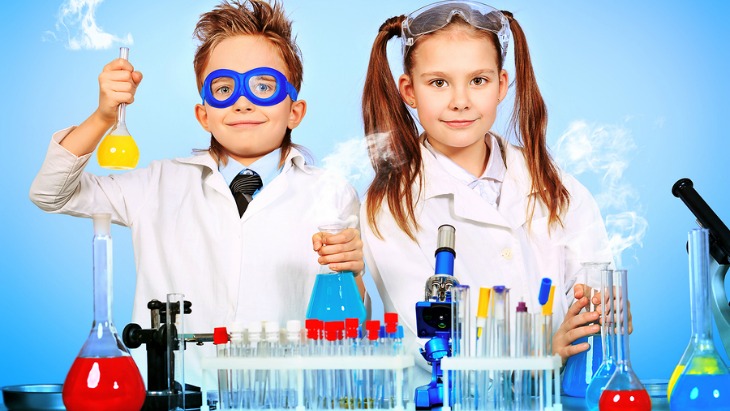 Warning: A few of the experiments use Borax as an ingredient. This is a natural ingredient often used as a household cleaner. It should not be eaten so keep it out of reach of small kids.

1. Pour the tonic water into the jar.
2. Place the black light behind the jar and flick on the light.
3. Watch as the water turns bright!

Don’t worry: the water is still safe! So feel free to have a drink of glowing water (warning: it’s full of sugar).

What happened?
Tonic water has chemicals called phosphors. These phosphors turn UV light (which we can’t see) into visible light. Think of the phosphors as fireflies; they only become visible at night by glowing! A similar method is used in forensic science and banking.

RELATED: How Safe is Borax in Science Experiments?

2. Tornado in a Bottle

1. Fill the plastic bottle with water until it reaches three-quarters full.
2. Add a few drops of dish-washing liquid.
3. Sprinkle in a few pinches of glitter (this will make your tornado easier to see).
4. Put the cap on tightly.
5. Flip the bottle upside down and quickly spin it in a circular motion for a few seconds.

A small tornado should be forming but you may need to try a few times.

What happened?
When you spin the bottle it’s making a vortex. Water spinning around the centre happens because of something called a centripetal force; this is an inward force that pushes objects and fluids towards the centre.

1. Fill the bottom of the larger container with PVA glue.
2. Add a few squirts of water and stir.
3. Add 2 or 3 drops of food colouring and stir.
4. Add a squirt of borax (possibly a bit more depending on how much PVA glue you used).
5. Stir the mixture up and put it into the smaller container. By now the mixture should be joining together and ta-da putty!

What happened?
Everything is made of chemicals and certain chemicals when put together in the right environment, react in strange and wonderful ways to make something new. PVA glue is polyvinyl acetate, and the borax has sodium borate. When you mix these two in water they stick together because of the glue. It then becomes a compound. This compound drinks in all the water and becomes squishy and sometimes bouncy.

4. Make Your Own Crystal Snowflake

The crystal snowflake science experiment will take a little longer and will need to be left alone overnight. Parents will also need to help out when cutting the materials.
Ages: 5+

1. Cut a white pipe cleaner into three sections of the same size. Twist these sections together in the centre so that you now have a shape that looks something like a six-sided star. Make sure the points of your shape are even by trimming them to the same length.
2. Take the top of one of the pipe cleaners and attach another piece of string to it. Tie the opposite end to your small wooden rod or pencil. You will use this to hang your completed snowflake.
Carefully fill the jar with boiling water
3. For each cup of water add three tablespoons of borax, adding one tablespoon at a time. Stir until the mixture is dissolved but don’t worry if some of the borax settles at the base of the jar.
4. If you want the snowflake to be a bit more lively add a few drops of food colouring
Put the pipe cleaner snowflake into the jar so that the small wooden rod or pencil is resting on the edge of the jar and the snowflake is sitting freely in the borax solution.
5. Leave the snowflake overnight and when you return in the morning you will find it covered in crystals!

What happened?
Remember how we mentioned that everything is made of chemicals and that different chemicals react with each other? The same thing is happening here. Crystals are made of molecules that form repeating patterns.

Borax is sodium borate and when it’s added to boiling water it dissolves. It dissolves because hot water molecules more faster and spread apart more quickly. It then becomes a solution. When the solution cools down the water molecules huddle close together and the borax solution is suddenly left with very little room! Crystals then form on top of each other because of the little space!

1. Pour water into the plastic bottle until it is around one quarter full.
2. Pour in vegetable oil until the bottle is nearly full.
3. Wait until the oil and water have separated.
4. Add around a dozen drops of your favourite food colouring to the bottle.
5. Watch as the food colouring falls through the oil and mixes with the water.
7. Cut an Alka-Seltzer tablet into smaller pieces (around 5 or 6) and drop one of them into the bottle and watch as it bubbles up.
8. When the bubbling stops, add another piece of Alka-Seltzer and enjoy the show!
9. When you’re done with the tablets screw on the bottle cap tightly and flip it back and forth: what happens??

What happened?
We’ve mentioned that liquids have molecules. Well, water molecules and oil molecules are very close so they don’t like to mix! All liquids have densities (similar to thickness) and the denser liquid will go under the other, in this case, water will fall beneath the oil. The food colouring will sink beneath the oil and mix with the water. The tablet releases bubbles of carbon dioxide gas that floats to the top, sweeping bits of colour water too! When the gas reaches the top, it escapes and the coloured water falls to the bottom. The tablets fizz because they have citric acid and baking soda. These react with water and make sodium citrate and carbon dioxide gas; the bubbles that carry the coloured water!

Please note that the bath bombs will take a few days to properly dry.
Ages: 5+

1. Grease the sides and bases of a large muffin tray with a small amount of almond oil.
Place the citric acid and bicarbonate of soda into a large bowl. Mix the ingredients together well, to form the base mixture.
2. Scoop out about half a cup of this mixture and put it in into another bowl. This will make about one or two bath bombs (depending on the size of the holes in your muffin tray).
3. Add the flower petals or body glitter to the base mixture.
4. In the small glass jar, mix together 6 drops of your scented oil, 5 teaspoons of sweet almond oil and about 10 drops of food colouring.
5. Gradually pour the oil mixture into the half cup of the base mixture. While wearing rubber gloves, quickly mix it all together. The mixture is ready when it stays together in your hands without crumbling too much.
6. Spoon the mixture into the muffin tray. Press it down firmly.
7. You can use the rest of the mixture with other types of scented oil or food colouring to make more bath bombs.
8. Leave the bombs in the tray to set for a few days.
9. Carefully up-end your bath bombs to remove them from the moulds.
10. Fill a bath, hop in and drop a bomb. Watch it explode!!

What happened?
This is another fantastic chemical reaction! When the bath bomb dissolves in the water, the citric acid and the sodium bicarbonate (notice how the same chemicals keep popping up?) react, creating sodium citrate. As they react, carbon dioxide is released making the fizzing in the bath. The sweet almond oil is released during this reaction. It will form a thin layer on your skin which can help to moisturise it. The lavender oil is for fragrance.

Other Indoor Activities for Kids