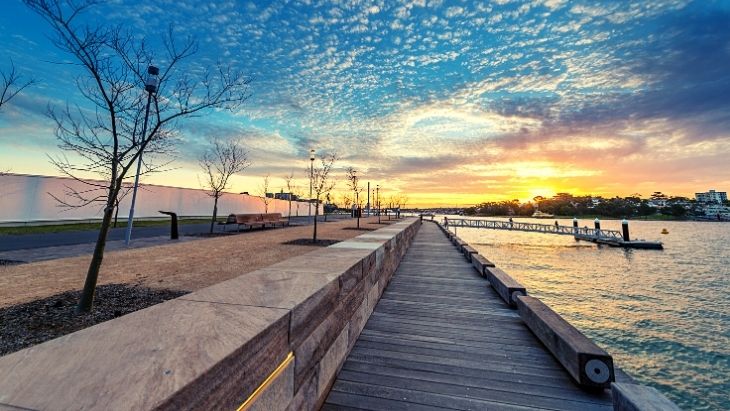 Get ready to pound the pavement! Another piece of the epic Barangaroo puzzle has been laid, with a much-anticipated 300-metre stretch of the Barangaroo Foreshore Walk along the western edge of the city finally ready for locals, cyclists and commuters.

The missing link in the 11-kilometre promenade that hugs the Sydney Harbour foreshore has now brought completion to the expansive leafy boulevard - a popular and picturesque retreat within the urban hustle and bustle - with a generous 15-metre-width to allow for social distancing. The path also provides a gateway to previously inaccessible parts of the city.

“This area of Sydney has not been open to the public for 200 years,” Planning and Public Spaces Minister Rob Stokes said. “So now, as part of this grand vision, we’ve got a continuous 11 km walkway all the way from Anzac Bridge to Woolloomooloo Bay.”

The walkway is an integral part of the 6-hectare waterfront Barangaroo Reserve that boasts over 70,000 trees, ferns, palms, shrubs and native plants. According to Mr Stokes, Barangaroo has helped to transform a former industrial precinct into a lush natural landscape.

Visitors can spend a relaxed afternoon strolling the Barangaroo Reserve shoreline, stopping at various points along the walkway to appreciate breathtaking views of Sydney's sensational harbour and some iconic landmarks. There are plenty of green spaces for picnics, it's a great spot for kids to explore and it is pet friendly provided that fur babies are on a leash!

Premier Gladys Berejiklian, who opened the final link this week, said the walkway reflects the government’s commitment to making half of Barangaroo open public space which includes another boardwalk around a new cove previously opened in the area. A public pavilion will also be built on Waterman’s Cove over the next year.

Mr Stokes shared a 'bold vision to liberate our foreshores' of which this was only the latest iteration. Future additions to the foreshore walkway will include an extension to White Bay at Rozelle and links from the 77-hectare Bays West to the historic Callan Park, at the southern edge of Iron Cove.

Find out more about Barangaroo.