Check Out The Majesty Of Moomba 2020 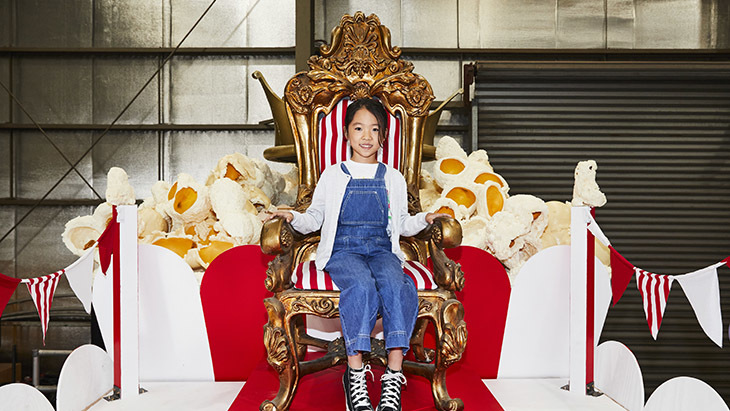 Moomba Festival is back this Melbourne long weekend culminating in the Moomba Parade on Monday. We check out the highlights and talk to one of the float designers.

Billing itself as “Australia’s largest free family festival”, Moomba returns to the banks of the Yarra River with rides, food trucks, sideshow alley and the all-important Moomba Parade with floats hailing the Moomba Monarchs (comedians Julia Morris and Nazeem Hussain).

This year a bunch of kids were lucky enough to help design the floats and we talked to nine-year-old Erica, a Moomba veteran.

How long have you been going to Moomba for?

I have been going to Moomba for lots of years now – since I was 3 years old, so this will be my 6th year.

Why did you want to design a float for Moomba?

I design a float every year at Moomba, so I like to try every year to see if I get into the parade and win the competition.

Where did you get the idea for your design?

I’m not sure – I just love popcorn, so I decided to make it look like lots of popcorn!

What are you most looking forward to at this year's event?

I’m most looking forward to riding on my popcorn float in the Moomba parade this year.

Other Moomba Festival highlights include:

Those magnificent men and women in their falling machines. The highlight of any Moomba weekend has to be the Birdman Rally where game contestants make their own homemade flying contraptions and jump headlong into the Yarra River. Grab your spot early and enjoy the chaos.

All the fun of the fair as the carnival comes to the city with over 30 rides on offer. There are the big rides for teens, Little Land for the younger kids and some that will scare the adults, too.

The Nylon Zoo on the Teardrop Lawn

Littlies can get dressed up as a kangaroo, bilby or mushroom and join in this magical performance that runs all weekend. Kids get to play in these specially designed costumes and use their imagination to move as their spirit animal would.

There are free screenings every night of the festival including family flicks like Sing and Trolls. Bring a blanket and set up for dusk when the big screen turns on across the river.

An interactive installation that uses light and projection to encourage play, for kids 5-12 years old.