Prepare To Be A-Mazed By This 'Stranger Things' Inspired Maze 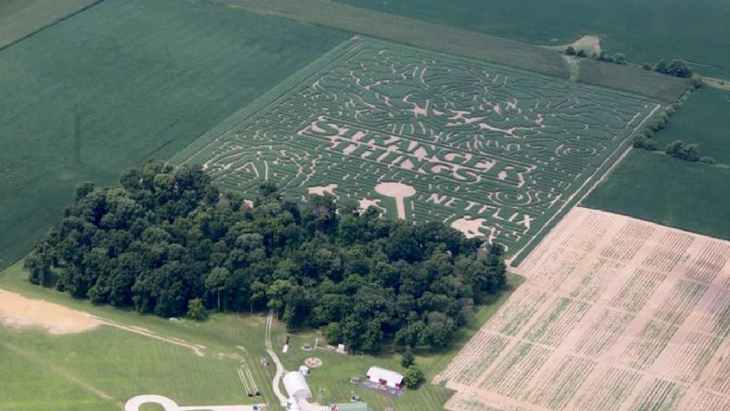 If your mind wasn't already blown by the Netflix show itself, this Stranger Things inspired maze is sure to plunge your brain — quite literally — into the Upside Down.

The maze was recently unveiled in Lafayette, Indiana — in the home-state of fictional town Hawkins where the show is set. Sprawling across the equivalent of 15 football fields with more than 16km of path, the maze has been created by Exploration Acres, home to the largest annually-planted corn maze in northwest Indiana.

The popularity and binge-worthyness of the show prompted the Exploration Acres team to pick Stranger Things as their theme for the 2018 maze, after realising that they could create a truly immersive experience that would hit the right note with the show's fans and maze-enthusiasts alike. The astonishing intricacy of the maze is thanks to new technology that allowed the team to plant the maze design like an inkjet printer; dropping seeds into the precise design they had imagined.

The design centres around the Katniss Everdeen of the Upside Down, Eleven, however one of the show’s (not-so) favourite Demogorgans also makes an appearance, alongside crew members attempting to flee from its terrifying clutches.

This fun, family-friendly maze is open to the public from September 14th until October 28th, and with the next season of Stranger Things not set to drop until late 2019, this maze-masterpiece is set to prove as easy to get lost in as the show itself.

Looking for a maze that is closer to home? Check out our guide to the best mazes near Sydney.