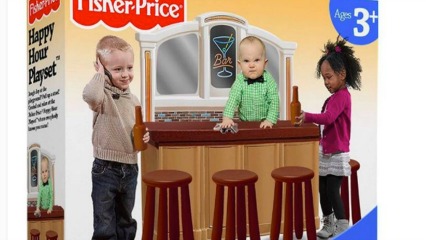 Toddlers standing around a bar, sipping beers… probably not the playtime scenario mums have in mind for their little ones. Fisher Price would’ve got the shock of their lives recently when fake, photoshopped images of their so-called ‘Happy Hour Playset’ surfaced on social media.

The playset, which shows (pretty hilariously if you ask us), a grumpy looking baby playing the bartender wiping down the counter, and two other children holding beer bottles. Many parents, fooled by the trickery of Adam Padilla’s Instagram account, flooded Twitter and Fisher Price’s Facebook with angry comments claiming that such a toy would encourage bad habits in children.

Padilla spoke to Mashable about the image that caused such a kerfuffle. He said: “My 21 month-old daughter gave me the idea while playing on her kitchen playset at our apartment. I mentioned to my wife, Willow, that it would be hilarious if a major toy company created a bar set for toddlers.
The next day I Photoshopped the package design and posted it on my Instagram with a caption that made it seem like it was an actual product.” It went viral from there. Here’s the photo that sent parents into a tailspin:

Whom wants this for Xmas? ??

Initially, the potential for a toy promoting underage drinking incited this kind of response: Other comments included “Fisher Price should be ashamed of themselves”, “someone needs to be fired” and “shame on them for making it and shame on those for buying it!”
After it was revealed as a fake, some people adopted a far stronger sense of humour. We’ve had a giggle about this at the ellaslist office, but have to admit, blew a secret sigh of relief when we confirmed it was all just a joke. Beware the dangers of photoshop!