Why Men And Women Are Different 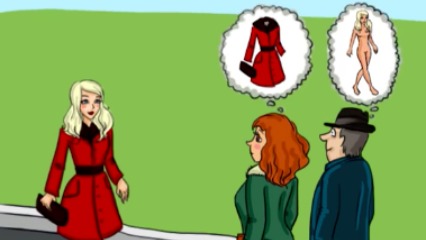 They say “men are from Mars” for a reason! Check out this funny video highlighting just how different men and women truly are- from haircuts and breakups to what we see when looking in the mirror.


Why We’re Different, According To A Psychologist

Psychologist Peggy Drexler from Cornell University wrote an interesting piece for Psychology Today. According to her, this is what really makes us different, and surprisingly, how we are actually more similar than you think: 1. Multitasking: Apparently, women truly are better at it than men, usually around 70% of the time. So, if you ask him to have a serious conversation whilst he’s cooking or otherwise pre-occupied, don’t be too disheartened when he says “later”. Drexler says that this is how he will operate best.
2. Fight Vs. Flight: Men take flight, women fight, according to Drexler. Women want to unleash, particularly at the end of a work day when they wish to rehash what happened, who did what and how they can fix it. Men are more likely to have a short outburst, and that’s that. He will often be less inclined to stress about work, and more likely to “check out” or call in sick.
3. Both Sexes Want It All: It’s just an assumption that men are extremely ambitious and chase wealth and recognition whilst women chase work-life balance. Two-thirds of both sexes reportedly feel that they can “have it all” and achieve a balance, both sexes ranking these aspects as the same in order of importance: Work-life balance, then money, and then recognition.
4. She’s Lovey-Dovey, He’s Not: Drexler thinks that rather than men actually being emotionally disconnected and unwilling to take things deeper, men actually have the same feelings women do, but are unable to express them.
5. Friendship Matters: Women are more likely to be found talking to and confiding in their plethora of friends. Men have fewer friends on average, and will be more likely seen “doing” stuff with their mates rather than chatting and confiding. Interestingly, one study found that men are just as likely as women to cite “emotional support, ability to confide in the person, and having someone to care for them” as important qualities of friendships.
6. We Regret To Inform You: Regret- it’s not a very nice or particularly useful feeling- but it is one that is equally shared by both sexes. However, women tend to regret things they had done whilst men seem to regret things they don’t.

Drexler finishes with this: “All of this being said, it’s important to recognize that the qualities men and women share, or don’t, are fluid and ever changing, and prone to shifting with time, experience, and relationships. We’re not stagnant beings. That is to say, keep picking up his socks and someday he might just pick up yours.”