What Mardi Gras Means To Me And My Rainbow Family I was born in 1978. The youngest of three girls, to loving parents Lesley and Trevor, a middle-class family from South Sydney. As a typical ‘Stralian household, my birth was joyfully celebrated by my family (although perhaps not my middle sister who has still hasn’t recovered) and friends. I had the usual suburbian childhood; attended the local preschool up the road, started kindy with my neighbours and grew up playing BMX Bandits, ET and Pound Puppies.

The same year, two other events happened that would later have a significant impact on my life.

On Saturday, June 24, several hundred gays, lesbians and straight supporters – some in fancy dress and some simply rugged up against the cold – gathered at Taylor Square and followed a truck with a small music and sound system down Oxford Street to Hyde Park. It was to be Sydney’s contribution to the international Gay Solidarity Celebrations, having arisen from the Stonewall riots in New York. As they walked along Oxford St, the police harassed the lead float along the route and when the march stopped in Hyde Park, where telegrams of support were to be read, police confiscated the lead float truck and arrested the driver. Angered by this, 1500 revellers diverted up William St to Darlinghurst Road, where the police had closed the road. At this point the police swooped and violently arrested 53 men and women, many of whom were beaten in their cells (ref Sydney Gay & Lesbian Mardi Gras).

This was to be the dawn of the Sydney Gay & Lesbian Mardi Gras as we know it today. 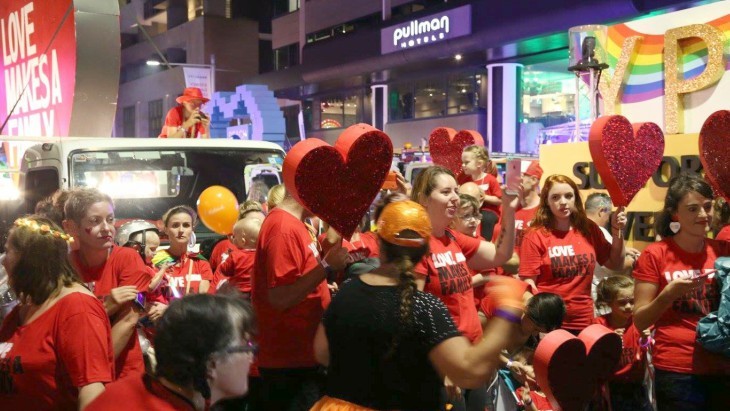 Exactly one month and one day later, Louise Brown, the world’s first “test-tube baby,” was born in the UK, much to the delight of her own loving parents Lesley and John, who in turn, had become the first people ever to successfully undergo in vitro fertilisation (IVF). Her birth was clouded by controversy; religious leaders preached the downfall of mankind and a bitter hate campaign was launched against her parents with one piece of paraphernalia suggesting that you could keep a test tube baby in a toilet bowl or fish tank (ref The Telegraph UK) How her poor parents were able to get through such a horrible experience is extremely admirable.

I am now a mother of my own test tube babies, two stunning little boys, brought into the world by a mountain of love. My partner and I have been together for almost a decade. We have attended countless family weddings with teary smiles, created a family, bought a house, travelled the world, paid our taxes and built a home. Just like every other typical middle class ‘Stralian household. But unlike my next-door neighbours, I run the risk of losing it all without the safety of a piece of paper.

Sitting in front of the TV on August 7th, 2017, my supposed supportive Prime Minister announces that he will honour his parties election promise; the country will tick a box to decide if I am to be afforded equal civil rights.

Are you kidding me?! My legs buckled from under me in shock. I fell to the floor and gave out a gut-wrenching wail. I felt utter degradation. I felt invisible and I felt worthless. The pain running through my body in that moment is something perhaps only other LGBTIQ people will ever understand. My family, my poor beautiful innocent boys were about to be pulled apart and judged for nothing more than a political game of charades.

I will never forgive you Malcolm Turnbull for the pain that you caused my community. I will never forgive you for the teenagers that attempted suicide because their parents ticked no. I will never forgive you for the humiliation of continually being forced to justify my life to strangers, who felt they now had an all access pass to say whatever they liked about my family on the street, in shops, on radio, on social media, on television, IN THE SKY, in traffic, at family functions, in our church - which preached Jesus’ love and then donated large sums of money to the “No” campaign, to “save the downfall of mankind” (really? Still beating that same old drum?!)..…….Malcolm, you threw us in the middle of the Colosseum surrounded by lions and when we fought back, you accused us of foul play.

So, we did what we do best, we stopped fighting. We turned our backs on you, we came together as a community, wrapped our arms around each other and we shared love.

"For love is the greatest thing in our lives, to love and be loved, you share it".

And of course, you know what happen next, LOVE WON.

Naturally we are beyond thrilled to now have the right to marry but the flip side is that we now also know exactly who in our family tried to prevent that from ever happening, so our weddings will perhaps be less focused on the seating chart (BECAUSE UNCLE BRIAN WON’T BE INVITED) and more focused on our love.

On Saturday March 3rd, in this year of my 40th birthday, my little family and I will be marching in the 40th Anniversary Sydney Gay and Lesbian Mardi Gras with a wonderful bunch of people we are proud to call our community and friends, Rainbow Families. Some have asked why we are still marching when marriage equality has been achieved? Our answer is a simple one; complete equality.

We dance to affirm that all families are made with love and have value.

As a community, we hope you will dance with us this weekend. Celebrate our love for each other, our love for our children and our families.  Join several tens of thousands Gay, Lesbian, Bisexual, Transgender, Intersex, Queer and straight supporters – some in fabulous black and gold fancy dress and some simply rugged up against the cold – as we gather at Hyde Park to follow our truck, with music, up Oxford Street, with love in our heart and raised voices singing these immortal words of our dearly beloved Cher:

I got you babe 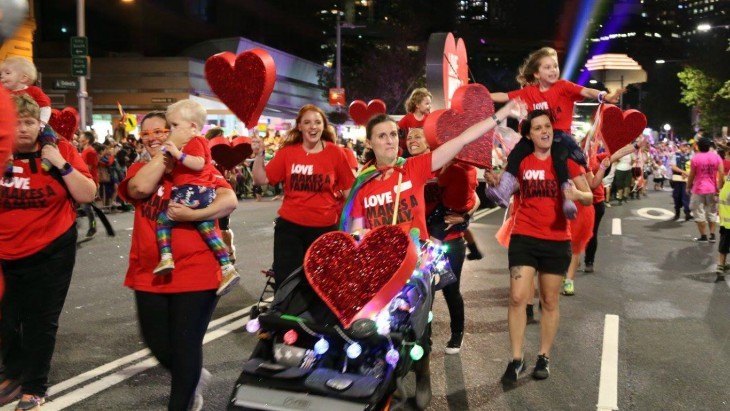 A special thanks to the wonderful members of the Rainbow Families online community, who shared their thoughts and hearts with me for this article. Together we sparkle xx