What Happens When Fussy Eaters Grow Up? 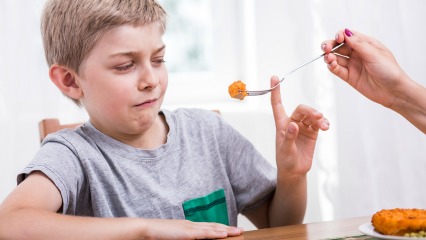 Particular brands of peanut butter, entire colours that are off-limits (usually green) and crusts that simply MUST be cut off before the bread touches the plate. Meal times with fussy eaters are nothing short of a nightmare. Some parents might just be happy to get their kids to eat anything that isn’t dessert, whilst other stress about the nutritional deficiencies and long-term bad habits that could arise from all the fussiness.
It seems that there are conflicting perspectives floating around regarding fussy eating- do kids grow out of it? Does is shape their long-term wellbeing? What’s life like as a fussy-eating adult? Here are some answers to your questions. Children who are fussy eaters make mealtimes a total battle. The Huffington Post talked to some child psychologists about why children refuse to eat certain foods, and how parents can cope with these frustrating idiosyncrasies. Dr Gillian Harris said: “A good way to get into the mind of a fussy child is to think of a food that you really can’t cope with, maybe bananas, mushrooms, shellfish, eggs? What is going through your mind – disgust? And if I tried to make you eat your horror food – anxiety and then fear. It’s not just about being fussy, it’s a genuine feeling of panic.”

Picky eating causes parents stress because they worry that their child won’t receive all the nutrients they need, and that these bad habits will continue into later life and cause lasting problems and health issues. According to Dr Lee Hudson, parents shouldn’t be so worried. She told The Huffington Post: “Most children and young people will change what they are willing or interested in eating through their lives, often in conjunction with periods of growth spurts. The important thing for parents is not to panic as most children who are picky will either be going through a phase, and will still have enough food to grow and develop properly.” According to The Guardian, one study showed that rather than simply ‘growing out of it’, picky eating in kids was linked to a greater chance of symptoms related to depression, anxiety and ADHD. Psychologist Nancy Zucker of Duke University told The Guardian that highly selective eating could even be linked to impaired social functions- birthday parties, school camps and restaurants become minefields to be avoided. Sucker says that for some children, their eating habits are so extreme, that when given new foods, children literally gag. “It’s so repulsive to them that their reflexive gag response will kick in,” she said.

Apparently, researchers found that in a survey of children aged 2-5 years old, 20.3% of them were ranked as having moderate to severe fussy eating habits or “avoidance/restrictive food intake disorder”. These kids were twice as likely to have behavioural problems outside of school, as well as showing symptoms associated with ADHD, separation anxiety and general anxiety disorders. Of the survey results, Zucker told The Guardian: “What I don’t want to do with the reporting of the story is to create panic among the parents. To pathologize something that’s not pathological.” She says that if parents are truly concerned and eating habits are truly worrying, it might be time to seek professional help. Katelyn Fagan from Whats Up Fagans is a self-confessed picky eater, who blames her bad habits that have continued into adulthood on her mother who never forced her to eat all the components of her dinner if she didn’t want to. Fagan says that being a fussy eater as an adult is tricky, and that people often think you’re babyish, rude, unadventurous, difficult, as well as having to receive the constant stream of typical questions including “have you ever tried it?” and the jarring “you’re missing out.”
When it comes to her own kids, Fagan said: “As an adult, I see the consequences of my mom’s parenting choices in this regard, and let me just say, I’m choosing differently for my kids. We are currently working through our own kids’ picky eating habits (and it seems to be that picky eaters breed more picky eaters)….”

Are your kids fussy eaters? Were you a picky eater who turned out just fine? We want to know! Comment below.