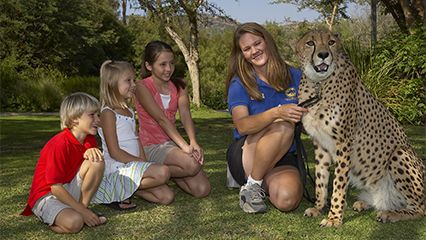 Under a 2hr drive south of LA lies the US city of San Diego; a fabulous family holiday destination combining a sunny climate, beautiful beaches, world-class attractions to keep the whole family entertained and plenty of interesting suburbs to explore.

Holiday time is precious and limited so if you’re trying to pack in the best of San Diego into a week’s family holiday, we’ve put together the perfect itinerary ensuring you get the most out of this wonderful destination.

What’s more, don’t miss out on your chance to win a $15k dream family holiday – see details below.

Where else can you see a grizzly bear, a herd of elephants and giant pandas in one place? The San Diego Zoo is home to over 4000 animals, including many rare and exotic species, housed amid 100 acres of tropical gardens. Other popular activities include a three-mile guided bus tour, sky tram, children’s petting zoo and baby animal nursery. Uncover the wild habitat of green turtles, sharks, stingrays and coastal birds in San Diego Bay at the Living Coast Discovery Centre, a not-for-profit zoo and aquarium. Explore the amazing array of animals and plants that make this coastal region home through lots of living and interactive displays. Learn about the ocean’s fascinating creatures from beluga whales and bottlenose dolphins to penguins through interactive displays, rides, educational close-ups and six daily shows…it’s all happening within the 189-acre SeaWorld San Diego park. For a change of pace, go step aboard USS Midway, a real aircraft carrier. It’s been voted a Number 1 attraction in the Trip Advisor Awards and has something to offer the whole family. Climb aboard an aircraft and sit in the cockpit. Ride a flight simulator or try an ejector seat. Take the family to sea without leaving the port! Kids can paint, draw, design, build and create at The New Children’s Museum for families with hands-on fun to stimulate inquisitiveness and learning. The museum is downtown San Diego’s first public ‘green’ project with environmentally friendly architecture including the use of recycled building materials, water-saving devices and natural convection cooling.