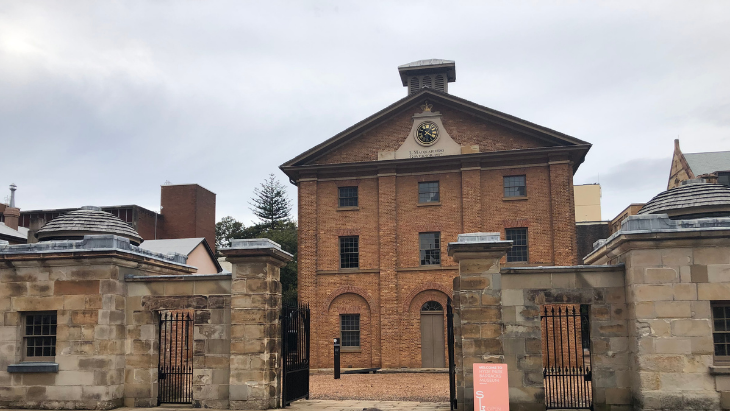 With exotic trips overseas off the cards these summer holidays we decided we would make it our mission to visit all the historic houses in Sydney, to keep our 7- and 9-year-old girls’ minds learning, inquisitive and active over the summer break.

We started our trip to the Hyde Park Barracks to explore their new Kids’ Activity Trail. To say the kids were excited is an understatement. To get there we parked in the Domain Car park and as we walked through the tunnel on the travellator, Miss 7 excitedly asked if this was what we had come for, as it was the longest travellator she had ever seen. For those kids that miss the travellators at the airport, this is a wonderful substitute!

The excitement continued and upon arrival, each member of the family was given an audio guide headset and an iPhone on a lanyard to adjust the volume of the sound. There was an adult and kids' version of the audio guide and the kids' version was accompanied by an Activity Trail booklet that was filled with clues about different things to spot and activities to complete in each section of the museum.

The tailored audio guide kept the kids entertained and completely engaged for a full 1.5 hours, while taking them through the history of the colony and what it was like to live at the Hyde Park Barracks. The walls of rooms were enveloped by pictures of the colony that immersed you in the scene. The kids were asked to find different parts of the images, such as a man chopping a log with an axe, while learning about the different jobs that the convicts did within the colony.

The kids also got to learn about living conditions in the Hyde Park Barracks while lying in a hammock where the convicts slept. You could hear the sounds of convicts chattering and coughing. They also learned about the gloopy porridge and watery stew of meat and vegetables that the convicts ate for dinner. When asked what food she would miss if she was a convict, Miss 7 promptly replied that she would miss McDonalds.

As well as incredible pictures on the walls, the exhibit included detailed models. We saw a model of a quarry where stone was dug out to make buildings. The kids learned about how trees were cut down and made into beams and planks for the buildings all over NSW, and how if prisoners did not behave, there were severe punishments such as solitary confinement, walks on treadmills with endless stairs and the possibility of being sent out in iron chains to build the roads in NSW.

The exhibition also touched on the conflicts with the Aboriginal people during the early years of the colony and post-1848, when the Barracks no longer housed convicts. The Barracks became a female immigration depo from 1848 to1997 and there were many artefacts from the period that were on display, some of which were originally found beneath the floors of the building. The kids needed to tick some of these items off in their activity guide including a 150-year-old egg, dominos, a thimble and gloves.

In the words of my 9-year-old "The headsets and activity guides were easy for the younger kids to understand and the models were smart and detailed." The kids left with a new appreciation for the history of Sydney and paid particular attention to St James Church on the way out, as we had seen a miniature model of the Church alongside the Hyde Park Barracks in the exhibition. We would recommend the Hyde Park Barracks as a fun and interesting activity.