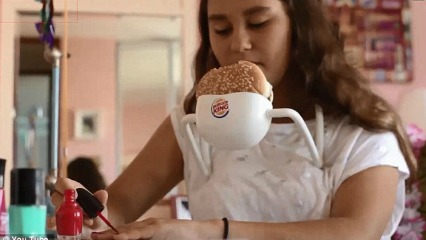 For busy mums who could do with using their hands during meal times, this might be the product for you! Imagine all the tasks you could accomplish without the burden of holding your own burger. Check out the hilarious video that left us with the question: is this a joke??

Back in June, this video advertisement was made in Puerto Rico and released online, sending burger lovers (and lazy people) into a frenzy. Fifty free holders were said to be given away at the Puerto Rico Hungry Jacks chain that was celebrating it’s 50th anniversary, and the video was shared to the Hungry Jacks website, but has since been removed. We were relieved, but kind of sad, admittedly, to find that this was all a hoax! This product was never even made, let alone handed out for free. Burger King released a statement to CNBC clearing up the confusion that read: “The video featuring a ‘hands-free’ Whopper Sandwich holder was produced by an agency in Puerto Rico to celebrate the brand and the iconic Whopper Sandwich in a humorous way. However, the product depicted in the spot was not produced, or distributed to guests as some reports indicate.”

We can’t help but imagine what we’d accomplish with the ‘Hands-Free Whopper.’