Sign Us Up! A Gym Class Where All You Do Is Sleep It's called 'Napercise'- a workout we definitely think we could stick to! David Lloyd Clubs, a gym in the UK, is offering group sleeping classes, and tired parents are total fans. Being 'too-tired' is now no longer an excuse to skip the gym!

The 1-hour class consists of a solid 45 minutes of uninterrupted sleep, 15 minutes of stretching as well as a bed, eye mask and blanket. The room is pre-set to a temperature proven to burn calories, and typical gym tunes have been swapped for meditative, relaxing music and nature sounds. The classes have been designed to "reinvigorate the mind, the body and even burn the odd calorie", so if you can get past the idea of sleeping in a room full of strangers, this just might be the concept you've been waiting for. 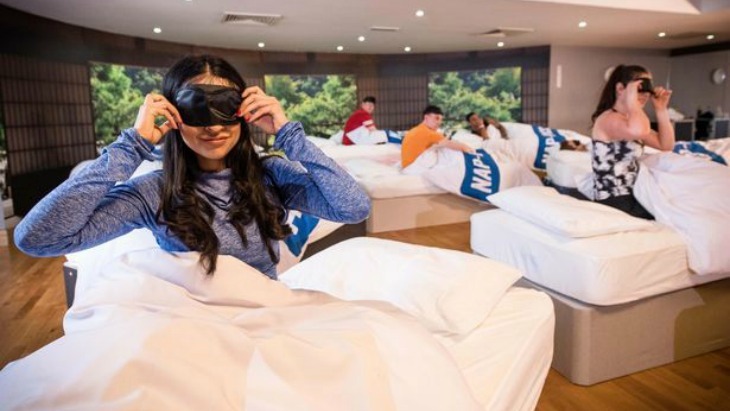 The classes are an initiative from David Lloyd Clubs to combat the "tiredness epidemic" sweeping the UK- and mums and dads of small children, in particular. A whopping 86% of parents claim to be fatigued, with 26% saying they get less than 5 hours of sleep per night. One in five have admitted to taking a sneaky nap at the work desk- no judgement here!

Don't think a 45-minute cat nap could do much good? Think again! According to Mashable, a college in Pennsylvania found that people who take a 45-minute nap in the middle of the day better cope with stress than those who don't nap. Backing that up, the UC Berkely found that an arvo kip boosts the brain's learning capacity. Do you need any more convincing? Get napping (if the kids allow you!).

Tiredness Infiltrates All Aspects Of Life

The classes were co-designed by Dreams sleep expert Kathryn Pinkham. She told the Birmingham Mail: “Sleep is a lot more important than people realise. We tend to focus on the short-term effects such as being tired or lacking concentration, but it is also essential for our long-term physical and mental wellbeing too." Pinkham says that tiredness then spills over to other aspects of life, making a person more likely to ditch exercise, not make smart decisions about the food they consume, as well as gradually becoming anxious or even depressed.

David Lloyd Clubs told the Birmingham Mail: “We’re always looking for new ways to tackle the issues that everyday families face, which is what Napercise sets out to do. Filling an exercise studio with beds might look unusual, but if it proves to be a success, we’re definitely excited at the possibility of rolling out the programme to more of our clubs down the line.”

Fingers crossed they bring this concept to Sydney....