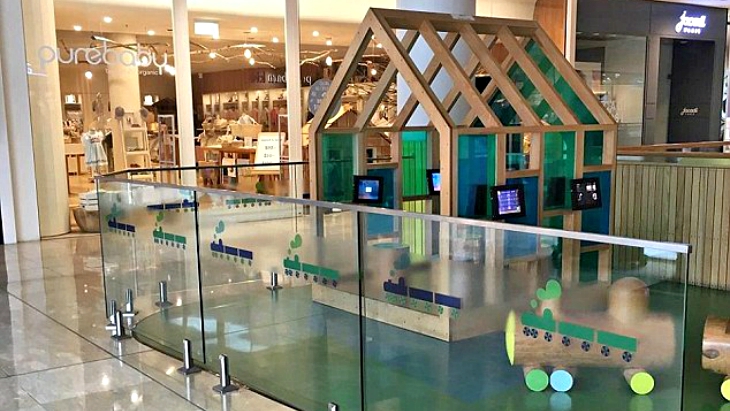 Ah shopping centres. A haven for coffee, a place to let the kids play in a shaded and contained area, a respite for weary tired parents. And I suppose, yes, a place to shop.

I am guilty of using the local shopping centre as a place to entertain the kids on a rainy or hot day, or even just a day when I need to get the wild monkey out of the house. When I look around I see like-minded parents craddling coffee and looking half-disheveled, half-proud that they have made it out of their pajamas. The centre play area is a place where we can sit down for five minutes and feel pleased that our kids are playing, exploring, socializing, working on those all important skills like sharing (hmmmm) and communicating (hmmmm, "say thank you, Billy"). A place where no guilt exists. Until now. What's with the TV screens that are popping up in the fancy new play areas?

Look, I am not against screen time, I've been known to use it as a digital babysitter and calmer of tantrums on many an occasion. But is there a need for cartoons when kids are meant to be playing? Take a look at the new 'play pod' at Sydney's Chatswood Chase. The shopping centre recently unveiled its improved play area complete with glass gates, seating, a giant television screen and iPads. Even my local centre at Marrickville has a TV with ABCKids on in the play area of the parents room.

Make Yourself At Home

Over at Chatswood I do love the play area's giant wooden house and train, but I am a little concerned about the seats placed in front of screens mounted along the window sill. It's like come on in kids, sit down, relax and get into the digital zone. In reality it probably wouldn't be this way, but it does send a bizarre message to kids.

Shopping centres are desperate to bring in the herds and no doubt the threat of Amazon et al is hitting them hard, but this seems like a cheap card to play to get our kids in the doors. It feels a little bit like the old 'ladies drink free nights' which is really about getting the male punters into pubs. (Ammirite, ladies?!)

It seems I'm not alone, many took to Chatswood Chase's Facebook page to voice their disappointment:

One woman said: 'The iPads and screens are awful... I avoid taking kids to Chatswood Chase now.'

However, other parents were quick to defend the play area, with one saying: 'It's not a daycare centre, it's a short term activity for children.' Screen Time On My Time

I take my son to shopping centres so that he can physically play and to make the grocery shopping chore all the more fun for him. The shopping centre play area has always been a bit of a happy compromise for everyone. As parents we try to alleviate our guilt where we can and limit screen time where possible. It should be something that we can control and call the shots on.

If I wanted to prop him up with an iPad to get some peace I'd do it at home. At least then I could acceptably wear my pajamas....