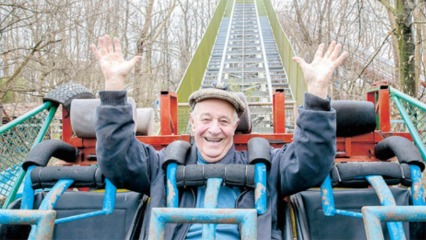 Meet the 79 year old Italian man who gives meaning to the phrase “young at heart.” The incredible Bruno of Treviso, Italy, has built a 45-ride electricity-free amusement park over the past 40 years with his bare hands.


You’re Only As Old As You Feel

At this amusement park, you’ll find roller coasters, ferris wheels, swings, slides and more, operated by muscle power and gravity. According to elitereaders, Bruno began the project about a month after the opening of his restaurant Ai Pioppi, opened in 1969. Reportedly, he asked for the help of a local blacksmith who was time poor, so Bruno had to teach himself how to weld. As heard in the video, Bruno creates the rides first in his mind which acts almost like his own internal sketchpad. When elitereaders asked him what his favourite park attraction was, he responded: “You can’t ask a father of 10 to choose between his children.”

We think Bruno would make one hell of a grandfather.