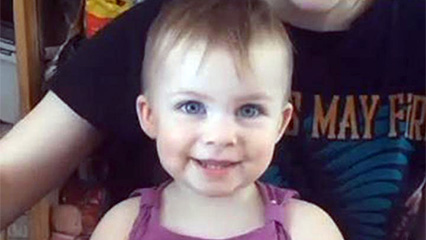 Just over a week ago, 2 year old Mirranda Grace ran into her mother’s bedroom in Richmond, Virginia USA, her eyes bulging and fell to the ground. Her parents had no idea what was happening. They searched her mouth but found nothing. Her father, Patrick Lawson, started CPR.

By the time the ambulance had arrived, Mirranda’s heart had stopped. She was taken to the Children’s Hospital at Virginia Medical Center, where she was intubated and placed on a ventilator but has been unresponsive and on life support ever since.

The cause of this terrible tragedy…a small piece of popcorn.

Mirranda’s family firmly believes she is showing signs of improvement and, is confident more improvements will come over time. Doctors wanted to carry out tests to assess her brain stem activity, and ultimately whether to turn off her life support. But her devastated parents, Patrick and Alison, attempted to delay the tests by filing an emergency injunction. However, the emergency injunction was overturned on Friday by a court judge, signalling the start of the tests.

Choking – A Major Risk For All Children

Mirranda’s case is a terrible tragedy and our thoughts go out to her and her family.

Unfortunately, choking is an all-too-common occurance in young children. Around 500 children are admitted to Australian Emergency Departments for choking. It’s a particular risk for children under the age of eight with around 60% of admissions attributed to food becoming lodged in the airway.

What To Do If Your Child Is Choking

Top Things To Do If A Child Chokes