How Much Do Your Kids Really Need To Eat? 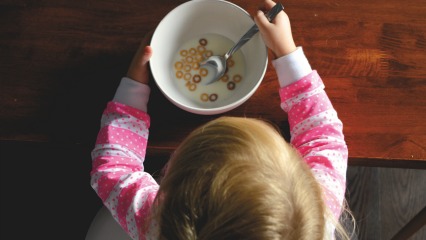 Fussy eaters that won’t go near anything green, children that refuse to eat breakfast, children that only want sugary treats….there’s a plethora of issues parents face when it comes to kids and food. When the night is over, we don’t blame you for just being happy that your little ones got through the day with seemingly plenty of energy, and that the battle is won for another day, not stopping to consider how much, how little, or how quality the food you are giving them truly is.

According to The Daily Telegraph, 1 in 4 Aussie kids and teens have a significant weight issue, their diets consisting of far too many junk foods. For toddlers, it seems that up to 30% of the calories they ingest come from junk foods, whilst junk foods account for 40% of a teenager’s calories. The cause? Apparently, it’s due to a culture of overeating- consuming more calories than needed. So, how much do children really need? We bet it’s not as much as you think! Differences in calorie requirements for this age group depends heavily on activity levels, according to The Daily Telegraph. Children who are extremely active could require up to 500-600 more calories per day than an inactive child. A sign of overeating at this age is weight around the abdominal area, so if your child claims to be hungry often but is carrying some extra fat in that area, you know why! Pre-teens require around 1400-1800 calories per day. Check out The Daily Telegraph’s pre-teen meal plan, consisting of 1700 calories.
Breakfast: Ham and cheese toasted sandwich = 300 cal
School: Cut up salad = 60cal, 1 fruit = 80cal, Popcorn = 60cal, Cheese and crackers = 150 cal, Tuna and avocado bread roll = 250 cal
After school: Toasted sandwich = 300 cal, Homemade milkshake = 200 cal
Dinner: 2 lamb cutlets + 1 potato + peas = 300 cal