ellaslist Was Wowed At the Wings Over Illawarra Air Show 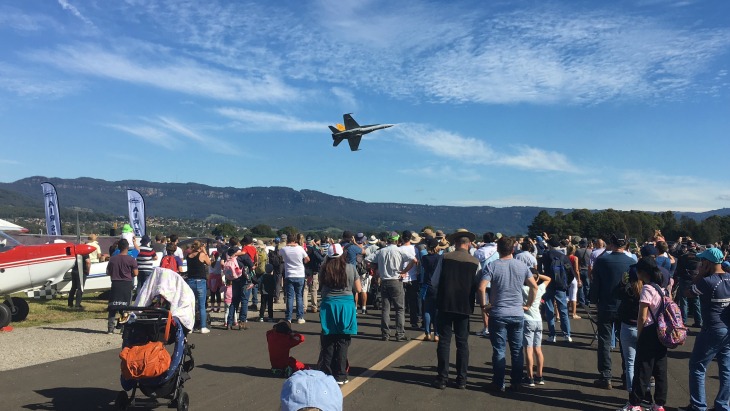 The Wings Over Illawarra Air Show is held annually at the Illawarra Regional Airport.  The drive from Sydney takes just over 1-hour and is 15 minutes south of Wollongong. Train travel is also a great option with extra carriages put on for the event and the station only a 50m walk from the entry.

There is plenty of parking with two large sporting fields operating as offsite parking. There is a parking cost of $5 which is donated to the NSW Rural Fire Service and this price includes a short shuttle bus ride to the airfield. 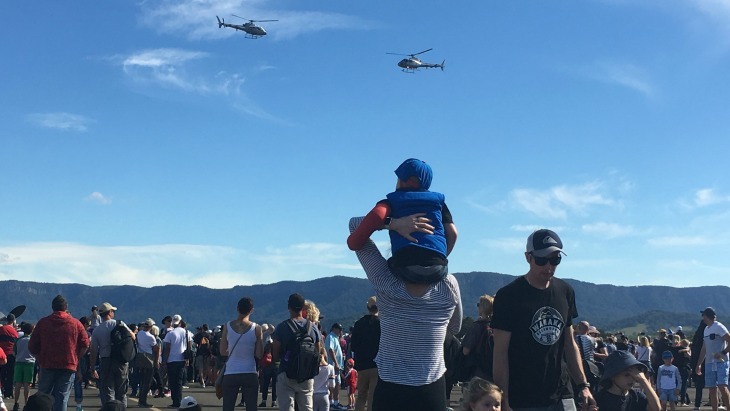 The 2017 event was held under beautiful blue skies and perfect crisp autumn weather which made the air show the ideal day’s adventure for Sydney families.  You can buy tickets online to skip the queues at the gate, but there weren’t too many lines regardless.

There is lots to see and do at the Air Show.  The gates open from 9am – 5pm and the flying displays run from 10.30am – 4.30pm. The flying displays were magnificent.  We saw beautiful acrobatic gliders, wild and windy helicopters, restored WWI planes, and vintage WWII aircraft simulating battles.  But by far the most exciting aircraft were the RAAF F/A-18 Hornets!  We had only just arrived at the show and were getting our bearings when the Hornets positively thundered into view.  They were spectacular and LOUD – really loud!  Whilst we had expected noise we were not quite prepared for the rush of the hornets flying past.  Our 6-year-old explorer declared that he could “feel them in his chest”. The noise for most of the day wasn’t too bad but it might be worthwhile considering ear muffs or ear plugs for some children. 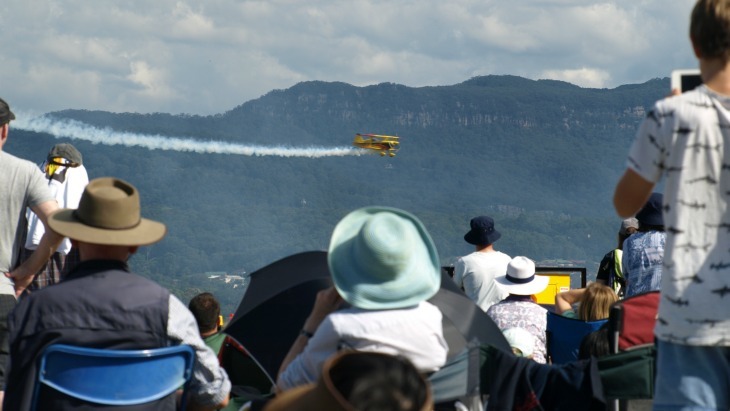 The great thing about the airfield is that there is plenty of grass and open space, but there is very little shade. Luckily most of the action is in the sky so there are lots of excellent vantage points.  We took a large picnic blanket and chairs and chose a spot near the runway where we could see the planes taxing out to perform and then watch them zip through the sky.

Once we had set up our little home base, the adults took it in turns to wander with the children and visit all the exhibits. It was also nice to have downtime just sitting together watching the planes and munching on snacks. Colouring books or toys and games might be beneficial for some children. There were a few food stalls but given the amount of people in attendance the lines were long at peak times. We took a picnic lunch and lots of snacks. A Touch Of History

The really fast and noisy planes were a hit, as were some of the acrobatic flying sequences.  Personally, I really enjoyed some of the more dramatic sequences where the pilots flew in loops, or directly up into the sky until the engines stalled and then you watched them twist and plummet back towards the ground before zooming off.

The Illawarra Airfield is home to the Historical Aircraft Restoration Society.  They had opened their hanger and there was the opportunity to wander around among a variety of different aircraft. Several planes were open for you to have a look inside- some for a small donation. The lines for each of the plane tours were not particularly long and most of the exhibits were watched over by very knowledge guides, which was great fun. 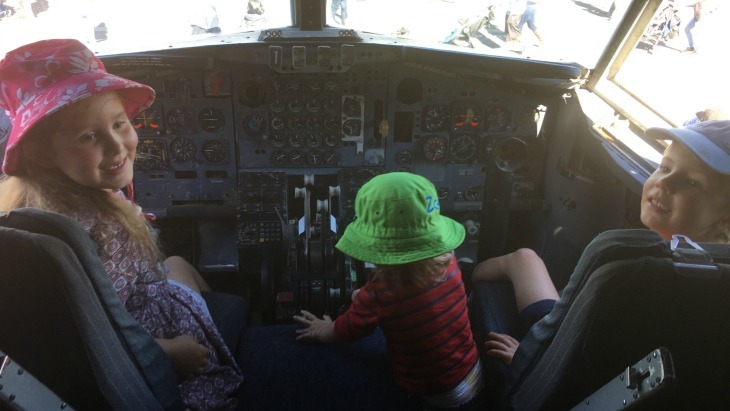 There were lots of stalls selling everything from showbags and model planes to t-shirts and hats. Additionally, there was a group of rides for kids. These were all FREE and it was a good way to break up the day and wear off some energy.  There were also antique cars and motorbikes to wander through. It was also possible to book a joyride in a helicopter. While that was not in our budget, there were copters taking off every few minutes and the kids really enjoyed watching them take off and land. 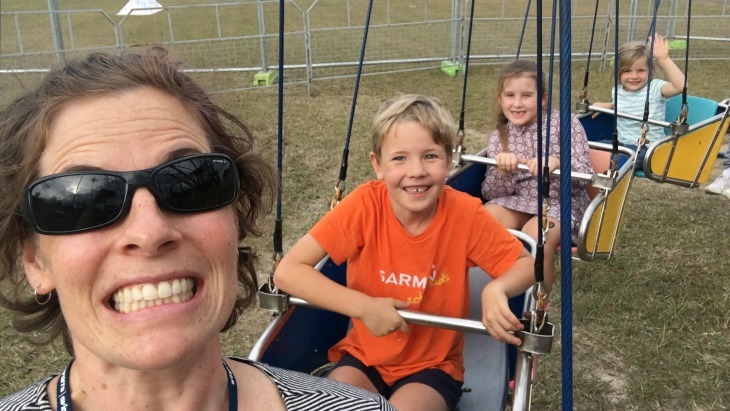 Towards the close of the day, we discovered a whole separate section on the southern side of the main runway where lots of smaller planes had parked.  There was an excellent demonstration of WW1 army paraphernalia including a Jeep the kids could climb on, a large rotating gun that historically dressed figures were operating, and very entertaining “officers” demonstrating how to load and fire various rifles and handguns. 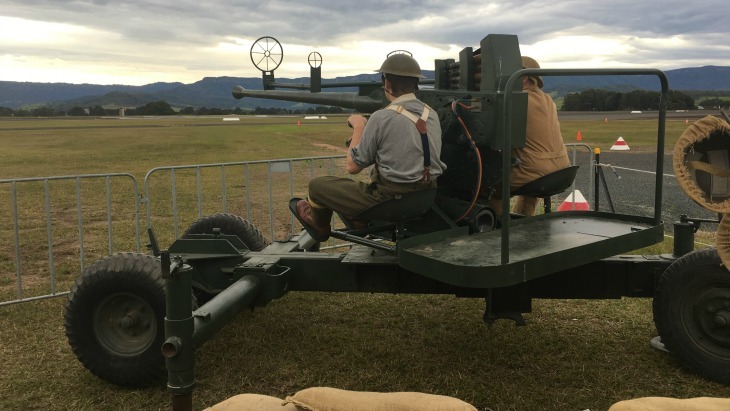 It is worth hanging around for the end of the flying show. The very last fly featured the Hornets again and it was thrilling to watch, especially the wall of fire on the last run of the day!

We left the show with masses of other people.  There was a bottleneck getting through the gate and onto busses, so we decided to walk the 1km back to the car rather than wait.  Traffic around the parking and on surrounding roads was busy for the first part of our journey home but we moved steadily as the kids shared their favourite moments.

The Wings Over Illawarra Air Show is spectacular, well organised, and a great day for the whole family. 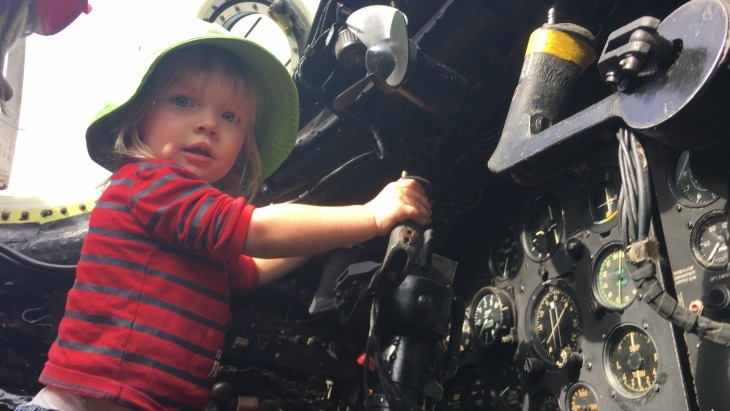