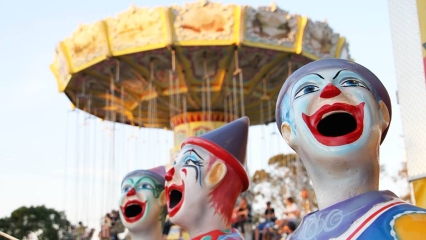 Check out this review of last year’s Fisher’s Ghost Carnival. Gemma, our ellaslist explorer, along with her two daughters, took in all the fun of the fair in Campbelltown in 2015. The 2016 Festival of Fisher’s Ghost kicks off for 2016 on 4 November until 13 November.

As we drove towards Bradbury Oval, Miss 5 spotted the Fisher’s Ghost Carnival; excitedly pointing out the lights and rides and Miss 10-Months joined the excitement feeding off her sister! As we pulled in to the parking area, we were met by a well organised parking system (my fears we would need to park miles away quickly disappeared), and we were directed to parking behind the carnival which was well lit and had plenty of spaces.

The carnival was absolutely buzzing with positive energy; families chatting and laughing, kids squealing as they went on thrilling rides and music from the various stalls. We couldn’t wait to get started!!

As it was a Friday night we had the option of an unlimited rides wrist band which is excellent value ($30 pre-purchased or $37.50 if purchased onsite). One other nights, you can buy single coupons ($1) or packages of 30 ($25) or 60 coupons ($50). The carnival had an amazing variety of rides for all ages and the rides all appeared to be in great condition.

Miss 10-Months had a ball on the merry go round and was beaming smiles and squealing as she went around and around on the motorbike and cars (she had several turns).

I Believe I can Fly

Her absolute favourite was the fantasy flyer (swinging chairs) and she too had several turns on this attraction. While operators in most fairs are stony-faced and bored, the ones at Fisher’s Ghost had great engagement with the kids – telling riders to flap their arms, run with their legs and move faster. Miss 5 was super excited that she “really was flying”.

Older children and grown-ups aren’t forgotten and there is a great selection of rides for the more daring. Hubby loved the racing simulator and the adrenaline-pumping Phillip Island Superbikes and Bathurst V8’s. Wait times for rides were reasonable, with the longest wait time being approximately 10 minutes for the bumper cars.

The carnival has many side show attractions; laughing clowns, raffles, fishing ducks, darts, bottles and basketball, just to name a few.

There were several food options to choose from and they didn’t disappoint. There were the traditional hot dogs and chips as well as pasta’s, fresh donuts, gourmet German sausages, ice creams and the biggest frozen drinks I have ever seen (it was literally 2/3’s of the size of miss 5!!).

The show bag truck is filled with goodies for all ages. Miss 5 took her time picking “just the right show bag” and the staff were helpful and patient. There was a great selection ranging from traditional chocolate and lollies, Sydney Swans, choices from various Disney movies, favourites from ABC kids and even something for mum and dad with a Big Bang Theory bag. Show bags begin at $4 and range up to $30.


Find out more about the Festival of Fisher’s Ghost and the Carnival, including ticketing prices for rides (entry is FREE!) and other events running during the festival.